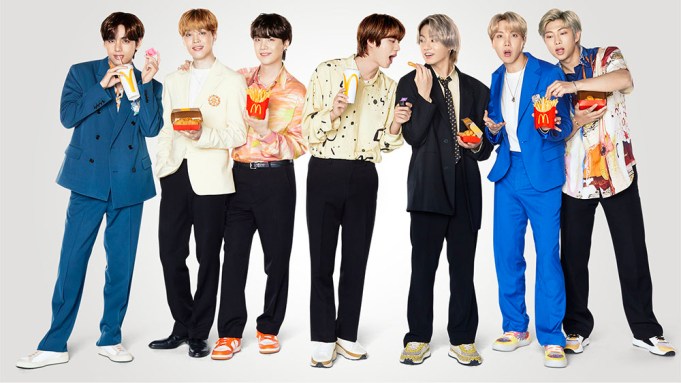 BTS’ collaboration with McDonald’s arrives as participating restaurants in the United States today and includes the BTS meal, a variety of merch and four weeks of digital content featuring the band.

The official BTS x McDonald’s merch line drop at 7 p.m. EST on the Weverse Shop app and includes hats, tote bags, hoodies, bathrobes, socks, sandals and more, and is inspired by some of the hand-picked menu items from the band’s signature order.

In addition, McDonald’s debuts a new TV commercial today featuring BTS’ new song “Butter,” which has already broken streaming records on its first 24 hours out. As Variety reported on Tuesday, “Butter” has achieved the rare distinction of being added to all Top 40 stations in the U.S.

Said BTS member RM: “It’s awesome to have our new song in the ad. Smooth like burger! It’s an energetic and fun song that really matches this commercial.”

Also on deck: four weeks of never-before-seen digital content featuring the band, viewable exclusively on the McDonald’s App in the U.S. starting today.

“We have so many favorites at McDonald’s,” added Jimin. “We like sharing Chicken McNuggets and fries. But during my high school days I ordered a Big Mac whenever I had pocket money.”

The BTS collab is the latest installment of McDonald’s Famous Orders program, which featured partnerships with J Balvin and Travis Scott, whose order marked the first celebrity meal at the fast-food chain since Michael Jordan’s 1992 McJordan burger.

The Travis Scott Meal, which included a Quarter Pounder with cheese, bacon, lettuce, pickles, ketchup and mustard; medium fries (with BBQ Sauce for dipping); and a Sprite, was accompanied by a popular merchandise line and led to a viral TikTok trend in which customers pulled up to the drive-thru blasting the artist’s hit song “Sicko Mode.” According to USA Today, the Travis Scott Meal contributed to a shortage in key ingredients at McDonald’s due to overwhelming demand.