Britney Spears Allowed to Hire Her Own Lawyer, After Tearfully Demanding Father’s Removal From Conservatorship 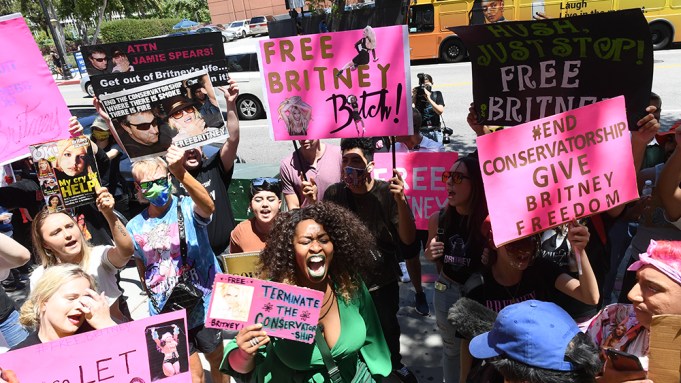 Britney Spears broke down in tears in open court on Wednesday, making a tearful plea to the judge to remove her father from her conservatorship.

“I’m here to get rid of my dad and charge him for conservatorship abuse,” Spears said via remote video. “I want to press charges for abuse on this conservatorship today… all of it.”

Moments ahead of her voluntary testimony, Judge Brenda Penny granted Spears to hire her own lawyer, Mathew Rosengart, who attended the hearing in-person, representing the singer, who appeared remotely via phone. The judge’s move to allow Spears an attorney of her own choosing is a major step forward for the pop star, who wants to terminate the conservatorship she has been under for the past 13 years.

“I’m here now today, your honor, to remove my dad altogether,” Spears said. Prior to speaking, Spears had initially asked the judge if the courtroom could be cleared, but then told the judge she was fine speaking in open court.

During her impassioned plea, Spears demanded to be released from her conservatorship without further evaluation, telling the judge, “Ma’am, there should be no threat to me — at all, ever.”

Spears explained to the judge that she took psych tests “against my will” during her “Circus” tour and was forced to get blood drawn numerous times per week. She said that her conservators told her that if she participated in the evaluations, she could have her life back. “I did it all and they lied…they did nothing,” Spears said. “They didn’t end it, and I kept working.” She said she will not allow people to “question my intelligence for the millionth time.”

Spears said she is not a “perfect person,” but explained that her “episodes” have been a result of “what they did to me.” Slamming her father and her conservators, she told the judge, “It was their goal to make me feel crazy, which I’m not.”

The singer made more claims against her father, including getting her driver’s license taken taken away, not being allowed to drink coffee, not being able to chose what she wants to eat and having her “pink hair vitamins” taken away from her. “That’s not abuse. That’s just fucking cruelty,” she said, then apologizing to the judge for her language.

The star also said that she has “serious abandonment issues” and said that her conservators knew that she was “vulnerable,” but she would be left alone and not able to leave her house. She explained that growing up, “I was always extremely scared of my dad and scared he was going to show up drunk somewhere.”

“Instead of trying to investigate my behavior or my capacity, I want my dad investigated,” Spears said to the judge. “This conservatorship is literally allowing my dad to rule my life…that is abuse, and we all know it.”

Once again stating that she wants to press charges for conservatorship abuse, a defiant Spears said, “I’m angry, and I will go there.”

When she paused and broke down in tears, the judge took a sensitive approach, telling the singer: “Ms. Spears, it’s okay. If you need a moment, it’s fine.”

Spears confirmed to the judge that she selected Rosengart as her own lawyer, and also stated that she wants her temporary conservator of her person, Jodi Montgomery, to remain on her case. Montgomery’s lawyer categorized Spears’ testimony as “heartbreaking,” and told the singer, “We’re here to help.”

Following Spears’ testimony, Rosengart called for Spears’ father, Jamie Spears, to voluntary resign, which he said, would be in the best interest of his client. “This is not working. What is supposed to be at the heart of this has been lost,” Rosengart said, adding that he is “appalled” at Jamie Spears. “There is a real question as to why Mr. Spears does not voluntarily step down today,” Rosengart said, before posing, “Is he here for financial reasons? Does anybody really believe that Mr. Spears’ involvement is in the best interest of his daughter?” Rosengart said “if he loves his daughter,” he will resign. In response, an attorney for Jamie Spears, Vivian Thoreon, said the elder Spears would not voluntarily resign and questioned the accuracy of his daughter’s claims of abuse.

Rosengart also told the judge that his law firm will be questioning whether the singer ever needed a conservatorship in the first place, in 2008. “A conservatorship was probably not necessary,” he said.

In addition to Jamie Spears, the singer’s mother, Lynne Spears, was also present via phone at the hearing. Her attorney said that he “agrees entirely” with Rosengart, and said that Lynne Spears is requesting to be back in court, sooner than later, to work towards her daughter’s conservatorship ending. “This system is broken,” her lawyer said. “This is lawyers gone wild.”

Ahead of the hearing, the #FreeBritney fans were in full force outside of the Stanley Mosk Courthouse, many dressed up in Britney merchandise and holding signs calling for the conservatorship to end. The media presence outside the courthouse was substantial with Los Angeles outlets and national entertainment shows swarming the scene, in preparation of the pop star addressing the court.

Rep. Matt Gaetz, R-Fla., who has welcomed Spears to speak in front of Congress about conservatorship abuse, addressed the crowd of Free Britney supporters. “There were grifters in this process,” Gaetz said. “They knew what she wanted. And now the whole world knows what Britney wants — it is the freedom and liberty that should be offered to every single American.” Gaetz also called Jamie Spears “a dick.”

As of this week, Spears had been in talks with Rosengart, who is a former federal prosecutor who has represented Hollywood A-listers like Sean Penn, Steven Spielberg, Julia Louis-Dreyfus and Keanu Reeves. Earlier in the week week, Spears had signed a legal document, selecting Rosengart. The paperwork stated: “Pursuant to my statement in open court on June 23, 2021, my rights, and my desire to end the above-referenced conservatorship as to my father, Jamie P. Spears, it is my desire to choose and retain my own counsel, at Greenberg, Traurig, LLP as set forth above.”

The hearing on Wednesday marked the second time this summer where the pop star addressed the court — this time, virtually at the Los Angeles Superior Courthouse. On June 23, when she addressed the court for the first time publicly in her 13-year conservatorship, Spears made her appearance by phone, making an explosive testimony, calling her conservatorship “abusive” and asking the judge to terminate it altogether.

Though she pleaded with the judge at the June 23 hearing to end her conservatorship without further evaluation, Spears has still not officially filed a petition to terminate her conservatorship — which could be explained by the game of legal musical chairs going on behind the scenes: over the course of the past couple of weeks, Spears’ longtime manager, Larry Rudolph, resigned after 25 years; wealth management firm, Bessemer Trust, pulled out as co-conservator of Spears’ estate; and her court-appointed attorney, Samuel D. Ingham III, asked the court to resign from the case.

At Wednesday’s hearing, Judge Penny accepted the petitions for Ingham Bessemer Trust to resign. Effective immediately, they are no longer involved with Spears’ conservatorship case, though formal petitions still need to be filed.

Prior to selecting Rosengart as her lawyer, Spears had been represented by Ingham, since the start of her conservatorship. During her June hearing, Spears said that Ingham advised her not to speak up. “He told me I should keep it to myself,” she told the judge, though Ingham has never responded to Variety‘s request for comment on this specific allegation, and private conversations between the attorney and singer are unknown. After the singer had asked the judge to allow her to hire an attorney of her choosing at her previous hearing, Ingham filed paperwork to resign on July 6. When Ingham was appointed as Spears’ legal representative in 2008, the star had no say, which is typical for a conservatorship.

After Ingham resigned, an attorney for Spears’ mother, Lynne Spears, filed paperwork, urging the court to “listen to the wishes of her daughter” and allow her to hire her own private attorney, saying such a move would be “a first step.”

“Clearly, Conservatee needs private counsel to advise her as to her basic rights in this conservatorship,” Lynne Spears’ paperwork stated.

In response to the singer’s blistering testimony where she made serious claims about her treatment from her father, Jamie Spears filed legal documents pointing the finger at the co-conservator, Jodi Montgomery, stating he is concerned about his daughter’s conservator of person. An attorney for Montgomery firmly shot back at the elder Spears’ claims and stated that Montgomery will not resign as Spears’ conservator; in her filings, she provided texts from the star in which she asked Montgomery to stay on board and help her obtain her own attorney.

Since, Spears’ father and Montgomery have been at odds over Montgomery’s request to have her security fees covered, as she has received death threats throughout the course of the high-profile conservatorship case.

On Wednesday, an attorney for Montgomery doubled down on the need for security, which Rosengart agreed with; the judge said that matter will be addressed next week.

Montgomery’s attorney repeatedly made clear that Montgomery has one motive only, which is to work in the best interest of Spears. During Spears’ testimony, through tears, she said that she wants Montgomery to help her get “back into the world.”

Arguing with Jamie Spears’ attorney, Montgomery’s lawyer, Laurieann Wright, urged the court to move forward with the best process for Spears, which would include maintaining her privacy and not bringing her to the stand to be cross-examined. “I don’t think it’s a secret that we’re dealing with someone with mental illness,” Wright said, stating that the star still has the right to privacy, citing HIPPA laws.

“She feels so strongly that she needs to be there for Ms. Spears,” Wright said of Montgomery, adding that the medical team has a “strong recommendation” to “remove her father.” Taking another jab at Jamie Spears, Montgomery’s attorney added, “Bottom line is that the conservators need to work together or else this isn’t going to work.”

After Spears’ first explosive court hearing, public interest in the case exploded around the world with Hollywood, fans and #FreeBritney supporters rallying behind the singer. The conservatorship has been subject of renewed interest, especially in recent months, ever since the New York Times-produced documentary, “Framing Britney Spears,” was released in February, putting a spotlight on the situation. On Tuesday, the documentary received two Emmy nominations.