Britney Spears Is Finally Free, but Her Battle for Justice Is Far From Over 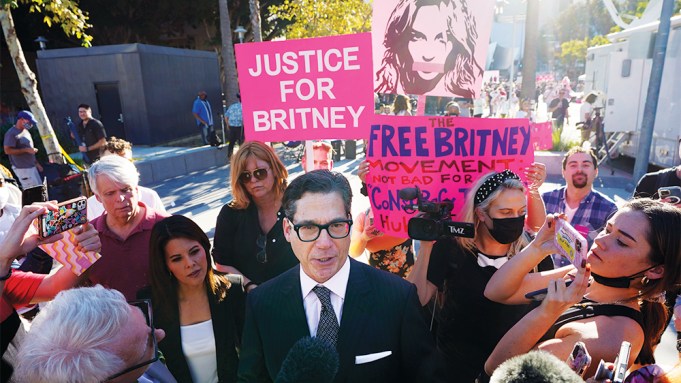 Britney Spears’ conservatorship is over — an outcome that just a few months ago seemed impossible for the pop star, whose personal life, work, finances and medical decisions have been controlled by the court-ordered guardianship for almost 14 years.

But a legal battle still lies ahead for the singer, who is putting up a fight against her father and her former management company, both for her hard-earned money and to seek justice for the abuse that she testified she endured.

Everything changed for Spears after she publicly addressed a court in Los Angeles on June 23, telling the judge that she was “traumatized” and held against her will, with all of her rights stripped away by her conservators, including her father, Jamie Spears. “I just want my life back,” the singer pleaded.

After that blistering testimony heard around the world, this past summer Spears was finally granted the ability to hire her own lawyer, former federal prosecutor Mathew Rosengart. That’s when the tables started to turn. In late September, Jamie Spears was suspended from the conservatorship, which was ultimately terminated on Nov. 12.

But now the star is facing a struggle with her father and the former business manager of her estate, Tri Star Sports & Entertainment Group, which was hired by Spears’ father and has been accused of running an intense surveillance apparatus that tracked the star’s communications and bugged her home.

Rosengart has publicly pledged to fully investigate the conduct of Spears’ father and Tri Star. After last Friday’s termination hearing, the attorney would not respond to questions on whether law enforcement is involved in any investigation.

Recent court documents reveal contentious communications between Rosengart and Tri Star, which argued there is no evidence of “extrinsic fraud” that would require Spears’ legal team to subpoena accounting documents. Rosengart, who has accused the company of “stonewalling” his attempts to obtain information for his client, says his firm was forced to issue two subpoenas because they would not voluntarily cooperate with Spears.

Outside the courthouse after the termination hearing, Rosengart said Tri Star has “refused to answer” the question of how much money it took from the estate. “Does TriStar treat all their clients this way, or is it just Britney Spears?” Rosengart asked during a press conference. “She has been bullied for a decade.”

Lawyers for Tri Star did not immediately respond to Variety’s request for comment.

Rosengart also continued his calls against Spears’ father, telling fans and reporters outside of court, “This conservatorship was corrupted by James P. Spears,” who, Rosengart stated, citing public records, has taken up to $4 million from his client’s estate. (Earlier in the case, Rosengart raised questions in a court document regarding whether the elder Spears had “dissipated” his client’s estimated $60 million fortune.)

Spears’ father has continuously denied all allegations of wrongdoing. His new attorney, Alex Weingarten, did not respond to Variety’s numerous requests for comments.

Before ridding Spears of the conservatorship altogether, Rosengart and his team methodically strategized to suspend her father so he would be unable to evade culpability. As a result, he is now required to turn over his files, including client-attorney communications.

But Rosengart said Spears’ father has “refused to cooperate” with his requests to appear for deposition under oath.

When contacted by Variety, Rosengart did not respond for comment any further regarding any investigation. But it appears the singer’s legal team is moving full steam ahead — in fact, Rosengart has beefed up his team with attorney Kyle Freeny, one of 19 prosecutors selected by Robert Mueller for his investigation into then-President Donald Trump.

And according to Spears’ own word, she is not interested in holding back.

“It still blows my mind every day I wake up how my family and the conservatorship were able to do what they did to me,” Spears said in an Instagram caption on Nov. 16. “It was demoralizing and degrading. I’m not even mentioning all the bad things they did to me which they should all be in jail for.” The pop star wrote she is used to “keeping peace” and “keeping my mouth shut.”

“But not this time,” Spears wrote.

Two more hearings are set for Dec. 8 and Jan. 19, which will deal with financial and accounting matters.

Legal experts have explained to Variety that the conservatorship saga is far from over. “I’d be shocked if this takes less than a year to clean this all up,” said attorney Sarah Wentz, a partner at the firm Fox Rothschild, who represents high-profile individuals and specializes in conservatorships, guardianships and estates, but has never worked with Spears and has no affiliation to the case.

While legal battles will persist, so much more is at stake than a multi-million dollar fortune. Spears, who celebrates her 40th birthday next month, is now free to embrace her own life, after having been controlled and silenced for most of her adult years.

“What am I going to do now that the conservatorship is over with?” Spears said in an Instagram video, speaking more freely than ever before in recent memory. “Well, let’s see, I have been in the conservatorship for 13 years. That’s a really long time to be in a situation you don’t want to be in.”

Speaking graciously with great conviction and showing a heightened awareness of the conservatorship system, Spears said she is “not here to be a victim,” and wants to be an advocate for others.

During Spears’ conservatorship, she was not allowed to drive a car and did not have access to her own money. Now, she can enjoy the day-to-day freedoms that most average Americans take for granted every day.

“I’m just grateful honestly for each day and being able to have the keys to my car and being able to be independent for a woman and owning an ATM card, seeing cash for the first time, being able to buy candles,” Spears said on Instagram. “It’s the little things for us women, but it makes a huge difference, and I’m grateful for that. It’s nice. It’s really nice.”

In court, Rosengart explained Spears has a “safety net” to ensure an “orderly transition” into the real world, which means she will continue to work with consultants who will look out for her financial and personal well-being.

Accountant John Zabel, who took over for Spears’ father when he was ousted, will have “limited and administrative power” to wind up his responsibilities in helping the star manage her estate.

Jodi Montgomery, who served as Spears’ temporary conservator, will also continue to work with the pop star. While a termination plan was filed under seal, an individual close to the case tells Variety that details are still being ironed out, but Montgomery has a positive relationship with the singer and will assist with any day-to-day personal needs, ranging from coordinating travel to doctor’s appointments. An attorney for Montgomery declined to comment.

Meanwhile, as one of the most successful recording artists in pop history, many are wondering about the star’s potential return to the stage.

“Whether Britney performs again will be up to Britney, at the right time,” Rosengart said in response to reporters at the courthouse.

The star has shared her desire to have another baby and marry her fiancé, actor Sam Asghari. And if the #FreeBritney movement’s long-standing support is any indication, her fans will wait for new music until whenever Spears may be ready.

“We support you, Britney, now and forever. That’s it,” Leanne Simmons, a fan and an activist who helped organize the Free Britney L.A. group, tells Variety. “We fought this fight to get her the ability to speak for herself and more importantly, to be free from the conservatorship. Now, it’s Britney’s world, and she can do whatever the hell she wants.”