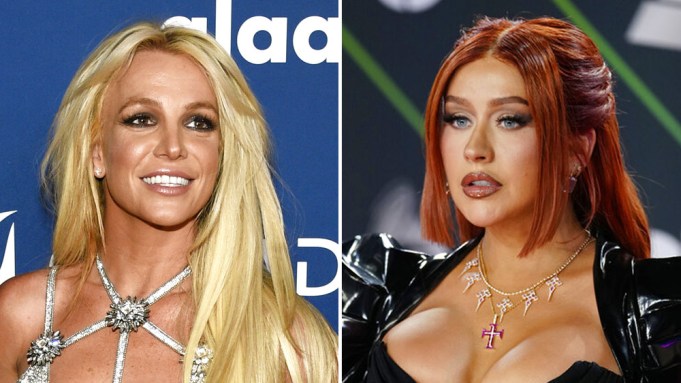 Britney Spears is free, and she certainly is not holding back any longer.

The Princess of Pop took to her Instagram Stories on Friday evening to post a video of fellow ’90s pop star, Christina Aguilera, who refused to answer a question about Spears during a recent interview.

The video is from the red carpet at Thursday’s Latin Grammy Awards, when Aguilera was asked by a reporter if she has been in communication with Spears following the termination of her 13-year conservatorship. Aguilera’s publicist then interjects the reporter’s question to pull Aguilera away, as he says, “No, we’re not doing that tonight. I’m sorry.”

Aguilera frowns, telling the reporters that she can’t answer the question before walking away from the press line and adding, “But I’m happy for her.”

Spears posted the video of Aguilera alongside the message: “I love and adore everyone who supported me… but refusing to speak when you know the truth, is equivalent to a lie !!!! 13 years being in a corrupt abusive system yet why is it such a hard topic for people to talk about ??? I’m the one who went through it !!!! All the supporters who spoke up and supported me, thank you… yes I do matter !!!!!”

Variety has reached out to Aguilera’s publicist, who is featured in the video. He did not immediately respond for comment.

Spears and Aguilera rose to fame together as child stars on Disney’s “The Mickey Mouse Club,” on which they co-starred from 1993-1994. As teenagers, they both catapulted to international superstardom at the same time, when female pop singers were rising in the age of ’90s boy bands, alongside Mandy Moore and Jessica Simpson. In 2003, they infamously performed at the MTV VMA’s with Madonna.

This past June, following Spears’ blistering testimony about the abuse she claims she endured during her conservatorship, Aguilera voiced her support for Spears, posted a childhood photo together and posting a statement, which said, in part, “These past few days I’ve been thinking about Britney and everything she is going through…It is unacceptable that any woman, or human, wanting to be in control of their own destiny might not be allowed to live as they wish.”

While Aguilera was dodging questions about Spears on Thursday night, Lady Gaga (who was at another red carpet event on Thursday, the Los Angeles premiere of her film “House of Gucci”), spoke at length about Spears when asked about her freedom by reporters.

Shortly after she posted about Aguilera on Friday night, Spears also posted about Gaga to thank her for her words.

“Thank you Lady Gaga for genuinely taking your time to say something so kind,” Spears wrote on her Instagram Stories. “You made me cry !!! I love you !!!”

In the Gaga interview, referenced by Spears, the Oscar-winning “Star Is Born” musician and actor said the way Spears was treated in the business was wrong. She also took a moment to comment on the negative treatment of women in the music business overall. “I think that she will forever be an inspiration to women,” Gaga said in the interview that was posted by Spears.

After Spears posted about Gaga, the “House of Gucci” star responded by posting a photo on her Instagram story, writing: “Love you @britneyspears. Live your best life. I prayed for the legal system to treat you like a person. You’ve now changed the course for women in this industry forever. You stood up for yourself and were so brave. Thank you.”

Last night, Lady Gaga spoke to Variety at the premiere of her Oscar-buzzy film. When asked about Spears, she said she would want to collaborate with her. “Of course I would!” Gaga exclaimed on the red carpet.

“Britney is, she’s a woman in this business that showed a lot of power in her sexuality, even in her youth, in a way that, I think for me as a young woman, was just so inspiring and empowering,” Lady Gaga told Variety last night. “And I’d like to say this, truly — we can all root for her, but the person who changed her life was her. So this change that’s happening for her, it happened because of her, I believe. I’m excited for her future and I wish her all the best.”

Lady Gaga shows support for Britney Spears and reveals her favorite Britney song: "She's a woman in this business that showed a lot of power in her sexuality, even in her youth, in a way that for me as a young woman was just so inspiring and empowering." https://t.co/S2fo5WyfKM pic.twitter.com/efAYYfhPNi

Spears’ conservatorship came to an end exactly one week ago when Los Angeles Superior Court Judge Brenda Penny terminated the court-ordered arrangement after nearly 14 years of a contentious, drawn-out legal battle. The pop star is represented by Hollywood power attorney and former federal prosecutor, Mathew Rosengart, who continues to fight for justice against her father, Jamie Spears, and the former manager of her estate, Tri Star Sports & Entertainment Group.

“It still blows my mind every day I wake up how my family and the conservatorship were able to do what they did to me,” Spears said on her Instagram on Nov. 16. “It was demoralizing and degrading.” Spears has profusely thanked the members of the #FreeBritney movement and said she is celebrating on “cloud 9” after the conservatorship was terminated.