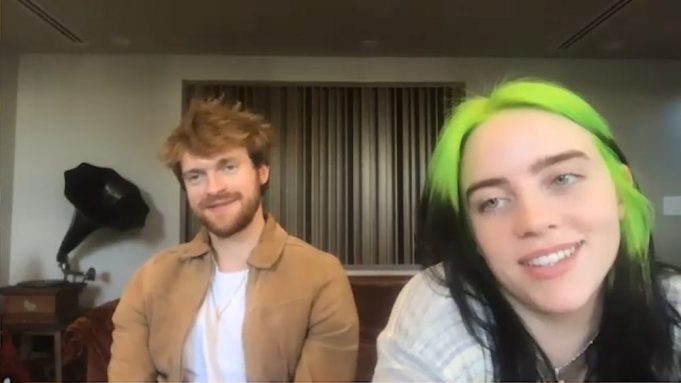 Billie Eilish made Grammy history again on Sunday by winning the visual-media song award for her James Bond movie theme “No Time to Die.”

It marked the first time in Grammy history that a song for a film not yet released has won. Traditionally the Grammy soundtrack committee disqualifies a song when voters cannot yet see the movie it was written for, but the 2020 pandemic dictated a modification to the usual rule.

Eilish, who won with her brother and co-writer Finneas O’Connell, released the song on Feb. 13, 2020, in anticipation of an April 2020 release of the film. Postponements to November, then to April 2021, and now to October 2021 were unforeseeable. And its chart success (debuting at No. 1 in England, reaching No. 4 on the Rolling Stone chart, No. 16 on the Billboard pop chart in the U.S.) clearly impacted the decision.

Ironically, the Grammys’ movie song category is usually behind the times, not ahead of them, as the win often goes to whatever song won the previous year’s Oscar. But this year that winner, Elton John and Bernie Taupin’s “(I’m Gonna) Love Me Again,” wasn’t even nominated for the Grammy, although its Oscar competition, songs from “Frozen II” and “Harriet,” were (as were a Brandi Carlile song from “Onward,” the only 2020 movie in the batch, and Taylor Swift’s contribution to the 2019 “Cats” movie).

Although James Bond has been an icon of cinema since 1962, this is only the fourth Grammy to win for its music. George Martin won an arranging award for Paul McCartney & Wings’ “Live and Let Die” theme in 1973, and “Skyfall” won in 2013 for both the Adele song and Thomas Newman’s score.

Accepting on Zoom, Eilish thanked score composer and producer Hans Zimmer, record producer Stephen Lipson, film producer Barbara Broccoli and Bond star Daniel Craig, adding “I can’t believe this is real, I couldn’t believe it was real then,” referring to getting the gig: she was the youngest songwriter ever to compose a theme for 007.

As expected, Icelandic composer Hildur Guðnadóttir won the score soundtrack Grammy for her music for “Joker,” following on her Oscar win for the 2019 movie chronicling the backstory of DC Comics’ most twisted villain. She thanked director Todd Phillips and “the film music community for their phenomenally warm welcome this last year.”

The surprise among the visual media categories was “Jojo Rabbit” winning for best compilation soundtrack. Taika Waititi, who was both album producer and director of the 2019 black comedy about a 10-year-old Hitler Youth member who discovers his mom is hiding a Jewish girl in their attic, reacted with laughter.

“Well, I guess they’re just giving Grammys to anyone now,” he said. “It was so long ago I can barely remember anything about making that movie.” The album was an eclectic collection of classical and pop pieces led off by a newly recorded German-language version of the Beatles’ “I Want to Hold Your Hand.”