Billie Eilish to Drop New Album, ‘Happier Than Ever,’ on July 30 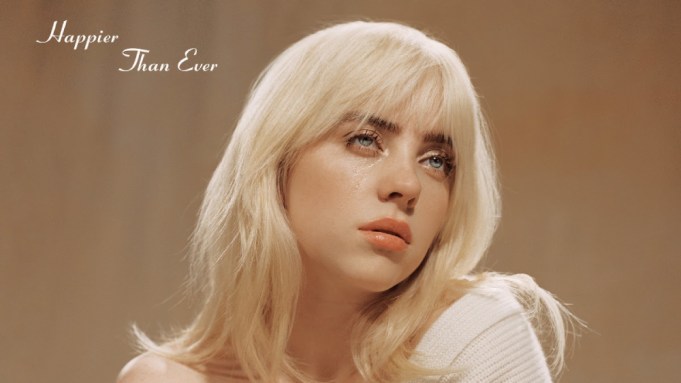 After dropping a brief video on Monday sporting her new blonde look, Billie Eilish has announced that she will release her second full-length album, titled “Happier Than Ever,” on July 30, and will drop a new song on Thursday morning.

“MY NEW ALBUM ‘Happier Than Ever’ OUT JULY 30TH!,” she wrote in a social media post. “This is my favorite thing i’ve ever created and i am so excited and nervous and EAGER for you to hear it. i can’t even tell you. i’ve never felt so much love for a project than i do for this one. hope you feel what i feel. alsoooo new song out thursday at 9am too!! AHHHHHHHHHHHHHHHHHHHHHH.”

Judging by titles of the songs from the album (listed below) and it’s clearly ironic title (she appears in tears on the cover), the lyrics continue the dark — at times playfully dark — vibe of her Grammy-sweeping 2019 debut full-length, “When We All Fall Asleep Where Do We Go?” It includes her two most recent singles, “My Future” and “Therefor I Am,” although not her recent collaboration with Rosalia. Like her debut, it was written and produced with her brother and musical collaborator, Finneas.

News of the album was teased earlier on billboards in several cities (see below).

Eilish told Stephen Colbert in February that she’d recorded a new album in lockdown, the result of her first prolonged period of not touring since her career began in earnest in 2016.

The album arrives more than two years after her debut, “When We All Fall Asleep, Where Do We Go?,” which swept the 2020 Grammy Awards, with her and/or brother/collaborator Finneas winning Album of the Year, Record and Song of the Year, Best New Artist and Best Producer.