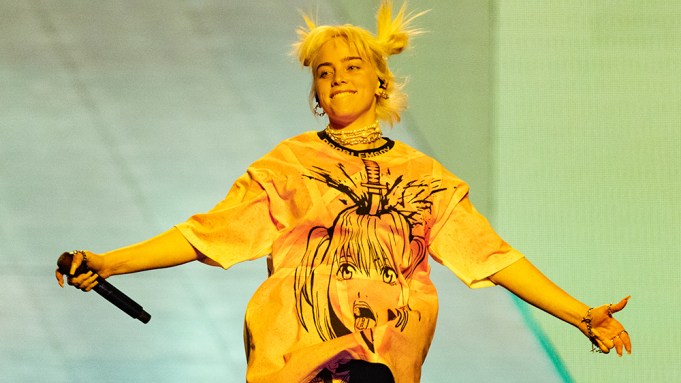 Amid strict COVID-19 protocols, the iHeartRadio Music Festival returned to Las Vegas’ T-Mobile Arena over the weekend. Acts including Dua Lipa, Finneas, Nelly and Weezer kicked off the concert showcase on Friday night, with Coldplay, Billie Eilish, Khalid and Sam Hunt among Saturday’s lineup. The Daytime Stage also returned with Olivia Rodrigo, The Kid LAROI, All Time Low, Yungblud and more. Variety was backstage with the stars as they dished on new music, returning to the stage following pandemic trials and discovering Billie Eilish. Here’s what we learned.

Khalid Has a New EP Coming

He recently announced taking some extra time to complete his forthcoming “Everything is Changing” due to feeling overwhelmed, but fans will still get new music from Khalid in the meantime. The 23-year-old musician told Variety he has an EP in the works.

“This album is super special to me. [It’s] a part of me, so I want to make sure I’m happy with everything before it comes out. But I do plan on releasing an EP soon,” he said. “It’s in the works and I can’t wait to get music out to the world.”

Khalid dropped his single “New Normal” at the Virgin Galactic Unity 22 launch in July, but took to Twitter in August to let fans know that finishing his album had become overwhelming and he needed to “find that joy again.” Despite such challenges, he said the pandemic has otherwise fed his creativity.

“It’s inspired me so much. Having time off for the first time in a long time was refreshing. I love being a musician and being an artist, but sometimes things can get overwhelming, so the fact I had time off to refocus has me even more excited about it.”

It’s All About Billie

Eilish was a hot topic backstage, with everyone from country crooner Sam Hunt to Khalid and 24KGold eager to catch the 19-year-old star’s opening set on Saturday.

Hunt recalled discovering the teen’s music years ago and being instantly wowed. “I stumbled across some songs on a playlist and was like, ‘Who’s this?’ so looked her up and listened and kept following her,” said Hunt, who performed his newest single “23” and told us he plans to release more songs by year’s end. “I love her voice and her songwriting. It’s so fun to hear an artist early in their career and watch the trajectory – and hers has been a skyrocket.”

Khalid, meanwhile, shared how proud he is of Eilish, with whom he collaborated on the 2018 track “lovely.”

“Billie is incredible — and Finneas, too,” he said. “Super nice, very endearing and always awesome. I’m more than happy to see the amount of success she’s achieved in such a small amount of time, but I know it took a lot of work. I’m proud of her, always.”

Having released his country-inspired album “Heartland” with songs featuring Kane Brown, Darius Rucker and Florida Georgia Line, Nelly confirmed he’s planning a follow-up featuring female country stars. While tight-lipped about who he might work with, he described his ongoing country ventures as an ode to fans in the genre who have supported him throughout his career.

“I’ve done a good job of being able to set my career up for this moment and be musically-free,” said the 46-year-old Texas native, who was joined on-stage by Florida Georgia Line for their collabs “Lil Bit” and “Cruise.” My fans have allowed me to do different things with my music and have success with them, so [country] is no different. … It’s truly something I feel is special and innovative and it’s giving back to the country world what they have given me since I [started] my career and that’s a lot of love.”

“This is more important,” Nielsen replied.

Snapping a selfie with the pair, Nielsen enthused, “Hell yes!” when we asked if he’s a fan of the sisters.

Maddie then complimented the musician on his jacket before he gifted the ladies guitar picks and went on his way to prepare for Cheap Trick’s Friday night set.

“We’re lucky to be out here playing after all the years we’ve been together [and] lucky to have our kids in the band helping us out,” Nielsen said of being able to perform again. “We couldn’t ask for anything more.”

After accepting the Titanium Award for reaching one billion total audience spins in 2021 with his breakout hit “Mood,” 24kGoldn shared his hopes to inspire others with his success.

“This is this first award I’ve gotten since high school service awards or something, so it feels good to be recognized for all the work that me and my friends put into it,” he said. “I hope somebody else sees this – who looks like me or is any of the things that I mentioned – and says, ‘If he could do it, I can do it.’ And that it inspires and motivates them to do whatever it is they’re interested in.”

The 20-year-old rapper believes authenticity and disregarding genre boundaries made the track, which features iann dior, universally-appealing. “You can’t put it a box because is it a pop song? Is it a rock song? Is it a rap song? I don’t even know. It traversed all these different boundaries [and] I think that’s why people like it. It doesn’t alienate anybody.”

“This Is Us” star Chrissy Metz tried to stop the tears flowing as she reflected on wrapping up her Golden Globe-winning journey portraying Kate Pearson in NBC’s “This Is Us.”

“It’s [changed my life] in every single way,” said the 40-year-old actress. “I just have a lot of gratitude. Don’t get my crying! I get to watch a masterclass every day when I go to work and learn so much from all these incredible actors. And, I get to portray a woman who so many other people see themselves in, so it’s just awesome.”

Metz is currently filming the sixth and final season of the show, which she teased will be a rocky road. “There’s eventually going to be some closure and some beautiful contentment, but on the way to that journey, it’s going to be very bumpy.”

“We’ll probably get up to some naughty shit tonight,” the 24-year-old musician and actor laughed on Saturday, after performing on the Daytime Stage. “Lewis is in Vegas too and he’s a good mate of mine. Watch out, Vegas!”

The Brit added that hitting the stage at the 2021 iHeartRadio Music Festival was a moment he’d waited two years for and one he’ll never take for granted following the trials of the pandemic. “I’m not the person to sit quietly in his bedroom and twiddle his thumbs,” he said. “This business we call rock ’n’ roll is what I live and breathe for, so today was sick. I loved it.”

“I did a lot of writing [while stuck at home] and we did a remote TV show from my house, but apart from that it was upsetting,” he added. “It was boring. Now we’re back, I’m like a simmering pan — I ain’t gonna come off the road until 2024 and I am fucking here for it.”

He was temporarily paralyzed and had to learn to walk again, but there was no sign of physical trauma as Donny Osmond rocked out to Nelly’s set alongside TikTok musician Jon Dretto on Friday night. The 63-year-old musician suffered debilitating complications following back and neck surgery in 2019 then wondered whether he would ever walk, let alone dance, again.

“I was on a walker a year-and-a-half ago, but it didn’t stop me baby — I’m back on stage dancing up a storm,” said Osmond, who just days earlier kicked off his solo residency “Donny” at Harrah’s Las Vegas. “It’s scary there for a while when you can’t walk and in 18 months, you’re expected to dance like crazy. I did it, but it took a lot of work – and I was recording my 65th album at the same time.”

“It’s unbelievable,” he added about getting back on stage for his residency. “It’s the biggest solo show I’ve ever put together and we just got extended all through 2022, so we’re excited.”

Debbie Gibson Was Joey McIntyre’s “Lifeline” During the Pandemic

Debbie Gibson and Joey McIntyre stepped straight off stage from their limited engagement at The Venetian Resort’s Sands Showroom to head over to T-Mobile Arena, where New Kids on the Block member McIntrye shared that working on shows with Gibson had kept him going through the past year.

The pair — who also released a version of Gibson’s 1989 hit “Lost In Your Eyes” together — wrapped up the Las Vegas show with Celine Dion, Elton John and Dua Lipa covers on Sunday night.

“Over the pandemic, she was a lifeline for me to stay busy, do what I love to do and have something to look forward to,” McIntrye said. “We’re finally here and it’s been great.”

Gibson, 51, meanwhile released “The Body Remembers,” her first new original pop album in 20 years, in August. “It feels so profound because people are really craving music, escape and connection right now and I’m very present for this experience,” she said about the record. “In the earlier years, everything was like a drive-by, moving too quick. It was a whirlwind, so really taking in this moment has been amazing.”