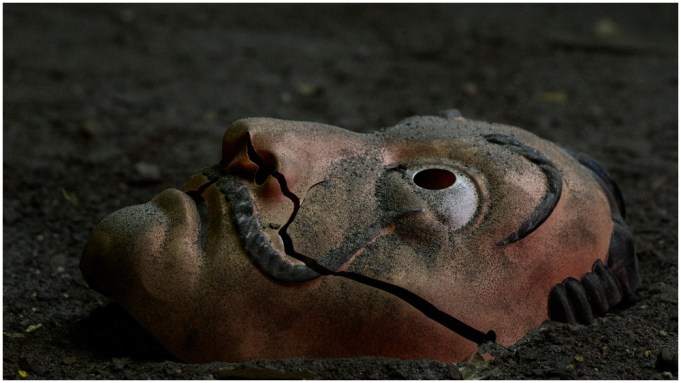 After a cameo at Wednesday night’s “La Casa de Papel: El Legado” global fan event streamed from Madrid, Becky G has dropped the full-length video of her reggaeton cover of “Bella Ciao,” an Italian anti-fascist protest song co-opted by the “Money Heist” gang as a resistance anthem of their own.

“I have always loved ‘La Casa de Papel’ (Money Heist) and the way this show connected with millions of people across the world,” said the singer in a statement released with the video. “‘Bella Ciao’ is an iconic song and marks an important moment in the series, so being asked to reimagine it and be a part of the ‘Casa de Papel’ world is truly an honor. From recording the song to shooting the video, I hope everyone enjoys this cover as much as I do!”

The video release comes just ahead of Netflix’s launch of the final five episodes of “La Casa de Papel” on Dec. 3. Netflix stressed, just before “Squid Games” was launched worldwide, that the series was its most-watched non-English-language drama until that point and had been seen by 180 million households worldwide.

The BFI and Disability Screen Advisory Group have launched the second iteration of their Press Rest digital campaign against ableism, on the eve of International Day of Disability. Press Reset comes with an urgent call to the screen industries to change how they engage with disabled talent on both sides of the camera. The BFI also announced the new Disability and Visible Difference Representation Panel to provide guidance to its BFI Audience Fund and ensure that it only supports the distribution of films which accurately and fairly portray disability and visible difference.

In a video, Press Reset offers up practical ways in which decision makers in film and TV can recognize, tackle and prevent ableism, including: responsible recruitment; engaging with the disabled community; setting targets; equal pay; thinking about access; and being an ally.

China’s internet regulator said Thursday that it has fined the influential culture and review social media company Douban for the “unlawful release of information,” as authorities ramp up efforts to tame the “chaotic” entertainment sector. The Cyberspace Administration of China (CAC) said in a statement that it had fined Beijing Douwang Technology, which operates the platform, $235,000 (RMB1.5 million) and demanded “immediate rectifications” from the company. The platform is a site where users share film, TV and book reviews and discuss social issues, and is comparable to IMDB.com. Its discussion functions have been suspended through Dec. 17. Online platforms should improve their mechanisms for “public information inspection” and censorship so as to “strengthen the management of information released by users and avoid providing a platform for illegal information,” the CAC said. From January to November, Beijing authorities have issued 20 fines against douban.com totaling $1.4 million (RMB9 million). The regulator did not provide further details about the specifics of Douban’s content violations. In August, Beijing Douwang was fined $62,000 for “publishing and disseminating online publications that promote obscenity, pornography, gambling, violence, or abetting crimes” between the period of August 2011 and July 2021, according to public records. – Rebecca Davis

BritBox U.K. will be the exclusive home for six-part espionage thriller “Spy City,” produced by Leonine Studios’ Odeon Fiction and Miramax TV. The series, which stars “Preacher” lead Dominic Cooper, will launch on the service Dec. 23. In the show, Cooper plays secret agent Fielding Scott, sent to Berlin in 1961, at the height of the Cold War. There, he is tasked by a clandestine division of the Secret Intelligence Service of Great Britain to discover why and how classified security information is being leaked. Series co-producers include ZDF, Seven Stories and Wilma Film, in association with Magenta TV and funding from FFF Bayern, Normedia, German Motion Picture Fund, Czech Film Fund and co-financed and executive produced by Miramax. ViacomCBS Global Distribution Group is handling global sales.

NBCUniversal’s all-reality on-demand streaming service Hayu has launched in India, direct-to-consumer on a range of devices including mobiles, tablets, computers, TVs and consoles. India becomes the 28th country to gain access to the streamer which hosts more than 8,000 episodes of reality TV shows from around the world, including hits such as “Keeping up With the Kardashians,” “The Real Housewives,” “Top Chef” and others. In India, interested customers will have the option of a three-month subscription for around $4.65 or one year prepaid plan for roughly $13.30.

Stephen Greenhorn, the award-winning writer behind “Sunshine on Leith,” has been lined up to adapt James Goodhand’s debut novel “Last Lesson” for Red Planet Pictures, which recently acquired international TV rights to the book. Published in 2020, the book quickly went viral, earning praise for its treatment of current themes including toxic masculinity, social alienation and mental health. A thriller, the book unspools during and after the psychological breakdown of a model student after his involvement in a terrible accident. “Last Lesson” the latest literary acquisition from Red Planet, which is establishing itself as a leader in book-to-screen adaptations, having recently finished shooting “Our House,” adapted from Louise Candlish’s bestseller by screenwriter Simon Ashdown for ITV. The company is also currently developing adaptations of Megan Hunter‘s “The Harpy” and New York Times best-selling author Antony Johnston’s “The Exphoria Code.”

Veteran film executive Esther Yeung has been appointed as COO of We Pictures, the production, distribution and sales company founded by filmmaker Peter Chan Ho-sun. Until recently, Yeung was GM, head of sales and distribution at Bill Kong’s Edko Films. Before that she was director of Asian acquisitions, sales and marketing at the Hong Kong- and Amsterdam based sales outfit Fortissimo Films. We Pictures is seeking to expand its production slate while also broadening its business of content creation, IP development and distribution. “I admire and appreciate her persistence and resilience when we worked together. And I especially value the relationships she built with filmmakers across the region,” said Chan in a statement.

Marcus/Glass Productions has closed a deal to send the global hit format “Let’s Make a Deal” to Can’t Stop Media, which will distribute the gameshow exclusively worldwide excluding the U.S., Germany and Canada. Rights to the show were acquired by Marcus/Glass earlier this year in a deal for the entire catalog of Hatos-Hall Productions’ gameshows. In November, a local rebooted version was launched by ProSeiban1 in Germany, pulling strong ratings. The original U.S. version plays on Rodgers Broadcasting Stations in Canada.