Angela “Angie” Kukawski, a Los Angeles-based business manager who worked at Boulevard Management in Woodland Hills, has died, the Ventura County Coroner’s office confirmed to Variety. She was 55, and the cause of death appears to be homicide, according to sources who point to an incident on Dec. 22 in Van Nuys and in Simi Valley, Calif.

Los Angeles police have arrested a 49-year-old man, identified as Jason Barker, who was being held on a $2 million bond, according to an L.A. County inmate intake filing. On Dec. 29, bail was raised to $3.07 million. He’s scheduled to appear in court on Jan. 12, 2022.

Kukawski, also known as Angela Castro, was a mother of five and, according to friends, was “beloved” in the industry. She is described as “hard-working” and “a straight shooter” by one music business associate who had liaised with her. Boulevard, where she was employed most recently, specializes in accounting and financial management services for entertainers, athletes and entrepreneurs and advises on asset management, tax preparation, insurance, and estate and retirement planning, among other offerings.

At Boulevard, Kukawski worked with such clients as Nicki Minaj, rappers Kanye West and Offset and, for a time, the Kardashians, as well as the estate of Tupac Shakur, according to government filings and past associates.

“We are saddened and heartbroken by the loss of our colleague, Angie Kukawski,” Boulevard’s Todd Bozick said in a statement to Variety. “Angie was a kind, wonderful person, and she will be greatly missed by all who knew her. Our deepest condolences go out to all of Angie’s family and friends.”

Little else is currently known about the circumstances of the crime but it is believed that Barker was Kukawski’s boyfriend.

Update: A press release issued by the LAPD on Dec. 29 details that Barker allegedly killed Kukawski inside their shared home in Sherman Oaks then “placed her inside her vehicle” and drove to Simi Valley, where the car and the victim’s body was discovered on the 1500 block of Patricia Ave.

A report in the Los Angeles Times adds that Barker has been charged by the LA County DA with two felonies: one count of premeditated murder and one count of torture, per a criminal complaint obtained by the paper. Also noted is Kukawski’s cause of death from “sharp and blunt force injuries of the head and neck, as well as strangulation.” Variety has confirmed the manner of Kukawski’s death with the Ventura County Medical Examiner.

The Times reports that a knife and firearm were used in the attack.

In a statement to Variety, the Kardashian-Jenner family said: “Angela was truly the best. She cared about everyone of us and made things happen that were impossible. She will be greatly missed and we send our sincere condolences to her family and loved ones during this most difficult time.”

In an Instagram story posted the afternoon of Dec. 29, Nicki Minaj wrote: “Hardest working, most reliable, sweetest person you could ever know. You didn’t deserve this, Angela. My heart is breaking for your children. Rest In Peace.” 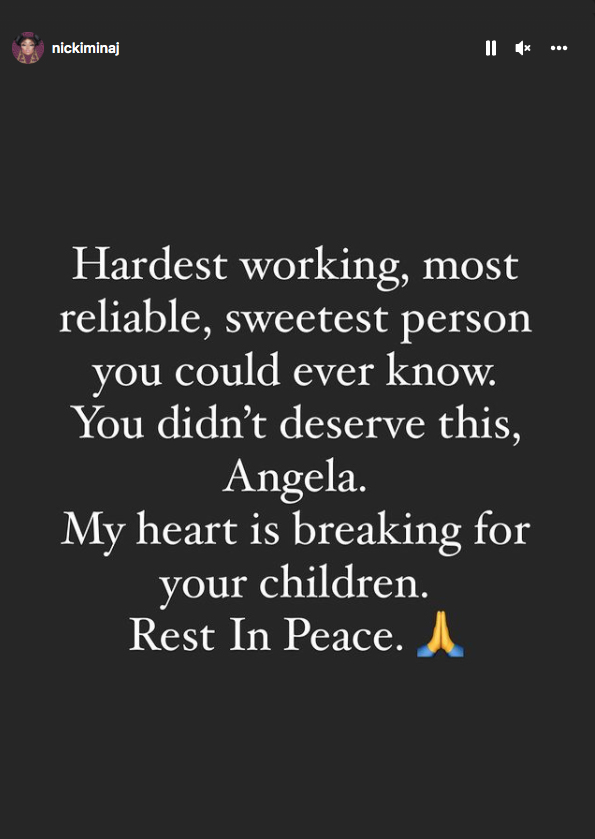 On Dec. 30, Offset, of rap trio Migos, also shared his condolences on Instagram, noting that he and Kukawski spoke every week. “Such a sweetheart,” he wrote. “Prayer to your soul.”