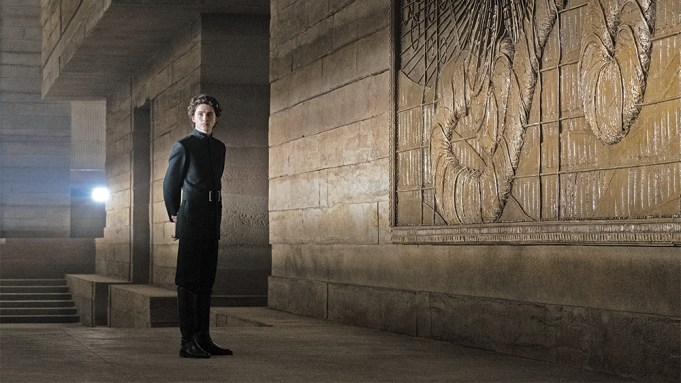 “Dune,” Denis Villeneuve’s sci-fi film of epic proportions, opened solidly in China on Friday and is forecast to attain a gross box office of $35 million (RMB224 million) in the country.

The forecast was made by Maoyan, one of China’s leading online ticketing agencies, which also reported that the film had grossed RMB23.8 million ($3.7 million) by 2pm Friday local time.

The $3.7 million haul was only good enough for second place, behind “The Battle at Lake Changjin” a war film that is poised to become one of the highest-grossing films of all time in China. In 23 days of release, “Changjin” has earned $798 million (RMB5.11 billion).

The early scores, however, are closely matched. At 2pm, “Dune” had achieved a 40% share of Friday’s nationwide box office, trailing the 45% for “Changjin.”

Forecasts are based on a combination of ticket sales for current screening sessions, ticket pre-sales and perceived public interest based on social media activity. Such early forecasts are subject to significant revision, either up or down, in subsequent days.

“Dune” has the advantage of being produced by Legendary Entertainment, which is owned by China’s Wanda. That has given it access to the largest circuit of cinemas in the country and, unlike most Hollywood releases, time to build awareness.

But industry sources and commentators have long been lukewarm on the prospects for “Dune,” deeming it too highbrow for a large part of the Chinese audience and lacking stars that have significant following in the Middle Kingdom.

On Douban, a film-centric social media platform, viewers gave “Dune” a rating of 7.5 out of ten, though it was unclear how many could have really seen the film at this early stage.

Viewer ratings are also currently less reliable than usual, and some sites appear to have suspended them, possibly in order to avoid throwing shade on the propaganda films that were released for the October 1 National Day holiday. Douban users appear to have credited “Changjin” with a 9.5 out of ten score.