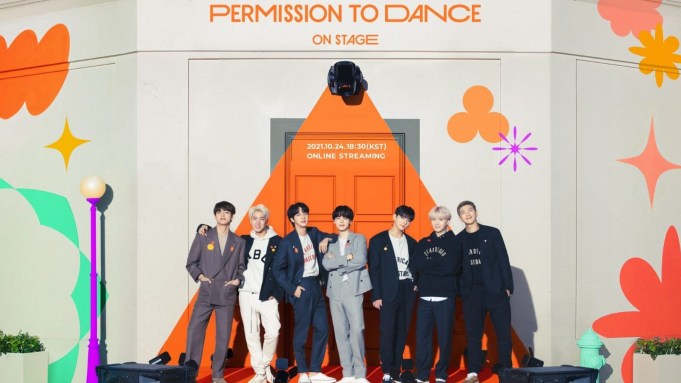 K-pop sensation BTS has teased a planned return to concert performances, albeit a virtual one.

The band announced Wednesday that it will live-stream concert ‘BTS Permission To Dance On Stage’ on Oct. 24. It will be carried exclusively on Weverse, the social media platform operated by BTS’s management firm Hybe Entertainment.

Few other details were unveiled, though a poster presented as part of the announcement and decorated with the colors of CD single “Butter” that contains their latest song “Permission to Dance,” indicates the timing of the concert as 6:30 p.m. Korean time on October 24. That equates to 2.30 a.m. for West Coast U.S. and 5.30 a.m. for fans on the East Coast.

The band said it will make further announcements.

The show will marks the band’s first concert in about a year since ‘BTS Map of The Soul ON:E” held in October 2020. That show, which was viewed across 191 countries and regions, incorporated cutting edge technologies such as AR, XR that enabled BTS to interact with the fans through the “ARMY on Air” fan event.

Due to the difficulties of putting on a multi-stadium tour during a pandemic, the band initially postponed the real world “BTS Map of the Soul Tour” which was to have started in April 2020. They later gave in to the inevitable and canceled in person performances.

The band – whose name is an acronym of Bangtan Sonyeondan or ‘Beyond the Scene’ – has mobilized millions of fans across the world into a powerful force (nicknamed ARMY). It has collected five No.1 Billboard Hot 100 singles in less than a year, and performed multiple sold-out stadium shows across the world. They were also named Time Magazine’s ‘Entertainer of the Year’ in 2020. BTS was nominated for best pop duo/group performance at the 63rd Grammy Awards and has been recognized with numerous prestigious awards including the Billboard Music Awards, American Music Awards and the MTV Video Music Awards.