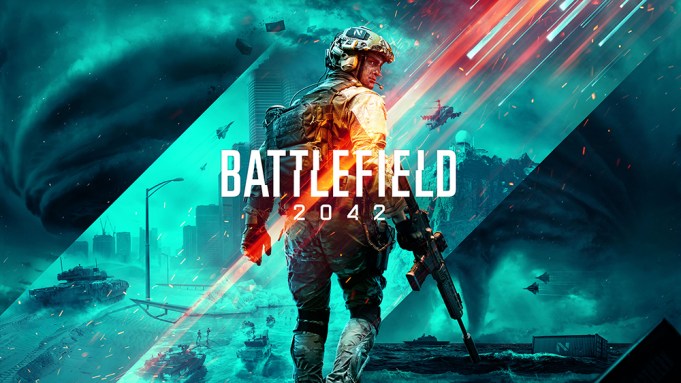 On Wednesday, EA Dice unveiled the first details for the sixth game in the “Battlefield” franchise, including its name: “Battlefield 2042.”

The multi-player first-person shooter will be released for Xbox One, Xbox Series X/S, PlayStation 4, PlayStation 5 and PC on Oct. 22. The new installment will widen the map for “Battlefield’s” largest matches ever, with matches filled with up to 128 players on the new-generation consoles and PCs (Xbox One and PS4 players, however, will be capped at 64 players and reduced map sizes).

As the title suggests, “Battlefield 2042” will take place a couple of decades in the future, after shortages of food, energy and clean water have led to dozens of failed nations, leading to the greatest refugee crisis in human history.

“Among these Non-Patriated, or No-Pats, are families, farmers, engineers – and even soldiers,” the synopsis reads. “Amidst this crisis, the United States and Russia draw the world into an all-out war. No-Pat Specialists join both sides, not fighting for a flag, but for the future of the Non-Patriated in this new world.”

Players will step into the roles of Specialists, a new type of playable character for the franchise that was inspired by the traditional four “Battlefield” classes. Specialists will have their own unique trait and specialty, with full customizable loadouts and access to their own arsenal of weapons, equipment and vehicles. “Battlefield 2042” will launch with 10 Specialists, with the first four announced on Wednesday: Wikus “Casper” Van Daele (recon), Webster Mackay (assault), Maria Flack (support) and Pyotr “Boris” Guskovsky (engineer).

“’Battlefield 2042′ is an evolution of the franchise and embraces what our players want – the ultimate ‘Battlefield’ multiplayer sandbox with intense combat and a ton of incredible, unexpected events,” said Oskar Gabrielson, general manager of Dice, in a statement. “All of us across DICE in Stockholm, DICE LA, Criterion and EA Gothenburg have had so much fun developing this game and now it’s time to let players jump in. What they’ll find is that we’ve built three distinct, absolutely epic experiences that we think they’ll love.”

“Battlefield 2042” will feature three distinct game modes, with two announced on Wednesday. The first, All-Out Warfare, is the next generation of the Conquest and Breakthrough modes, featuring the largest maps ever in the franchise and matches with up to 128 players. The maps will also be filled with dynamic weather, dangerous environment hazards and world events.

The second mode, Hazard Zone, is a squad-based game-type, a multiplayer experience that is “distinctly Dice but very different from All-Out Warfare’s Conquest or Breakthrough modes,” according to the announcement, and is not a battle royale mode. The third will be revealed during EA Play Live on July 22, while the first gameplay trailer will be released during Microsoft’s EA showcase on Sunday.

“Battlefield 2042” will have a Battle Pass for each season that will include both free and premium tiers. In the first year, there will be four seasons with four Battle Passes, four new Specialists and new locations, along with other new content. EA clarified that new locations introduced during season content post-launch will not be locked behind a Battle Pass and will be accessible to all players.