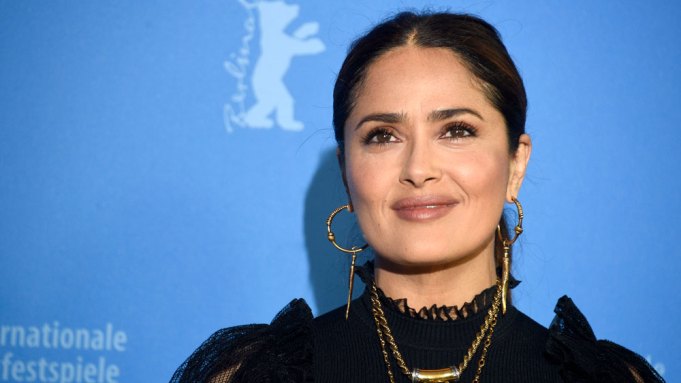 Salma Hayek stars in the new indie “Bliss” as a mysterious homeless woman named Isabel who befriends a man (Owen Wilson) who has just lost his job. Written and directed by Mike Cahill (“Another Earth” and “I Origins”), nothings nothing is as clear as it may seem in the film. Isabel is not only a drug addict, but she believes she’s living in one world while another version of herself, a scientist, lives in the much better “bliss world.”

“I was a fan of Mike’s work,” Hayek says on this week’s episode of the new Variety podcast “Just for Variety.” “I got a call from my agent who said, ‘Mike Cahill has a film and he wants you for the lead.’ And I go, “I love him.” They said, “He’s the director that did this and that movie.’ I said, ‘I know who he is. Are you kidding me?’ I got on the phone with him, and he had Mexican passion. I know he’s not Mexican, but he was so passionate.”

Hayek will make her debut in the Marvel Cinematic Universe in “Eternals,” “Nomadland” helmer Chloé Zhao’s feature about immortal aliens secretly living on earth. The 54-year-old actor plays Ajak, leader of the super-powered race. “My agents were like, ‘A Marvel franchise!’” Hayek recalls. “I’m like, ‘Oh, my God. I’m working with Chloé!’ and so I was starstruck when she was talking to me on Zoom. That was very exciting.’”

What is “Bliss” about?

The audience kind of can decide which movie to see. There’s two versions of it. It’s not an abstract film. There’s a beginning, middle and an end. It works both ways. They can choose to see a movie that it’s about two people struggling with addiction, and you’re seeing using substance to escape a reality. Or they can choose to see a sci-fi movie that talks about a “bliss world,” where I play a scientist that creates an ugly world so that some of us can go into this simulation and experience this world, so we can appreciate the bliss world because by now everybody takes it for granted and they’re used to it.

How much did you know about addiction before playing Isabel?

I’ve lost some close friends to addiction, but I still did my research with Mike. We created a whole background for her that it’s not in the movie. I mean, I came from a family where I was the first one to go to college, but then I messed up. [Mike Cahill] and I really spent a lot of time together. A lot of time on the phone. He came to London to see me. I saw him in L.A. And then Owen comes along. Completely different way of approaching things. Very relaxed. This is my favorite thing. We get him to come to rehearse in my house and he arrives, “Hello. Do you have any food? I didn’t eat. I’m hungry.” I said, “Oh, I’ll make you something.” I start cooking. Meanwhile, Mike and I are talking, talking, talking, talking, talking, and he’s like, “Mmm, okay. Oh, yeah.” He’s watching me. And he goes, “Oh, I see how you’re going to do this part. Great.” When he finished eating the second serving, we said, “Okay, let’s do the scenes. Let’s rehearse this scene.” And he goes, “Nah, I got it. I’m going to go now.” And it’s like, “No, buddy. We haven’t rehearsed.” He’s like, “No, no. I’m good. I got it. I don’t like to overdo it.” He left.

How unsettling is that?

It was unsettling until he got on the set. We really had a lot of fun together.

Nothing. I didn’t know anything about it. I’m very lucky. I have a Mexican friend and she’s a female, who’s the biggest Marvel geek that you can imagine. My problem was, I was sworn to secrecy because I was one of the first people that they hired, but I had to keep it in a secret for a long, long time. So, when I had the call, I said to them, “I confess. Eventually I will know everything that there is to know, but what are the Eternals? Do they exist in comics? I don’t know who’s Ajak.’” And then they explained everything to me. They explained me the script. They didn’t give me the script. I had to sign the contract without reading the script. They wouldn’t let me see the script until I signed. That was very unsettling.

What happens if you didn’t like the script? Did you have an out?

I was scared. But it doesn’t matter because I’m going to tell you why I didn’t care. I love the director. She’s brilliant. And then I like that [Ajax] is kind of the leader. She’s the only one that can talk to the Celestials. And I said, “I’ll get to be bossy on this one, too. I can play that.” Giving instructions, telling people what to do, I can do that. Then I was afraid of the outfit. I’m claustrophobic. I was very afraid that I was going to feel like I couldn’t move. It has a completely different DNA from the [other Marvel movies]. It’s shot different than all the other ones. It’s in real locations and they found some crazy extraterrestrial-looking locations. I don’t know if I’m allowed to talk about what they do with the camera, but…it’s not mostly done in post. The cinematography is incredible.

What was it like seeing yourself as Ajak for the first time when you looked in the mirror?

It was empowering. It really moved me. …They told me [early in Hayek’s career], “It’s never going to happen for you here.” I am representing. It’s not because I’m putting on an outfit but we get the right to be superheroes today. I’m also 54. So there was something really moving, not just for me, but for everything, all the different stereotypes. She’s not sexy. You know what I’m saying? She’s not sexy at all. I’m very short. I’ve been bullied for being short my entire life. And suddenly, it doesn’t matter. You’re a superhero in the Marvel universe. It moved me.

It’s an important step. There are going to be brown little boys and girls who are going to look up at that screen and say, “I could be a superhero.”

And short, middle-aged women, of every color! Yes. It’s even a larger category. Also this year, I have “The Hitman’s Wife’s Bodyguard.” In the first one, I had four scenes and now I’m the lead. I’m the action lead with Sam Jackson and Ryan Reynolds. I mean, not bad for an old lady.

What was the craziest stunt you did?

Oh, my God. We had so much. You have to bear with me because remember we shot this like a year ago. I do some cool stuff with the wires and things in “Eternals.” I have a great fight in “Hitman’s Wife’s Bodyguard.” I take out four or five guys. And it’s just like combat. It’s just like street fighting. It’s kind of like a long one.

I have to get your thoughts about Donald Trump no longer in the White House. How are you feeling?

I feel relief. Relief and not relief. I didn’t think he would have made a great president, but when he won, I caught myself thinking, “They’ll see…” And then I said, “Stop right there.” He’s the president of the United States. And for the good of everybody in the United States, I will give the benefit of the doubt, but for real and respect this man. I have to wish that he does a good job because I caught myself being cynical. But I don’t think he did a good job because he lied a lot. He lied a lot and he got away with a lot. And the coronavirus situation, it’s really bad. I did give the benefit of the doubt. But, I’m sorry. when the president of the United States, when people are dying, says, “Drink the disinfectant to cure yourself,” I said, “This is not something that anybody can justify in any way.” The fact that he says things that he doesn’t fact check before he says them. That’s a lack of respect in many ways. I don’t think he did a good job. And therefore, I am glad that he’s no longer our president, but I don’t feel relieved. I am worried because I don’t like our country to be separated. And this is why it’s important to … not to judge and respect, but at the same time, demand respect. It’s a very complicated situation, and it gives me anguish because I don’t want to win. Nobody wins if we don’t somehow work together. To me, that’s not a win. The win is that we have to work together and this gives me anguish.

This interview has been edited and condensed for clarity. You can listen to the full interview with Hayek above. You can also find “Just for Variety” on Apple Podcasts or wherever you listen to your favorite podcasts.