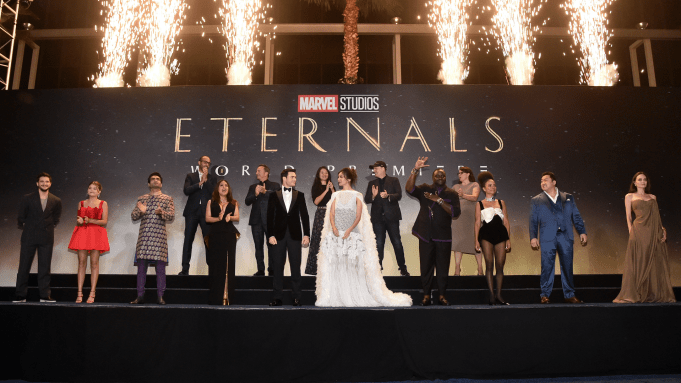 Kumail Nanjiani did something most people would never think of — he turned down a party invitation from Angelina Jolie.

And not just any party.

Jolie hosted a Halloween bash while they were filming “Eternals” in the Canary Islands. “I did get an invite but I actually didn’t go because we were shooting on location and I finished a couple of days before them, and [my wife] Emily [V. Gordon] was back in London so I decided to fly back and be with her instead of going to this amazing costume party,” Nanjiani explains.

Ahead of the film’s release, the “Eternals” stars who did go to the party shared some details with Variety.

“It was a pre-COVID celebration,” Lia McHugh said. “It was really fun.”

Gemma Chan went as Uma Thurman’s Pulp Fiction character and Richard Madden dressed as a skeleton. “I was dressed as an angel,” McHugh said.

In other “Eternals” party news, Salma Hayek hosted cast and crew for a holiday get-together. She and Jolie also partnered up and arranged for an on-set artisans bazaar so everyone could do some Christmas shopping. “We were so busy nobody could go shopping so we got local artists to bring their things and sell homemade things and handmade things,” Hayek said, adding, “It was so lovely. They were there the whole day.”

“Just for Variety” can be found at Apple podcasts or wherever you listen to your favorite podcasts. You can also watch more of the interviews in the video above.