Zendaya Goes Deep on the Making of ‘Malcolm & Marie’ 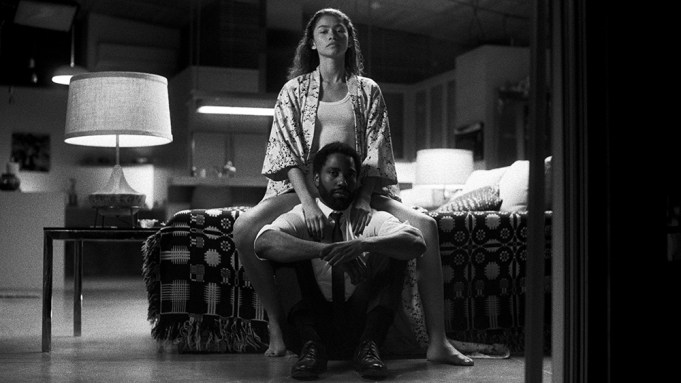 It was lucky for the filmmakers behind the self-financed “Malcolm & Marie” that they didn’t have a studio behind them, said Zendaya, the movie’s star and producer, because it took them two days of shooting to figure out what they were doing. After they had shot — and thrown out — “two days of unusable footage,” Zendaya said, its writer-director-producer Sam Levinson told her that if they were filming a big-budget movie, “we would have been fired.”

Instead, they made “Malcolm & Marie” — a black-and-white drama set over the course of one long night, starring Zendaya and John David Washington — on spec, and ended up selling it to Netflix for $30 million. And because of the unusual way they financed the movie, Zendaya said, it wasn’t only the producers who benefited from that sale: “It was really special for us, because we were able to offer our key crew members points on the movie.”

“It just felt like the right thing to do,” Zendaya continued. “These are the people that are laying all the tracks and were with us through the whole thing — and literally putting their blood, sweat and tears into it.”

During Zendaya’s conversation with Carey Mulligan for Variety’s Actors on Actors series, presented by Amazon Studios, they talked about their creative passions for “Malcolm & Marie,” “Euphoria” (also created by Levinson) and Mulligan’s “Promising Young Woman.”

They also delved into how “Malcolm & Marie” came together, and became one of the first movies to film after production came to a halt because of the coronavirus pandemic. The film shot in Carmel, Calif., in June and July, under COVID-19 protocols that at that time had not yet been agreed upon by studios or the unions — according to Zendaya, the film’s producers created their own.

“Our producers really did the hard work of consulting with different medical professionals and making sure that we had a very, very strict protocol,” she said. “Because if we were going to do this, the No. 1 thing is that people were safe. And so we kind of created a bubble, essentially.”

That part was easy to do, because they were filming at a compound in Carmel, which doubled as the couple’s house in which they argue and find their way back to one another. “We brought everything we needed, and we stayed there,” Zendaya said.

When Mulligan pointed out that “Malcolm & Marie” feels like theater because of its long takes, Zendaya agreed. She said her love of acting “came from the stage because my mom worked at the California Shakespeare Theater when I was a kid.”

“I think it’s always like an actor’s dream kind of a little bit to do something like a play,” she added.

As they filmed, she and Washington worked together to find their characters’ relationship: “What they’ve been through together, and what they mean to each other,” Zendaya said.

When Season 2 of “Euphoria” was shut down before filming even started in the spring, Zendaya and Levinson put their heads together to create something else. “I had this thought of like, ‘Could we just do something in my house?’” Zendaya remembered. As they discussed different ideas, Levinson called her one day and said, “‘Yo, Z, I got a good one’  — and he starts telling me this concept.”

The shoot was only 14 days start to finish, Zendaya said. “There were tough days, and it was exhausting,” she said. “But here was so much family around us, it felt like. We created this set family of support.”