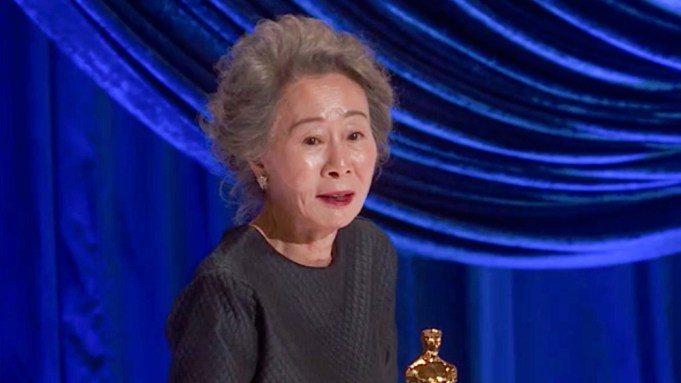 Raise a glass of Mountain Dew to Yuh-Jung Youn.

The celebrated Korean actress won an Oscar on Sunday night for her supporting role in “Minari,” Lee Isaac Chung’s semi-autobiographical drama about a family that relocates to rural Arkansas in the 1980s to start a farm. Youn made history as only the second Asian woman and first Korean to win an acting prize at the Oscars.

Accepting the award from Brad Pitt, whose company Plan B was a producer on “Minari,” Youn began her speech by playfully calling out Pitt’s absence on set. “Finally,” she said. “It’s an honor to meet you.”

Injecting some much-needed humor into the three-hour-long ceremony, Youn doled out several other jabs in her speech. “I cannot believe I’m here,” she said. “OK. Let me pull myself together.”

“As you know, I’m from Korea. Actually, my name is Yuh-Jung Youn. Most European people call me Yuh Youn and some of them call me Yuh-Jung. But tonight, you are all forgiven,” she said.

She also praised her fellow nominees: Maria Bakalova for “Borat Subsequent Moviefilm,” Glenn Close for “Hillbilly Elegy,” Olivia Colman for “The Father” and Amanda Seyfried for “Mank.” Youn’s victory continued a storied losing streak for Close, who was singled out for her turn as Mamaw in the otherwise much-derided adaptation of “Hillbilly Elegy.” As of Sunday, Close has faced eight acting defeats across four decades, tying the all-time record with the late Peter O’Toole.

“I don’t believe in competition,” Youn said. “How can I win over Glenn Close?”

As she continued and addressed the remaining supporting actress contenders, a charmed Seyfried mouthed from the audience, “I love her.”

“All the nominees, five nominees, we were the winner for different movies. We played different roles — so we cannot compete [against] each other,” Youn said. “Tonight, I’m here, I just have a little bit more luck, I think, maybe. I’m luckier than you. And also maybe it’s American hospitality for the Korean actor? I’m not sure.”

She concluded her speech by thanking her boys “who made me go out and work.”

“This is the result,” said Youn, holding up her gold statue. “Because mommy worked so hard.”

The 73-year-old Youn, whose film and television career spans over 40 years, was introduced to new audiences in the States through her performance as the wacky, unorthodox grandmother — who has a panache for highlighter-yellow soda — in A24’s “Minari.” Her fame outside of the country has led some to dub her the “Meryl Streep of South Korea.” Though flattered, Youn has dismissed those comparisons.

“I am just a Korean actress in Korea,” she told the Associated Press. “My name is Yuh-Jung Youn. So I like to be myself.”

The atypical awards season has been without cocktail parties and in-person screenings, a concession due to the pandemic. Yet Youn has been a delight through her computer screen as she picked up trophies from the SAG Awards, BAFTA Awards and Independent Spirit Awards. She also received nominations at the Critics Choice Awards and Gotham Awards.

Her charm radiated, via Zoom, earlier in April as she accepted a statue from the British Film Academy. “Every award is meaningful,” she said. “But this one, especially being recognized by British people, known as snobbish people, and they approve me as a good actor, I am very happy.”