Will Smith, Venus and Serena Williams on Reframing the Williams Family Story Through ‘King Richard’ 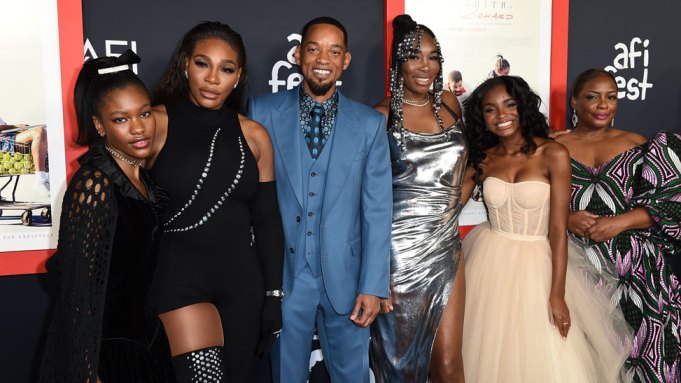 It was a family reunion for Will Smith at the gala AFI Fest screening of “King Richard” on Sunday night at the TCL Chinese Theatre in Hollywood, as his onscreen family shared the stage with Venus and Serena Williams, the real-life first family of tennis.

Smith’s own family got in on the red carpet action too, with Jada Pinkett Smith (who also served as an executive producer on “King Richard” alongside Will) and kids Willow and Jaden Smith posing for photographers outside the theater. Also joining in the family fun were Serena’s husband Alexis Ohanian and their adorable daughter Olympia.

Among the family members missing from the big event, though, was Richard Williams, Venus and Serena’s father and the person through whose eyes this story is told. Directed by Reinaldo Marcus Green and written by Zach Baylin, Smith portrays the Williams patriarch as the audience learns the real story behind Venus and Serena’s rise to the top of the tennis world with the help of the whole Williams clan, all beginning with Richard’s 78-page plan that predicted their greatness.

“It’s beautiful. I never was planning this moment. And then here it is,” Venus Williams told Variety on the red carpet, marveling to reporters over the fact that this was the first time she’d been to the TCL Chinese Theatre despite being a native of Compton.

Of the film itself, she added that “the story is told is also probably the best way it could be told.”

“There’s never a moment where we win Wimbledon — spoiler alert — in this film, or a U.S. Open, or a gold medal, or anything that has happened,” Venus explained. “But it’s an origin story of how a family actually succeeded. I’m so proud that it’s been being told this way.”

Serena also complimented the film’s efforts to reframe the family’s story, with a particular emphasis on crafting a true portrait of her father, who was often painted in the media as overbearing and generally over the top.

“It’s so cool we get to share with the world you know, everything that my father means to me and our family and all that he’s done for us,” Serena said. “My mom and my sisters (Lyndrea and Isha Price, who executive produced the film and was on set daily) and everyone was such a part of it, so it’s kind of cool to kind of see that come to life.”

Serena also shared that her father claims he hasn’t yet watched the film, but Smith has a couple scenes that he hopes Richard will appreciate.

“I would love for him to see either the reporter scene — where where he defends Venus, or the scene at the net [between Richard and Venus],” Smith told Variety.

“The scene at the net is where I felt like I would hope he saw how I feel about him,” he explained. “Because that scene is what I see in his heart. So I hope he would see a reflection of himself in that scene.”

The sequence mentioned is featured in part in the movie’s official trailer, as Richard explains to Venus the weight of representing every young Black girl through her career as a tennis star and how he hopes to have protected her from and prepared her for that pressure.

Smith noted that the scene was particularly weighty because it’s an intimate moments which Richard has written about but never discussed publicly.

“I’ve never seen him talk about those experiences [but] his daughters have heard him talk about it,” Smith added. “It was a really private moment that I was able to share, so I hope he felt honored and saw my love for him in that scene.”

Ellis also emphasized the way that this project honors the Williams family matriarch, Oracene Price, who also coached her girls in tennis, serving as the de facto Queen to Richard’s King in this film.

“Miss Oracene changed the face of tennis as we know it, and people don’t know that. So I’m so excited that people will hear her story,” Ellis said.

“King Richard” debuts in theaters and begins streaming on HBO Max on Nov. 19.