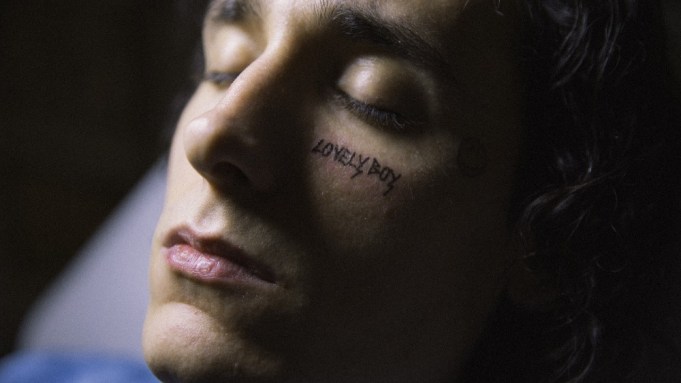 In Italian director Francesco Lettieri’s “Lovely Boy,” which is the closing film of Venice’s independently run Venice Days section, a rising star of Rome’s never before depicted trap music scene gets sucked into a spiral of self-destruction.

“Lovely Boy” is the sophomore feature by Lettieri, who made his debut with “Ultras,” a drama about Neapolitan soccer hooligans that plays worldwide on Netflix.

Both “Ultras” and “Lovely Boy” were lead produced by Rome’s Indigo Film, best known as the shingle behind Paolo Sorrentino’s Oscar-winning “The Great Beauty.”

The Rome-set pic tells the story of Nic, aka Lovely Boy, a talented trapper who has a tattoo on his face and performs in tandem with his friend Borneo la XXG. As their popularity rises he gets sucked into a spiral of drugs and self-destruction and swiftly reaches breaking point. The only way he can come to terms with himself is to flee from all the commotion. He lands at a rehab facility in the Dolomites that caters to people like him, substance abusers. In rehab Nic struggles to find the person he once was but starts to find himself by sharing with others the enormous solitude he holds inside.

“Lovely Boy” is “the story of what’s between emptiness and fulfilment, debauchery and everyday life, disintegration and construction, despair and hope,” says Lettieri in his director’s statement.

“The intention of the film is not to pass any kind of moral or sociological judgment, but to portray and convey emotions. Rome and the therapeutic community at the foot of the South Tyrolean Dolomites are two antithetical worlds that also represent the protagonist’s inner conflict,” he notes.

“On one hand Nic is a young man full of talent and sensitivity, on the other Lovely Boy is excessive and arrogant towards the whole world,” the director goes on to point out, calling the film “a classic parable of fall and rebirth that tells the struggle that growth always entails, at any age, and the wounds that we carry inside even once we’ve become – with great effort – adults.”

“Lovely Boy” is a Sky Original film produced by Nicola Giuliano, Francesca Cima and Carlotta Calori for Indigo Film. Indigo co-produced with Vision Distribution, which will release the film in Italy, and received support from IDM Film Fund & Commission of Alto Adige.