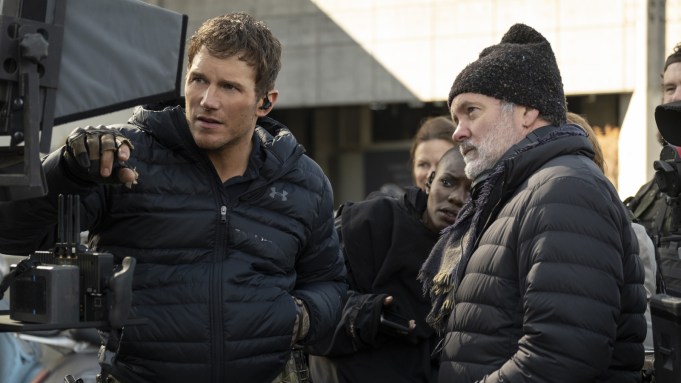 While it’s not uncommon for an animation director to make the leap into live-action filmmaking, it is rather rare for that first at bat to be a massive sci-fi blockbuster that isn’t based on any pre-existing properties. That’s the opportunity presented to Chris McKay, who transitioned from directing nearly four dozen episodes of “Robot Chicken” and the 2017 animated feature “The Lego Batman Movie” to helming “The Tomorrow War,” a time traveling alien invasion thriller starring Chris Pratt, J.K. Simmons, Sam Richardson and Yvonne Strahovski that is currently streaming on Amazon Prime Video.

“The Tomorrow War,” which was developed and produced by Skydance and co-financed by Paramount Pictures, was originally set to open in theaters last Christmas, but the pandemic forced the studio to push the film to July 2021. By January, with the theatrical landscape still clouded in doubt, Amazon snapped up the exclusive global rights to “The Tomorrow War” for a rumored $200 million. Other studio titles have been sold to streamers during the pandemic, including “The Woman in the Window” (from 20th Century to Netflix), “Coming 2 America” (from Paramount to Amazon) and “Happiest Season” (from Sony to Hulu). But nothing has quite approached the scale of “The Tomorrow War,” in which Pratt’s high school science teacher is drafted to help fight a war 30 years in the future against the relentless onslaught of vicious aliens known as Whitespikes.

McKay talked with Variety about his complicated feelings around his film’s sale to Amazon, how he used his background in animation to his advantage and why he still hopes to make a movie about Batman’s ex-sidekick, “Nightwing,” which he’s been attached to since 2017.

You’ve been working in animation for so long. How did you decide that this was going to be the project that you would direct in live-action?

I really want to do something original, as much as humanly possible. You get offered brands, and some of them are great and exciting. But to get something that’s completely an original concept in the sci-fi space, where it’s got a budget for a big epic scope with a movie star attached to it, and has a family drama at its heart — being offered that that was like a dream come true for me. That’s the thing that I want to do. So having it land in my lap, I was really lucky.

How did you apply your experience in animation to making this movie?

When you’re making reels in animation, you build them with either animatics, which storyboards edited together with picture and sound effects and music, or you’re doing layout, which is rudimentary blocking and camera work — in the best version, it’s the exact set that you’re going to end up using. Layout and pre-vis in live-action are basically the same thing. I was able to use that to help us get a handle on the action scenes.

When you’re directing actors in an animated movie, sometimes you’ve got two actors playing off of each other, but more often than not, it’s just the one actor who’s standing in front of a music stand and a microphone, and you and that actor are creating this world. When you’re on a live-action set for something like this, where there are no whitespikes or explosions, you are using the same kind of imaginative resources that you are bringing to the table in a voiceover booth. You happen to be on a street, and you’re pointing, ‘There’s Hummers coming this way, and there’s jets coming that way, and there’s a bunch of these creatures.’ You just use the actor’s imaginative resources. Everybody’s participating in this kind of childlike imaginative space which is a lot of fun.

This feels like such a big screen summer movie — how looped in were you when Paramount decided to sell the film to Amazon?

Obviously, people told me what their intentions were. This was would this have been December or January or something like that, so we were nearly finished with the movie, and talking about release dates. Because of where we’re at with COVID, I knew the writing on the wall. We were going to have to entertain some options. We’d had screenings in movie theaters from a test audience standpoint. The last one was probably in end of September, maybe beginning of October. So I’d seen the movie play four times in a movie theater with different audiences. We tested it in St. Louis, Kansas City and Phoenix. The testing was great. The studio was super happy. I was really excited about the fact that we had a movie that worked for people. My dream, obviously, would be to have a movie in a movie theater, right? Those are the experiences that changed my life.

I guess for me, the other thing that you want as a filmmaker is to have a dialogue with as many people as humanly possible. So to have a movie that comes out to 240 countries day in date, to be able to have that kind of dialogue with the world, that’s really exciting. We mixed the theatrical version of the movie, and then we mixed a version for home, from a sound perspective. And the HDR picture is the closest I’ll ever have to a guarantee that people will see what we did with the color correction and the visual effects. So those things are exciting.

It’s tough to answer that question. There’s things that you want, and there’s the realities of the world. I’m just hoping that people will crank their sound up, watch it on the biggest TV they can possibly find, bring your neighbors over so they don’t get mad at you because you crank the movie up, and try to watch it with as many people as you can in your house. It is a movie that’s meant to be experienced with with people. I really was fortunate to see it play with an audience, so I’m always gonna have that. It was something special.

I don’t want to spoil anything that happens in the movie, but do you foresee sequels or prequels set in this world with the characters or the creatures?

We had such a fun design process. We talked about the world of these creatures, where they came from, how they were created or raised, and how they were maybe being used. I like world-building experiments, especially when you have the potential of some kind of time travel. I think that a sequel could go in a lot of fun areas and the ethnographic study of the whitespikes in their world and where they came from, and what their purpose was, and all of that kind of thing. So yeah, I think that could be a lot of fun. And with this cast, too, we’re just getting started.

Speaking of the future, what projects are next for you?

“Nightwing” is still a movie that I really want to do. I love the character of Dick Grayson as a young adult, becoming his own kind of superhero character. That was gonna be a father and son story and also a revenge movie, which I was really excited about because there’s a lot going on in that script. It was gonna be really primal and pared down and like a real red meat movie in the best way.

Is it still happening?

I don’t have a firm commitment yet, but I hope that it’s something that we can still make. It has not been a priority these days; I’m hoping that it will become the priority soon. That’d be my favorite thing to come out of all of this stuff.

And what can you tell me about your latest project, “Renfield”?

“Renfield” is a story about Dracula’s assistant set in modern times, and it’s kind of a codependency success story. And it’s a comedy. It’s a horror movie. It’s an action movie. It’s about bad bosses. It’s written by Ryan Ridley, who worked on “Rick and Morty,” and it’s a really funny and emotional. It’s gonna be like a hard-R action movie, crazy-violent in an “Evil Dead 2” kind of way. That’s gonna be fun.