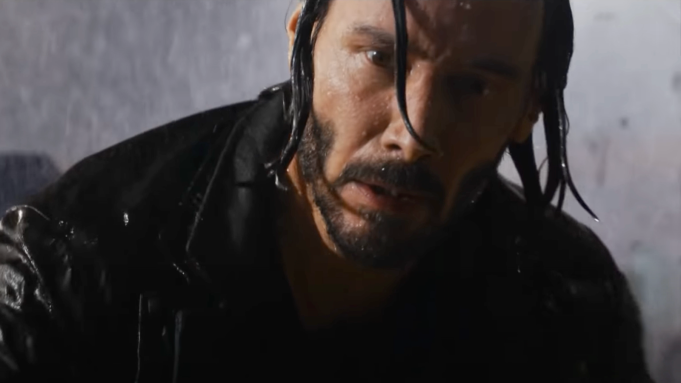 The first reactions to “The Matrix Resurrections” are in — and it’s a mixed bag, ranging from “terrific” to “bogged down in exposition.”

As the film’s social media embargo lifted on Thursday night, film critics and journalists took to Twitter to share their opinions about the franchise’s latest installment.

On the other hand, Cheat Sheet critic Jeff Nelson was less enthused with “The Matrix’s” latest outing, calling it “an almost 2.5-hour exposition dump with choppy action scenes reminiscent of the Bourne movies. It reuses far too much footage from previous installments and is meta to a fault.”

#TheMatrixResurrections is an almost 2.5-hour exposition dump with choppy action scenes reminiscent of the Bourne movies. It reuses far too much footage from previous installments and is meta to a fault.

Although People news editor Nigel Smith wrote that the movie is “bogged down in exposition like the previous two,” he said that it’s “more fun than I remember the sequels ever being.”

#TheMatrixResurrections is more fun than I remember the sequels ever being. Yes it's bogged down in exposition like the previous two, but there's a knowing wink to it all now. Newcomers Neil Patrick Harris and Jonathan Groff are key to that. Oh and the climax ROCKS. pic.twitter.com/2aWXYI7YAi

Saw #TheMatrixResurrections the other week (in IMAX!) and I enjoyed it! Easily better than 2 and 3. It feels like The Force Awakens – a nostalgic sequel/reboot to (maybe?) kick off a new franchise. Definitely rewatch the entire original trilogy in advance. Full review next week. pic.twitter.com/XHGQtkLcEB

But Mashable writer Alison Foreman wrote that in the film “nothing matters, and not in a cool nihilistic way.”

I am deeply happy for those who will enjoy #TheMatrixResurrections. I am, regrettably, not among them. It’s leagues better than Reloaded and Revolutions – which let’s be clear are really not good – but has bad stakes. Nothing matters, and not in a cool nihilistic way. pic.twitter.com/RnbQutdkKR

Forbes’ Scott Mendelson agreed, saying that it is a “comedy” with disappointing action and thin characters. However, he complimented the film’s “metatextual commentary.”

#TheMatrixResurrections is a comedy. The action is disappointing and the new characters are thin. But the metatextual commentary is biting. It wrestles with its own legacy in that JURASSIC WORLD/BAD BOYS 3/RP1 fashion. I prefer the first three, but this is a wild swing. pic.twitter.com/7i3n5qUvOq

IndieWire film critic David Ehrlich had a much better impression, wring that the film “despite (and because of) its infinite goofiness, is the boldest & most vividly personal Hollywood sequel since ‘The Last Jedi.’ A silky/sincere galaxy brain take on reboot culture that makes peace with how modern blockbusters are now only about themselves.”

The Matrix Resurrections, despite (and because of) its infinite goofiness, is the boldest & most vividly personal Hollywood sequel since The Last Jedi. a silly/sincere galaxy brain take on reboot culture that makes peace with how modern blockbusters are now only about themselves.

The fourth installment of the sci-fi franchise sees Keanu Reeves and Carrie-Anne Moss reprising their roles as Neo and Trinity, but they don’t remember each other — or their pasts. Along with Reeves and Moss, the cast includes Jada Pinkett Smith, Lambert Wilson and Daniel Bernhardt reprising roles from the original trilogy, as well as Priyanka Chopra Jonas, Christina Ricci and Jonathan Groff.

Lana Wachowski directed the film from a script she co-wrote with David Mitchell and Aleksander Hemon. Sisters Lana and Lilly Wachowski created “The Matrix” franchise and wrote and directed the first three installments, which were huge box office hits and have grossed more than $1 billion globally.

#TheMatrixResurrections is too self aware of its existence. Poking fun at itself a bit too much, it's very heavy on the love story, with not a lot of showstopping action and effects, which is what the people want. Best part is Jonathan Groff but that's just life at this point. pic.twitter.com/kXd8usdV0M

The first act of #TheMatrixResurrections is STELLAR. Smart, funny, weird, self-referential & unexpected. Add to it wildly inventive action sequences, lofty storytelling decisions & a TON of big ideas that will fuel lots of questions. Trust me, multiple viewings will be required pic.twitter.com/q4jt0KQqft

#TheMatrixResurrections is a Matrix sequel, that’s for sure. Better than the last two, it still pales in comparison to the original. Some of the ideas bandied about are interesting, and the cast is game to be back, but not enough feels new here. Solid, but a letdown.#TheMatrix pic.twitter.com/fbsDhEzrO3

Absolutely adored #TheMatrixResurrections, which builds on where the sequels left off in beautiful and unexpected ways, and presents a world that's entirely consistent with what came before and also opens it up to a host of new stories. My synapses have been firing for days. pic.twitter.com/X16TuKK6Vc