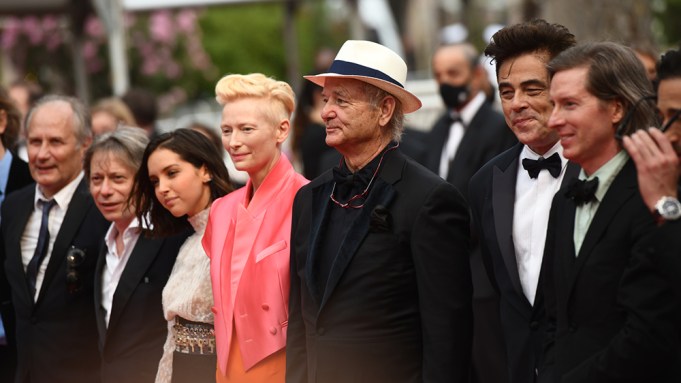 There were so many movie stars at the premiere of Wes Anderson’s “The French Dispatch” on Monday night at the Cannes Film Festival, it almost felt like pre-pandemic times.

The streets near the Palais were shut down. The crowds were screaming. And Timothee Chalamet, in a silver suit, cut through the July heat to sign autographs and take selfies with fans, as he playfully stuck out his tongue.

Two hours later, “The French Dispatch” had earned one of the biggest standing ovations so far at the 74th edition of Cannes. The applause continued for nine minutes for Anderson and his cast in attendance, which included Bill Murray, Owen Wilson, Tilda Swinton, Adrien Brody, Stephen Park, Benicio Del Toro and Chalamet.

But one actor couldn’t make the trip. Lea Seydoux was absent from the premiere, as she’s quarantining in Paris after a positive COVID-19 test.

The Searchlight release follows a weekly magazine that covers global politics, culture, art and food in a special interest section of a daily newspaper from, uh, Kansas. Murray plays a devout editor to a gang of expatriate writers who must package their final collection of stories. Through the feature write-ups, comic strips and pictorials, Anderson weaves several vignettes and plot threads.

As the night began, there were signs that this wasn’t going to be a regular Cannes premiere. Instead of a black car, the cast — along with composer Alexandre Desplat — arrived together in a giant gold party bus, escorted by French motorcycle police. Murray took off his mask (which had an imprint of a chin on it), basking in the flashing lights.

Anderson stopped his ensemble at the bottom of the carpet to take a group photo. Many of the actors also seemed to be doing their own camera work. Wilson filmed the crowds at the bottom of the carpet, and Brody pulled in Chalamet for a seflie at the top of the stairs (violating the festival’s no-selfie rule, although none of the ushers tackled his phone — as they do with regular attendees attempting the same). Swinton, who has five movies playing at Cannes, wore a pink gown with shimmering gold sequin-covered sleeves. Chalamet leaned his head on her shoulder.

Once Anderson entered the theater, the Cannes crowd welcomed him with a rapturous standing ovation. Chalamet and Swinton held hands walking down the aisle, and he mouthed “Queens baby!” to the cameras as he clapped along.

The film is a love letter to journalism, although ironically Anderson declined to hold a press conference with his cast (as is tradition for in-competition films) or conduct any interviews with reporters in Cannes. The end credits are dedicated to a list of editors and writers that inspired the film, among them The New Yorker’s Harold Ross, William Shawn, Lillian Ross and Janet Flanner; James Baldwin; Ved Mehta and more.

After the lights went back up, Murray walked from seat to seat hugging every person in the cast. And the Chalamet-Swinton show continued — he held up the piece of paper with her name on it (which had been attached to her seat). She took from him and stuck it on his back.

Look at what Tilda Swinton did to Timothee Chalamet during ‘The French Dispatch’ standing ovation. #Cannes2021 pic.twitter.com/MNmkzdUktA

“I hope we come back with another one soon,” Anderson said in brief remarks to the crowd. “Thank you.” As he tried to leave the theater, the audience inside the Palais continued to shower him with more applause.

“The French Dispatch” was acquired by Searchlight in September 2019 and was meant to play Cannes 2020 — which was scrapped as a result of the global pandemic. The release date was pushed to October 2020 only to be delayed again. The movie is now scheduled to open in theaters in the United States on Oct. 22.