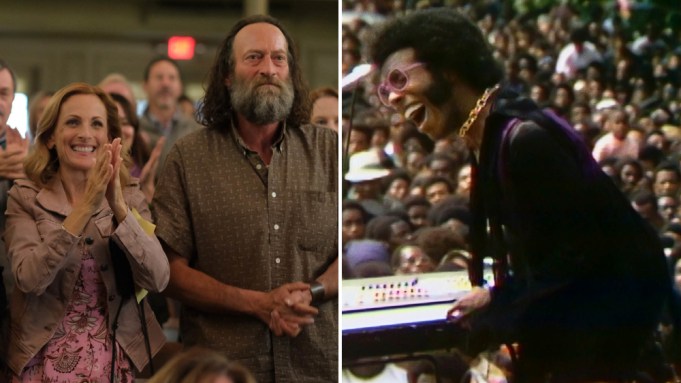 The 2021 Sundance Film Festival concluded Tuesday night with a virtual awards ceremony, honoring “CODA” — a family drama centered on a high school student who is the child of deaf adults (hence the title) — with four prizes in the U.S. Dramatic Competition category: the grand jury prize, the directing prize, the audience award and a special jury prize for best ensemble.

It is the first film in Sundance history to win all three top prizes in the U.S. Dramatic category.

“I hope that this opens the door to people getting that audiences want to see these kinds of stories,” director Siân Heder said while accepting the audience award. “And I hope that this means that more stories that center deaf characters and characters with disabilities get put front and center because clearly people want to respond to that.”

“CODA” already broke records at Sundance when Apple Studios picked it up for $25 million after a fierce bidding war following the film’s debut on the festival’s opening night.

“Summer Of Soul (…Or, When The Revolution Could Not Be Televised),” the feature documentary directed by the Roots frontman Ahmir “Questlove” Thompson, won both the grand jury and audience awards in the U.S. Documentary Competition category. Drawing from archival footage that had been hidden in a basement for over 50 years, Thompson recreated the Harlem Cultural Festival, a massive music event celebrating African American music that 300,000 attended in the summer of 1969.

All of Sundance’s opening night films took home top prizes, in fact: “Flee,” a largely animated documentary about the life of a gay Afghan refugee, earned the grand jury prize in the World Cinema Documentary Competition category; and “One for the Road,” a buddy road movie about two friends traveling through Thailand, earned a special jury prize for creative vision in the World Cinema Dramatic Competition category.

The biggest winner in the World Cinema Dramatic Competition, however, was “Hive,” which, like “CODA,” also earned the grand jury prize, audience award, and directing award — another Sundance first. From director Blerta Basholli, the film follows a single mother struggling to survive after her husband disappeared during the war in Kosovo.

“This really, really means a lot … to all the women who really needed their voice to be heard, at Sundance and everywhere in the world,” said a tearful Basholli while accepting the grand jury prize. “This is way, way too much for me to handle.”

The NEXT category awarded the audience award to “My Belle, My Beauty,” about the unexpected reunion of two women in France who used to be polyamorous lovers; and the innovator award to the animated fantasy “Cryptozoo.”

Underlining the festival’s commitment to expanding opportunities for representation behind the camera, three of the four directing winners this year were women.

Comedian Patton Oswalt hosted the event – “or as I’m known at Sundance, discount Giamatti,” he joked when opening the show. Oswalt kept the ceremony moving at a brisk clip, pivoting from a series of one liners about Sundance luminaries to a series of pre-recorded remote presentations.

The virtual ceremony allowed for acceptance speeches that were uncommonly personal and poignant. Heder accepted her directing prize in her home, filmed by her husband and with her two children at her side popping a confetti bomb. Questlove expressed total disbelief at his two prizes while in a car on his way to his day job at “The Tonight Show Starring Jimmy Fallon.” Theo Anthony accepted the U.S. Documentary Competition special jury award for nonfiction experimentation for “All Light, Everywhere” — about the concepts of perception and objectivity in a world of constant cameras and surveillance — while walking his dog in snowbound Brooklyn, New York.

In the same category, Natalia Almada went to a San Francisco drive-in to accept her directing prize for her film “Users,” about the relationship of parents and children to technology. And filmmakers Rintu Thomas and Sushmit Ghosh celebrated the World Cinema Documentary audience award for their film “Writing With Fire,” about India’s sole newspaper run by Dalit women, by showing their families reacting to the news.

As with so many other live events, the COVID-19 pandemic forced Sundance to radically alter how it conducted the 2021 festival, which traditionally unfolds over 10 days in Park City, Utah. Instead, the full festival this year is running for six days, and along with screenings in Park City, the festival has hosted screenings virtually, as well as at drive-ins, arthouse theaters and cultural institutions across the entire country, including in Alabama, Colorado, Hawaii, Ohio, New York, Texas and Puerto Rico.

Grand Jury Prize: “Summer Of Soul (…Or, When The Revolution Could Not Be Televised)”

Audience Award: “Summer Of Soul (…Or, When The Revolution Could Not Be Televised)”

Special Jury Award for Creative Vision: “One for the Road,” Baz Poonpiriya

NEXT Audience Award: Marion Hill, “My Belle, My Beauty”