‘Stillwater’ Slammed by Real Life Inspiration Amanda Knox: Matt Damon and Others Are Profiting From My Story 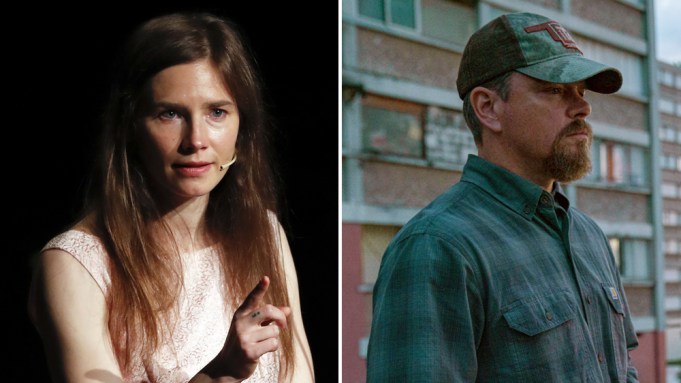 Amanda Knox, an American exchange student who spent nearly four years in Italian prison for the 2007 murder of her roommate Meredith Kercher before being acquitted in 2015, was the inspiration for the just-released “Stillwater,” starring Matt Damon and directed and co-written by Tom McCarthy.

Although “Stillwater” spins a fictitious story, McCarthy has not been shy about name-checking Knox during the press cycle, and a Vanity Fair interview with her name in the headline inspired Knox to take to Twitter on Thursday to slam the film and creative team.

In the film, Abigail Breslin plays Allison Baker, an American foreign exchange student imprisoned in a jail in France after being convicted of murdering her roommate, a plot that shares some — but not all — similarities with Knox’s story. Damon plays Bill, her conservative father, who travels from Oklahoma to Marseille, in the hopes of catching the real killer and setting her free.

The thread, which was also published on her Medium blog, opens with Knox processing her identity and the thread between the film and real-life events: “Does my name belong to me? Does my face? What about my life? My story? Why is my name used to refer to events I had no hand in? I return to these questions because others continue to profit off my name, face, and story without my consent. Most recently, the film ‘Stillwater.'”

“By fictionalizing away my innocence, my total lack of involvement, by erasing the role of the authorities in my wrongful conviction, McCarthy reinforces an image of me as a guilty and untrustworthy person,” Knox writes. “And with Matt Damon’s star power, both are sure to profit handsomely off of this fictionalization of ‘the Amanda Knox saga’ that is sure to leave plenty of viewers wondering, ‘Maybe the real-life Amanda was involved somehow.'”

Knox also took issue with the film being referred to as the “Amanda Knox saga” in the press, even though she was acquitted of the crime.

“In the wake of #metoo, more people are coming to understand how power dynamics shape a story,” she writes. “Who had the power in the relationship between Bill Clinton and Monica Lewinsky? The president or the intern? It matters what you call a thing. Calling that event the ‘Lewinsky Scandal; fails to acknowledge the vast power differential, and I’m glad that more people are now referring to it as ‘the Clinton Affair’ which names it after the person with the most agency in that series of events. I would love nothing more than for people to refer to the events in Perugia as ‘The murder of Meredith Kercher by Rudy Guede,’ which would place me as the peripheral figure I should have been, the innocent roommate. But I know that my wrongful conviction, and subsequent trials, became the story that people obsessed over. I know they’re going to call it the ‘Amanda Knox saga’ into the future.”

In the essay, Knox also invites Damon and McCarthy to be guests on her podcast, “Labyrinths,” to discuss the film.

“Stillwater” is hitting theaters weeks after an emotional five minute standing ovation at its Cannes premiere. Focus Features is also banking on the film as an awards player, setting up the first in-person Oscars FYC special screening and conversation of the season for the title.