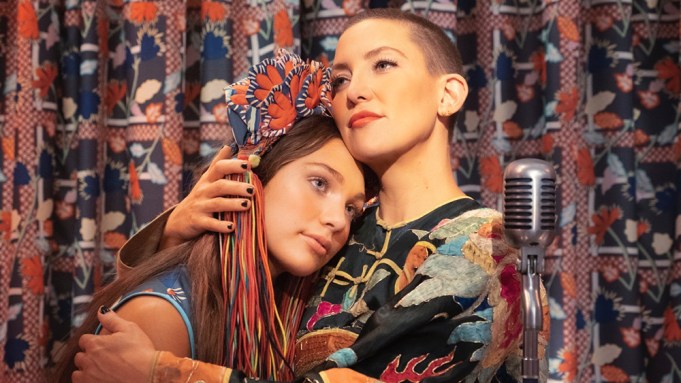 “Music,” the feature film directorial debut from Sia, is finally hitting the big and small screen.

The musical drama — starring Kate Hudson, Maddie Ziegler and Leslie Odom, Jr. — will play in select Imax theaters for one-night only on Feb. 10. It will then be released on premium video-on-demand platforms on Feb. 12.

Co-written by Sia and Dallas Clayton, “Music” follows Zu (Hudson), a free-spirit estranged from her family. After her grandmother dies, she finds herself the sole guardian of her half-sister, played by Ziegler, a teenager who is nonverbal and on the autism spectrum. With assistance from their neighbor Ebo (Odom), they learn how to navigate life’s obstacles.

“I’m going to help her just like she helps me,” says Hudson’s character, who struggles to stay sober over the course of the newly released trailer. “I’m actually learning how to love because I love her.”

Sia wrote 10 new songs for the movie, which features colorful fantasy musical sequences that give audiences a vivid window into the character’s inner lives. Along with Hudson, Ziegler and Odom, the cast also includes Ben Schwartz, Tig Notaro and Kathy Najimy.

After the first teaser trailer was released in November, Sia received backlash for casting Ziegler, a neurotypical actor, in the role of an autistic person. Ziegler, who gained national fame on the reality show “Dance Moms,” has previously collaborated with Sia on numerous music videos, including “Chandelier” and “Elastic Heart.” Sia defended the casting and called the movie “a love letter to caregivers and to the autism community.”

“I have my own unique view of the community, and felt it is underrepresented and compelled to make it,” Sia said. “If that makes me a shit I’m a shit, but my intentions are awesome.”

Vertical Entertainment is distributing “Music.” Watch the new trailer above.