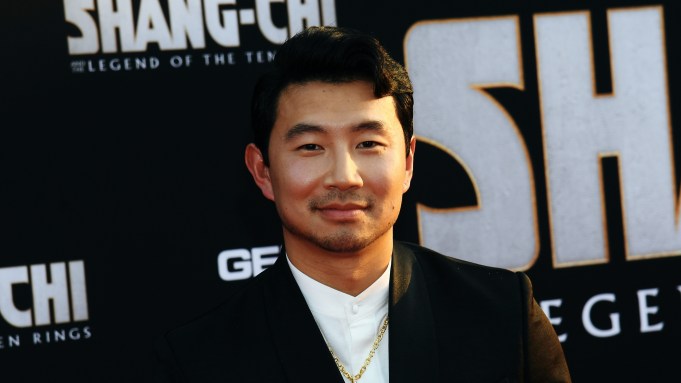 This is a tale of a few tweets.

“Shang-Chi” star Simu Liu was practically giddy with excitement as he posed on the red carpet outside the El Capitan Theatre in Hollywood ahead of the world premiere of Marvel Studios’ first Asian-led superhero film.

Hours before Monday night’s red carpet, Liu tweeted to his followers, asking them to “ask me a question so I don’t start to fixate on the nerves and the anxiety and the insecurity.” The roller-coaster of emotions is largely understandable given that starring in a Marvel film is a major moment in the career of any actor. But the rising star from Mississauga, Ontario, Canada — best known for his role on “Kim’s Convenience” — kept the larger significance of the event at front of mind.

“No pressure, right?” Liu quipped, speaking to Variety about the responsibility associated with being “the first,” adding, “It’s such an incredible honor. And I hope that it’s not the last.”

“Because we’ve been celebrating a lot of firsts in our community — when ‘Crazy Rich Asians’ came out three years ago, we celebrated that as the first studio movie with a predominantly Asian cast in almost 25 years,” Liu continued. “I’m looking forward to the moment where we no longer celebrate firsts. We’re celebrating seconds, and thirds, and fourths, and fifths. So I’ll take this moment for what it is. It is absolutely that watershed moment. … But I hope that there are many more just like it afterwards.”

The moment has been a long time coming for Liu, who famously won the role after cheekily tweeting to Marvel a few times about the part. Granted, Liu’s most famous tweet — “OK @Marvel, are we gonna talk or what #ShangChi” — wasn’t read by studio executives until after he’d already snagged the role, but at Monday night’s premiere, questions lingered about a different social post.

Over the weekend, the actor appeared to take umbrage with Disney CEO Bob Chapek saying the theatrical-only release strategy for “Shang-Chi” would be “an interesting experiment” during a Thursday earnings call with investors. Despite rising COVID-19 concerns, the movie, which debuts Sept. 3, will get a 45-day theatrical release before launching on Disney plus.

Seemingly in response to Chapek’s comments, Liu tweeted: “We are not the experiment. We are the underdog; the underestimated. We are the ceiling-breakers. We are the celebration of culture and joy that will persevere after an embattled year. We are the surprise.”

On the red carpet, Liu explained why he posted the message.

“I just wanted people to know how fired up I was for this movie,” the actor said. “It’s been a tough, tough time for everybody. And, I think sometimes it’s just so important to get messaging through that’s just emotional. It’s raw.”

He continued: “And it just shows the world just how much I, and we all, believe in this movie and how incredible it’s going to be. It’s truly going to change the world.”

Co-written and directed by Destin Daniel Cretton, the movie boasts a star-studded and almost exclusively Asian cast — starring Liu and Awkwafina, with screen legends Michelle Yeoh and Tony Leung, as well as Meng’er Zhang, Fala Chen, Benedict Wong, Ronny Chieng, Andy Le, Jodi Long and Dallas Liu. And because comic book fans, like Liu himself, have been waiting decades to see an Asian story centered in the MCU, the actor is hopeful fans will appreciate the breadth of the movie’s themes.

“It is a celebration of culture. It’s a celebration of coming of age,” Liu explained. “It’s also, by the way, got some of the most incredible action sequences you’ve ever seen.” And because his superhero doesn’t wear a mask, nor armor, nor a cape, Liu notes, “What you see is what you get,” — a phrase that also rings true of the actor himself.

Following the movie’s premiere, Liu took to Twitter once more to share a recap of the evening, writing: “Truly a wonderful night that I will remember forever. My heart is filled with gratitude. I can’t wait for you guys to watch!!”