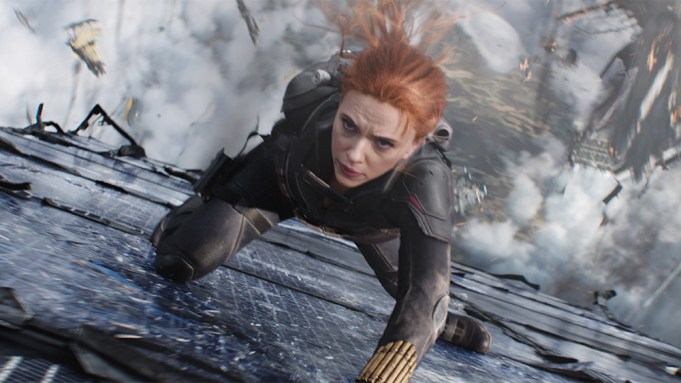 Disney’s decision to release “Black Widow” on Disney Plus at the same time it hit theaters has sparked a legal battle with Scarlett Johansson, the actress tasked with playing the Marvel superhero.

In a lawsuit filed Thursday in Los Angeles Superior Court, attorneys for Johansson allege that the star’s contract was breached when the studio opted not to debut the film exclusively in theaters, a move they claim depressed ticket sales for the Avengers spinoff. Much of Johansson’s compensation was tied to the box office performance of “Black Widow” — if it hit certain benchmarks, bonuses would kick in.

“Disney intentionally induced Marvel’s breach of the agreement, without justification, in order to prevent Ms. Johansson from realizing the full benefit of her bargain with Marvel,” the suit reads.

Disney announced in March that “Black Widow”  would premiere simultaneously on the studio’s subscription-based streaming service, for a premium $30 price, as well as on the big screen. The move was made as the movie theater industry was rebounding from COVID-19 closures and capacity restrictions. On July 9, “Black Widow” set a pandemic-era box office record with its $80 million debut in North America and earned an additional $78 million overseas. It also pulled in $60 million on Disney Plus. Ticket sales steeply declined in subsequent weeks and currently stand at $319 million globally, putting “Black Widow” on track to become one of the lowest-grossing Marvel movies of all time.

Shortly after its debut, the National Association of Theatre Owners, the industry’s main trade organization, asserted the simultaneous release of “Black Widow” in theaters and on streaming “costs Disney money in revenue per viewer over the life of the film.”

However, the suit notes that Disney’s stock rose after the company disclosed the rental figures.

“Disney chose to placate Wall Street investors and pad its bottom line, rather than allow its subsidiary Marvel to comply with the agreement,” the suit reads. ” To no one’s surprise, Disney’s breach of the Agreement successfully pulled millions of fans away from the theatres and toward its Disney+ streaming service.”

The Wall Street Journal, which broke the news of the lawsuit, reports that sources close to Johansson estimate that the decision to release the film concurrently on Disney Plus resulted in $50 million in lost bonuses.

Johansson’s legal salvo comes as new distribution paradigms and the COVID-19 pandemic are reshaping the way that A-list actors are paid for their work. Many top actors include backend profit participation as part of their contracts. But the rise of streaming services, such as Netflix, has removed those forms of compensation and the decision by traditional movie studios, like Warner Bros. and Disney, to release films on their own in-house subscription services has further upended these old ways of doing business. When Warner Bros. opted to send its entire film slate to HBO Max, realizing that movie theaters were only operating at limited capacity for much of the year, the studio had to pay tens of millions of dollars to the stars of those films. That resulted in actors such as Will Smith, Denzel Washington, and Keanu Reeves earning their full back-end on the movies that Warner Bros. released on its new service. If successful, Johansson’s suit could embolden more actors to seek additional compensation for films that migrated to streaming services and may lead to agents including stricter language in contracts regarding compensation if an exclusive theatrical release is compromised or bypassed. Johansson’s attorneys suggested that her suit could be a precedent setter.

“It’s no secret that Disney is releasing films like Black Widow directly onto Disney Plus to increase subscribers and thereby boost the company’s stock price – and that it’s hiding behind Covid-19 as a pretext to do so,” John Berlinski, an attorney for Johansson, said in a statement to Variety. “But ignoring the contracts of the artists responsible for the success of its films in furtherance of this short-sighted strategy violates their rights and we look forward to proving as much in court. This will surely not be the last case where Hollywood talent stands up to Disney and makes it clear that, whatever the company may pretend, it has a legal obligation to honor its contracts.”

Johansson legal team said that representatives for the actress were worried that “Black Widow” would debut on Disney Plus even before coronavirus brought life to a standstill. As part of the suit, they share emails from the star’s management group that asked the studio to guarantee that “Black Widow” would premiere exclusively in cinemas. In response, Marvel Chief Counsel Dave Galluzzi promised a traditional theatrical bow, while adding “We understand that should the plan change, we would need to discuss this with you and come to an understanding as the deal is based on a series of (very large) box office bonuses.”

Spokespeople for Disney did not respond to a request for comment.