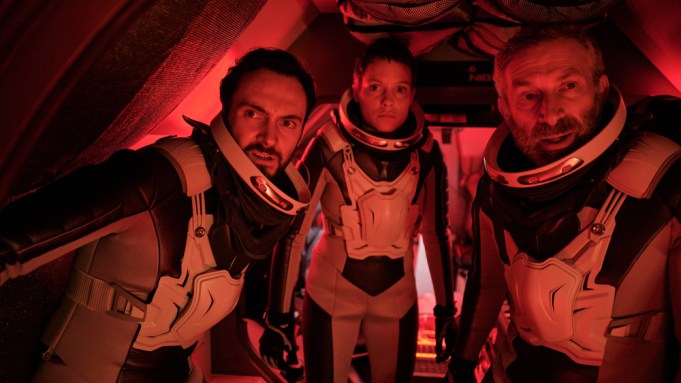 The Playmaker Munich has released the first teaser for upcoming sci-fi movie “Rubikon,” which is one of seven international genre projects selected for this year’s Frontières Buyers Showcase, which is running during the Cannes Film Festival.

“Rubikon,” directed by Magdalena Lauritsch and written by Jessica Lind and Lauritsch, is in post-production. Johannes Mücke, a longtime collaborator of Roland Emmerich, is responsible for the production design.

In the film, following a catastrophe on Earth, the planet is covered in a mysterious toxic fog. The crew of the space station known as Rubikon – Hannah (Julia Franz Richter), Gavin (George Blagden) and Dimitri (Mark Ivanir) – must decide whether to risk their lives to get home and search for survivors, or stay safe in the sophisticated station’s “algae symbiosis system,” which makes them fully self-sufficient.

The Playmaker Munich described “Rubikon” as “a highly entertaining science-fiction feature and at the same time a social commentary about a moral dilemma.” The company added: “Do we owe people in need whom we don’t know? Can we still live a jaunty life in a social bubble, while knowing how much pain and misery there is outside? Are our lives, and those of whom we love, too valuable to sacrifice for a noble but unrealistic greater good? This film questions whether we have the right to seal ourselves off in safety and ignorance from ongoing problems in the world.”

“It was a huge challenge and at the same time pure joy to produce ‘Rubikon,’” Loredana Rehekampff of Samsara Filmproduktion said. “‘Rubikon’ is a sophisticated science-fiction film with an amazing production value and most importantly with a captivating story.”