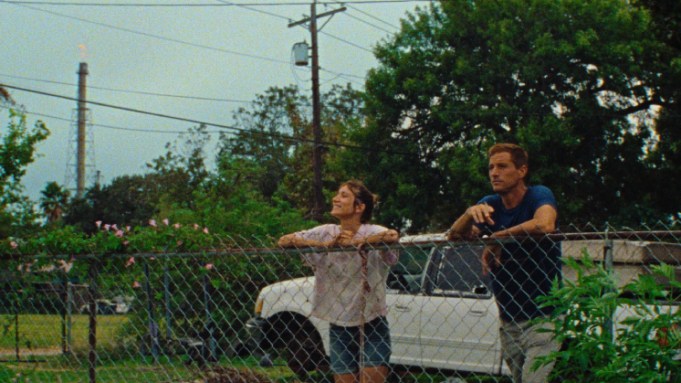 With the musical accompaniment of NSYNC’s “Bye Bye Bye,” A24 has released the first trailer for Sean Baker’s “Red Rocket” with Simon Rex.

Displaying Mikey’s smooth-talking charm in a turquoise tie-dye shirt, the trailer shows him bike-riding to job interviews, getting into verbal spats and claiming to be able to “100% out-cardio” a guy who gut-punches him outside a drive-thru donut shop. “Red Rocket” premiered at the Cannes Film Festival before making stops at Telluride and New York, receiving praise from critics and festival-goers, and bringing awards buzz for the film and its actors.

“Red Rocket” marks a drastic change of pace for Rex. The model, actor and rapper is best known for lighter fare, like his role in three of the “Scary Movie” films and his studio albums released as Dirt Nasty or with his group Three Loco. However, Rex’s dramatic turn in “Red Rocket” has received critical acclaim — Variety’s review from the Cannes Film Festival, where the movie premiered in competition, praised his “ability to play the subtext” and noted that this could be his “big comeback.”

Rex spoke about his comeback with Variety exclusively on the season premiere episode of the “Awards Circuit Podcast.”

This marks the fourth collaboration between Baker and Bergoch: the pair co-wrote “Starlet,” “Tangerine” and “The Florida Project,” all of which Baker also directed. Together with Alex Coco, Samantha Quan, Alex Saks and Shih-Ching Tsou, Baker also produces, with Erin Yarbrough as associate producer. Executive producers are Glen Basner, Ben Browning, Alison Cohen, Milan Popelka and Jackie Shenoo. “Red Rocket” was shot on 16mm by Drew Daniels, the cinematographer for A24’s “Waves.”

The film is set to play at the Mill Valley and Middleburg film festivals this month, before being released in theaters on Dec. 3.