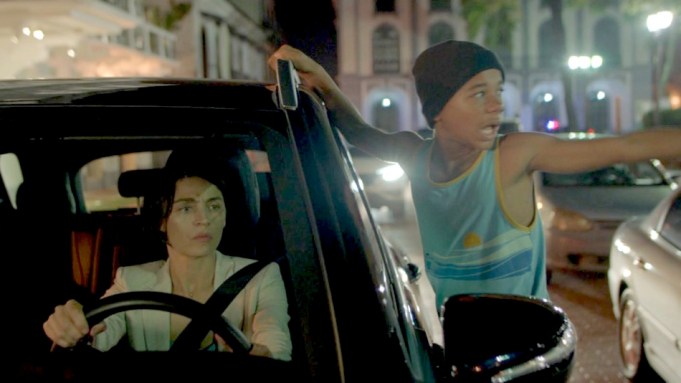 Just months prior to its world premiere, young “Plaza Catedral” actor Fernando Xavier de Casta was shot to death. The prescient portrayal of a society fractured by violence is Panama’s submission for this year’s Academy Award for Best International Feature Film. As a co-production between Panama, Mexico and Colombia, it is Benaim’s second fiction feature film after his 2009 comedy “Chance.” It is repped for worldwide sales by Luminosity Entertainment and Gulfstream Pictures. With the logline, “How far would you go to help a stranger?” the film features 40-year old mother Alicia (Ilse Salas) who is grieving over her 13-year old son. After initially avoiding street-kid Chief (Fernando Xavier de Casta), she takes him in when he turns up at her doorstep with a gunshot wound.

A key theme underlying the film is the way that Panama’s affluent elite and foreigners are ignoring the plight of the underprivileged. In the film, Chief remarks of Alicia “It’s people like you who are ruining Panama.” Alicia bonds with Chief as she tries to come to terms with the death of her own son. This takes her to the city’s slum areas, where gang violence is rife.

Xavier de Casta provides a powerful performance as a local kid living on the edge. When he disappears from Alicia’s apartment, she visits the morgue, where she sees the bodies of two murdered children, highlighting the omnipresent danger. The young actor’s untimely death brings further poignancy to the film, which is dedicated to the children and teenagers who die every day in Latin America, honoring their “memory and shattered dreams.”

In an in-depth interview with Variety, Benaim talks about his principal motivations for making the film as well as his upcoming projects.

One of the main themes of the film is the gulf between rich and poor. Can you speak on that?

Governments in Latin America have been traditionally very much afraid of anything that could be confused with communism. Any politics that pay too much attention to the economic or social divide are usually rejected. Society and governments seem to think that the only way to have equality is to make the rich poorer. But no one thinks about taking on the challenge of making the poor richer – because that sounds like an impossible dream. Growth brings new problems that deliver greater imbalance, and social problems get worse, and that cycle keeps on looping until things seem to be so out of control, as is the case in large countries such as Brazil, Colombia, Mexico. Fortunately, Panama is a small country, so its problems can be solved more easily, I think.

How did you adjust to the tragic death of Fernando?

It was so sad and strange. At a certain level his death was related to the pandemic. His whole life shut down. We had heard from his family that he was having some trouble because he couldn’t go to school or to the Enlaces dance academy. The teachers used to help him with his homework, but all that stopped during the pandemic. He had to stay in the neighborhood, where the houses are very small, with many family members. At some point he started going outside. We don’t know exactly what happened. It’s really hard to even imagine that we’ve lost this person that had all this energy, hope and dreams. It’s a very delicate issue, but I know that if Fernando were still alive he would have wanted the film to go as far as possible. Some people asked me if I changed the ending. The only thing we changed was the final dedication. It’s so strange, because he was uncomfortable portraying the character. He was acting like a mean kid that he knew from the streets, but he wasn’t one of them.

Your films all seem to focus on key issues of Panamanian identity.

What has usually captured my attention in Panama is things that seem to me to be urgent, usually social issues. Things that that I feel are urgent to talk about but that remain silent.

You provide a cameo performance in the film as the real-estate developer, Jack. Did the fact that you also acted in this film increase the intensity of your involvement with the pic?

I did it mostly to take a chance, to do something a bit outside of my comfort zone for the sake of the film, and for my own experience. I knew the character very well and felt that I could play it. I feel so involved with this film (and almost every other one I’ve made) from the beginning until the last detail of the last moment of the process, because I’ve been thinking about it for years.

How did the pandemic affect the pic?

We finished the shoot in October 2019 and were just starting post production when the pandemic hit. We did everything online. The editor was in Chile. I was in Tel Aviv. The music was done in England by Matthew Herbert, with a special participation from the Panamanian pianist, Danilo Perez, who lives in Boston. The sound was mixed in Colombia by our co-producer. We did the image post-production in Mexico, because the DP was there. We did the ADR with the actors in Panama and Mexico. It doesn’t matter where you are any more.

Ruben Blades is an executive producer on this film. How did making your documentary about him influence your vision on these issues?

For me he represents the mix of the Latin American mentality and the critical thinking and free thinking of the Anglo-Americans and the Europeans. He embraces things from different cultures and then applies them to our own local context. His songs are all very precise, about something in Latin America, but they become universal because they come from a universal perspective. His song “Plástico” is a good example. It’s very inspirational. He finds humor and joy in the midst of tragedy. I guess I am a result of that mix because I was born and grew up in Panama and have lived there most of my life, but my grandparents were Polish and had fled from the war, where several family members had been killed by the Nazis.

What are your next projects?

I am developing two feature films but can’t disclose details at present. One will be my first English-language project, based on a novel whose rights I bought during the pandemic. The other is called “Tropical Paradise,” whose starting point is my own childhood. Growing up in Panama was super joyful. You know I really feel like it was like a paradise. We grew up in a place where everything was perfect – in terms of nature, friends and family. Even now people are still very joyful in the midst of great hardship and tragedy. That’s really inspiring.