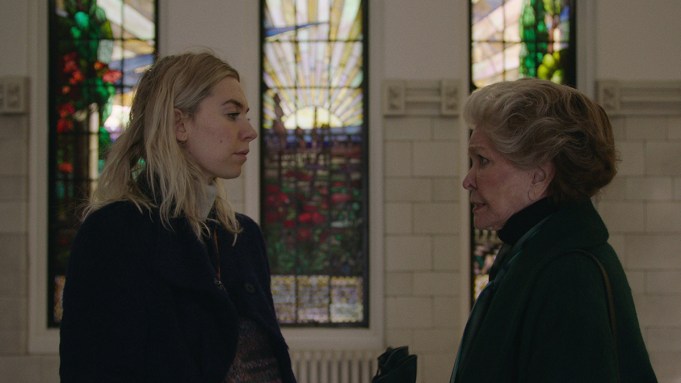 On Friday, Netflix’s Oscar-contending film “Pieces of a Woman” is released, shining a light on the taboo topics, which are rarely discussed in society, but highly common for women and families around the world.

The subject matter is what attracted star Vanessa Kirby to the project, along with Ellen Burstyn, who says the film is emblematic of the strides Hollywood has taken when it comes to the way women are portrayed in media.

“When I started out, I started out in the 1950s, so no, it would not have been possible at all! Not for many reasons. But we’ve come a long way in those 150 years,” Burstyn says, with a laugh.

“Not just in film, but with women — we acknowledge women as human beings,” the legendary actor continues.

Recalling her six decades in Hollywood, Burstyn speaks of “Alice Doesn’t Live Here Anymore,” the 1974 film that won her the best actress Oscar and marked her first collaboration with a then-unknown Martin Scorsese, who is an executive producer on “Pieces of a Woman.”

“That line that I put into ‘Alice Doesn’t Live Here Anymore,’ when I say, ‘I mean, it’s my life, it’s not some man’s life that I’m helping him out with,’ that really was the way that it was when the change started, whenever Ms. magazine was founded, I guess in the early 70’s,” Burstyn says. “When I did ‘Alice Doesn’t Live Here Anymore,’ I did not really recognize the women in film; they did not match the women I knew in my life. It was my intention then — this was in 1974 or probably 1973 — that I wanted to tell a story like women that I knew: women that were raising a child alone and earning a living and coping, both as a mother and as a person, and coming into their own being.”

“So, to do it on film?” Burstyn says, speaking about portraying child loss in Kirby’s character. “That’s pretty bold.”

“Pieces of a Woman” starts with an extended 23-minute scene, which was shot in one take, where Kirby’s character Martha gives birth, and then tragically loses the baby during the home birth. The scene is tough to watch, and painfully portrayed by Kirby, who received the best actress award at the Venice Film Festival and is a top contender to receive the Oscar nomination.

When Kirby received the script, she had never read anything like it and certainly had never seen it portrayed on screen before.

“It felt like a total journey of female courage,” Kirby tells Variety, explaining that the film “gives a voice to a subject that is so often silenced and so rarely spoken about.”

In preparation for her role,  Kirby spent time with many women who had been through losing a baby at many different stages, whether throughout pregnancy or just after they’re born. She also watched a woman give birth in real life, which she says changed her life forever.

“Watching her do that, seven hours, it was like the most powerful act that I’ve ever experienced in my life,” Kirby says with her jaw dropped. “She had to surrender everything and just let her body do it and become so primal and so animal and let that innate wisdom and intelligence take over and run the show. Even though she was in the most amount of pain she’s ever been in her life, something beautiful was happening. It taught me that pain can sometimes lead to something beautiful, and sometimes just getting through it and having the strength to.”

Martha has a tough journey, struggling to articulate her emotions and alienating those around her, including her mother, played by Burstyn, and her husband, played by Shia LaBeouf. Kirby believes her character has a tough time speaking about her experience because society doesn’t talk enough about miscarriage and child loss, despite the staggering statistics.

“54% of people have been through it or know someone who has been through it,” Kirby shares from her research for the role. “That very female experience just felt like something that was really important, and I’m really proud to be a small part of that conversation.”

Kirby hopes that this film will add to the growing conversation surrounding miscarriages, which have recently been illuminated by Teigen, who shared her heartbreaking story about suffering pregnancy loss while carrying her third child, and Markle, who penned a piece in November, revealing she had a miscarriage this summer. Earlier this week, “The Hills” star Whitney Port revealed she suffered her second miscarriage.

“I think it’s so brave of them to do so,” Kirby says about Teigen and Markle. “When I read the article that Meghan had written, I felt so connected to them somehow, and I felt so in awe of their bravery. Someone told me that the reaction to Chrissy was really mixed. Some people found it really hard and didn’t want to know about it, and that indicates it’s a subject that’s so hard to talk about.”

“From the women I spoke to, so many of them describe how lonely their experience is,” Kirby continues. “In sharing pain and sharing grief, when you feel totally alone, the act of sharing it or the act of someone reaching out or the act of someone saying, ‘I understand and I see you and I remember what it’s like and I know what it’s like,’ I think that’s why it’s so important that women like them speak up publicly. And I really hope this little movie, as difficult as it is to watch — because it is difficult, it’s the most difficult subject — I really hope that [it helps] one woman out there who feels left alone in their experience.”

Burstyn believes “Pieces of a Woman” represents the evolution of women that society has finally embraced, both on-screen and off.

“Of course, now, Hollywood has grown, along with how women have grown, both societally and personally and politically, so I think we’re moving, we’re improving, we’re growing,” Burstyn says. “It just always takes longer than we hope it would.”