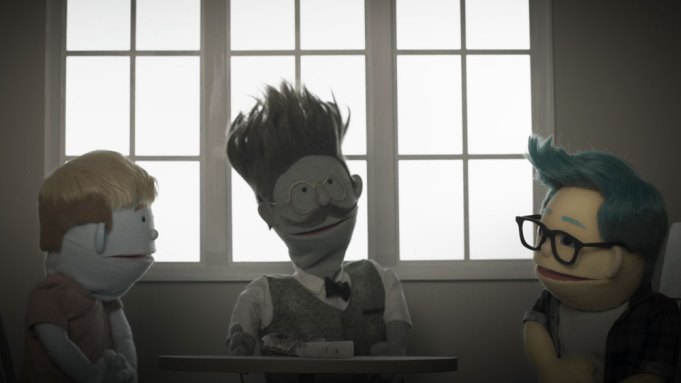 Told through puppets, “Bobby’s Big Problem” takes a comedic look at conversion therapy, satirizing the outdated ideas of gender and sexuality held by the people in charge of such programs. In the film, a young boy named Bobby (RB Butcher) is taken to a therapist (Patton Oswalt) by his mother (D’Arcy Carden), who claims she “just wants what’s best” for her son as he begins to experience same-sex attraction. Though the therapist swears he’s not practicing conversion therapy (“No, no, no, we can’t call it that anymore!”), what follows is a series of scenes where Bobby and a cute fellow patient must assert their masculinity in order to “become straight” — something the therapist achieves by beating up pillows with tennis rackets and lobbing footballs straight at Bobby’s eyes. Bobby explains the experience to his friend Renee (Jasika Nicole), who helps him realize that what he’s going through isn’t therapy at all.

Born Perfect was created by the National Center for Lesbian Rights (NCLR) in 2014 and fights conversion therapy by drafting laws to protect LGBTQ youth and raising awareness about the harms of the practice. According to their website, Born Perfect has helped passed legislation in 20 states and 85 cities and municipalities. The organization was co-founded by Mathew Shurka, a survivor of conversion therapy who has also consulted and advised on films that deal with conversation therapy, such as “Boy Erased,” “The Miseducation of Cameron Post” and “Pray Away.”

“Conversion therapy today doesn’t look like it did five years ago or even 18 months ago. Most of it now takes place in settings that look like “talk therapy” — whether that’s with a licensed therapist or a religious figure,” Shurka said. “With ‘Bobby’s Big Problem,’ we intended to make a difficult story lighter by using puppets. Conversion therapy is difficult to watch, but we hope by using puppets to show its absurdity, more people will be see our message — and in turn, understand what conversion therapy is and, hopefully, get help if they’ve unknowingly been under going this abuse.”

“I hope this short film, with its surplus of humor and heart, helps to start a conversation about a very serious, and ultimately heartless, practice,” Oswalt said.

“Bobby’s Big Problem” was produced in partnership with Enfranchisement Productions, a creative agency that focuses on contemporary social issues. Carly Usdin wrote and directed while Rudy Jansen served as producer. Watch the film above.