Paolo Sorrentino on Maradona, Fellini, and Getting Personal in ‘The Hand of God’ 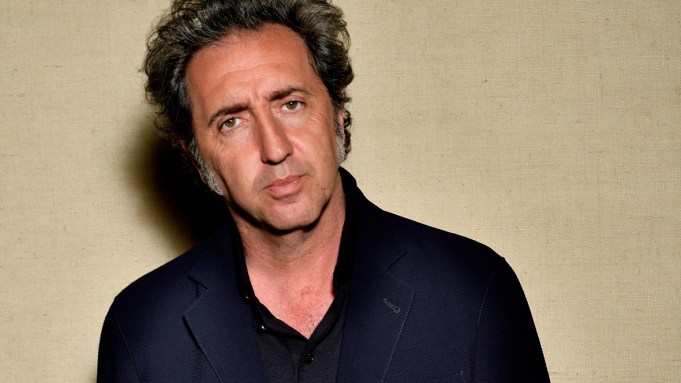 When Paolo Sorrentino was 16 he lost his parents in an accident involving the heating system in a mountain house where he always used to go to with them. But that weekend he didn’t go, because he wanted to watch his idol Diego Maradona and S.S.C Napoli play a soccer match in Tuscany. And that saved him. Having recently turned 50 amid the coronavirus lockdown, the Oscar-winning director of “The Great Beauty” decided he was “old enough” to tackle his autobiography. So after 20 years he returned to his native Naples to shoot “The Hand of God.”

This Netflix Original film, which world-premieres Thursday in Venice, is the story of a goofy kid named Fabietto who starts harboring a passion for filmmaking in the tumultuous Naples of the late 1980s. As Sorrentino puts it, “it’s a tale of destiny and family, of sport and cinema, love and loss.” Excerpts from the conversation follow.

Last time we spoke you’d just returned to Rome from L.A. due to the pandemic and you said you were going to take a break. What prompted you to make this movie instead?

It’s a film I’d been thinking about for a long time. But for a long time I also thought I wouldn’t shoot it and would use the screenplay –– which is the form of writing that is most congenial to me –– just to have my kids read it. I never thought I would find the courage to make this film, because it was very complicated emotionally for me. It meant returning to the scene of the crime, as it were. Then, with my U.S. projects on standby due to COVID, while I was in that lockdown bubble, I thought the upcoming summer would be a time of rebirth, so I thought: “Let’s see if I can shoot it.”

So it’s a somewhat therapeutic film.

Yes. I decided to make it because — like what happened with my other movies — themes that I was very passionate about, when I brought them to life within a film they sort of vanished from my memory. So I selfishly thought: if I make a film on these painful themes, once the film is done they might vanish. Just like other obsessions I’ve had over the years, like the one I had for [Giulio] Andreotti [the Italian politician depicted in “Il Divo”], or for the mafia. So I decided that there was really a strong emotional push to make the film. It’s hard to explain it rationally, I just thought: “This film needs to be done.”

You were ready, I guess.

I felt old enough. Having given a very important symbolic significance to the fact that I turned 50, I thought: “Maybe I’m old enough to tackle an autobiographical theme, to stop hiding behind characters like the pope, or Jep Gambardella in the “Great Beauty” and I can face this story head on. I also wanted to make a more simple movie [than my previous ones]. I think I had overdone it with some films that were too built, that were a bit overwrought. After 20 years of filmmaking I was perhaps a bit tired of the spot I was in. I wanted to start up again. This film, though it’s different, has the same approach as my first film “L’Uomo in Più,” which was very spontaneous, heartfelt, melancholy and painful — but also cheerful — just like this film, even though they are very different.

That film was set in Naples. How was it to be back shooting in Naples?

It was very pleasant. It had been years since I’d spent that much time there. I realized that Naples, for better or worse, is bursting with a vital energy that I rediscovered. The vitality of this city is something that was buried in my youth, which I had completely forgotten. And shooting there was easy for me because in this film I depict the Naples I knew as a kid; the places I knew as a kid. I didn’t have to face all the complexities of when you shoot in present-day Naples that is so complex and multifaceted and full of problems. I just put on screen everything I remembered from when I was born up until I was 24.

Maradona saved your life, but the film suggests he was also a role model of sorts for you as a film director?

Yes for me Maradona — besides being what he’s been for many of my generation in that city, a sort of strange divinity –– is someone who became what he became, despite everything and everyone. Despite his body not being the body of an athlete; despite a social background of extreme poverty. There is no direct analogy between us in this respect. But his perseverance, with all the due differences, was also my perseverance. I wanted to become a director, and if I look back there was nothing in my family background that pointed to that. I came from a family where there were very few books and very few ties to cinema.

Federico Fellini, who I think is also a big influence, is referred to in this film where your brother auditions for him. Is that real or made up?

No, it’s true. The fact is that my brother did an audition for Fellini in Naples. So one of the first fascinations I had with cinema certainly has to do with Fellini. My brother went to this casting call.

More in general, in telling your personal story, how much is real and how much is fiction?

The starting point were plenty of facts about my life, but then of course these in themselves don’t make up the plot of a film. So you need to build a fictional structure. I obviously did not limit myself to transposing bits of my life. I fictionalized, of course. But what I didn’t fictionalize, what I stayed true to — what I wanted to be authentic — was the feelings I felt as a kid: astonishment, joy, cheerfulness, pain, suffering, inadequacy, insecurity. The film is very close to my life, when it comes to what I was going through.

Speaking of casting, how did you find Filippo Scotti, who plays Fabietto?

I picked him in the most classic way, through casting calls. He seemed the one who reminded me of myself the most at his age. Quite shy, very introverted, always immersed in his thoughts, pretty goofy. At least that was the perception I had of myself at that age. He also just seemed like a very good actor.

Directing him wasn’t complicated because at the end of the day, even though it’s autobiographical, it’s still a movie. So I respected, in most cases, the dynamics of what happens on set with actors. But at times I did find myself particularly moved. I saw myself, and I hid. It’s obvious that this film is unlike the others I’ve made. There is a different level of engagement. It was more painful.

So, what’s next? It’s been reported you will direct a big biopic about famed talent agent Sue Mengers to be played by Jennifer Lawrence.

I can’t say anything, it’s still all talk. I don’t have any certainties on what I will be doing, I really don’t know, though I’d love to go back to L.A.