The Most Awkward Moments Backstage at the Oscars 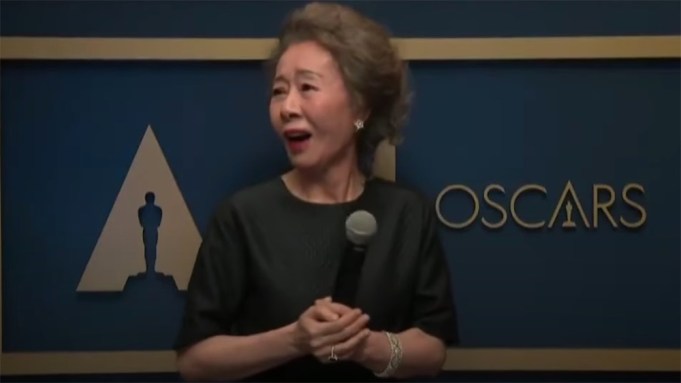 Most years, the Oscars media room is as intimate and pedestrian as an award show gets.

Agents and publicists drink warm diet coke and pound cocktail shrimp with the global press and a throng of photographers. Movie stars and filmmakers glide through, gossip is shared, Wi-Fi is terrible, a good time is had.

But as the pandemic has taught us all season long, no amount of planning or decorum is a match for the unbeatable foe of Zoom. Adhering to similar COVID-19 concessions as the live show,  the press was relegated to a virtual conference room. And, aside from Glenn Close’s “Da Butt” moment, this is where the majority of the gloriously uncomfortable award show moments occurred.

Despite noble efforts from the Academy of Motion Picture Arts and Sciences team, chaos reigned — from unmuted microphones to wardrobe malfunctions, empty chairs to mistaken identities. We will not name names (as there before the grace of God go us fellow journalists), but here are the most awkward moments from the 2021 Oscars media room:

A very patient Daniel Kaluuya was the first big star to hit the press room, which for talent manifested against a step-and-repeat with a microphone, squinting into the distance at what we imagine was a maximum of two computer monitors broadcasting Zoom. After campaigning for a second question from one earnest reporter, the best supporting actor winner took a final query from an international outlet.

That reporter asked him, “What was it like being directed by Regina?”

Cue one thousand palms smacking one thousand foreheads. Kaluuya, of course, won for his performance in “Judas and the Black Messiah,” directed by Shaka King. His fellow nominee, Leslie Odom Jr. of “One Night in Miami,” was directed by Regina King.

Professional on Top, Party on the Bottom

A very recognizable anchor for one of the top entertainment magazine shows was not unmuted after asking a question to an Oscar winner. To a captive audience, this person was overheard receiving a note from a producer — to put on black pants that would match their formalwear from the waist-up.

The anchor had time to change, considering…

Below the Line Snub

It’s no crime to come to the Oscars in search of stars. Celebrity-focused outlets have just as much right to celebrate Hollywood’s biggest night as anyone. Zoom did, however, lay bare some of their intentions. The same pants-changing anchor could be heard telling their producer, “I can put on black pants. All we have is time before anyone comes back that we want to talk to.”

A staggering number of reporters were not on camera when called on to ask their questions, including one household name from one of the major morning shows. Even on Oscar Sunday, the press is not immune to virtual workplace flubs. Similarly, nearly every single person called on asked talent, “Can you hear me?” The digital insecurity never dies.

Yuh-Jung Youn, whose graceful speech touched on her long career and the family built on “Minari,” mostly fielded questions about her award presenter Brad Pitt while backstage. One question was particularly odious to the best supporting actress winner, when asked what Pitt smelled like.