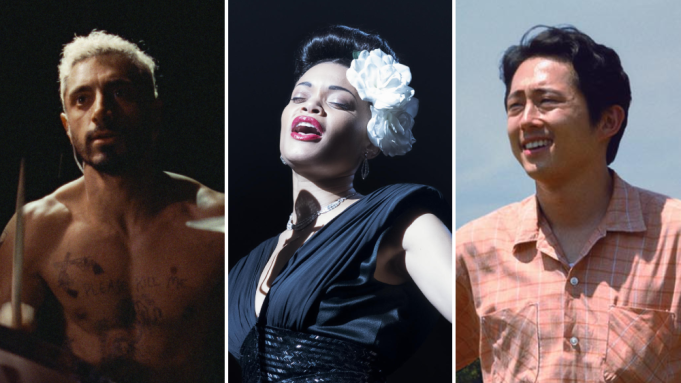 Courtesy of Amazon Studios; Hulu; A24

Nine actors of color earned Academy Award nominations on Monday, setting an Oscar record for diversity in those categories. The achievement comes after years of aggressive efforts by the Academy to diversify its membership in the wake of all-white acting nominees for the 2015 and 2016 ceremonies. That ignominious event was almost repeated last year when just one Black actor, “Harriet” star Cynthia Erivo, earned a nomination (for best actress).

Along with Chadwick Boseman (“Ma Rainey’s Black Bottom”), this is also the first time in Oscar history that the best actor category is not majority white.

Marking a sad milestone, Boseman is also the first actor of color ever to earn a posthumous Oscar nomination.

It was a watershed year for Oscars diversity beyond the acting categories as well. Chloé Zhao (“Nomadland”) became the first woman of color nominated for best director, and with fellow nominee Emerald Fennell (“Promising Young Woman”), this is the first year more than one woman has been nominated in this category.

With nominations for picture, director, film editing and adapted screenplay, Zhao is also the first woman ever to receive four nominations in a single year.

And “Judas and the Black Messiah” is the first movie with an all-Black producing team — Shaka King, Charles D. King and Ryan Coogler — to be nominated for best picture.

This year’s Oscar nominees follow a similar watershed year for the BAFTA Film Awards, which nominated its most diverse slate of actors ever after confronting its own #BAFTAsSoWhite scandal last year. As a result, BAFTA implemented 120 changes to its awards after a months-long review of the makeup of its membership and the voting procedures for its awards.

Neither of those figures, however, is close to the demographics for the general public. To further advance diversity and inclusion, AMPAS announced in September a new set of eligibility standards that will begin to be phased into the Oscars starting with next year’s awards. Those standards, however, only apply to the best picture category.

And although the acting slate for this year’s Oscars did break diversity records, the slate of best picture nominees was far less diverse. “Ma Rainey’s Black Bottom,” “Da 5 Bloods,” and “One Night in Miami” — all with predominantly Black casts — did not make the cut for best picture, despite all earning nominations for best ensemble for this year’s SAG Awards.

Indeed, the fact that it took until 2021 for the Academy Awards to recognize a widely heterogeneous array of nominees also speaks directly to the deeply entrenched prejudices that have kept people of color outside of the Oscars — and the film industry at large — for so long.

“We’re seeing notable gains for different communities, and it is important to celebrate that,” says Dr. Stacy L. Smith, of USC’s Annenberg inclusion Initiative. “There are still voices missing — for example, [‘One Night in Miami’ director] Regina King was left out of the directing nominations and few if any Latinx nominees were named this year — so there is room for the Academy to continue its efforts. We will continue to watch the nominations to ensure that a year of ‘firsts’ does not become a year of ‘only.'”

In speaking to Variety for February’s cover story on the Black women of awards season, Davis reflected on what awards recognition means to her — including becoming, with four nominations, the most honored Black actress in Oscars’ history.

“It’s another opportunity to open my mouth and speak a really fundamental truth about Hollywood and this business, and, really, America,” Davis said. “If me going back to the Oscars four times in 2021 makes me the most nominated Black actress in history, that’s a testament to the sheer lack of material there has been out there for artists of color.”

Angelique Jackson contributed to this report.