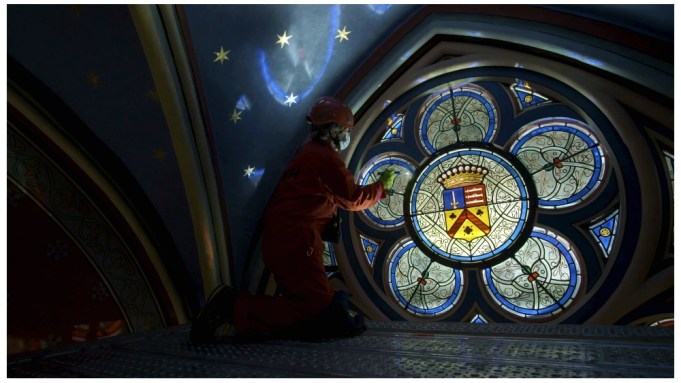 Two years after a devastating fire ripped through the Notre-Dame cathedral in Paris, French producer Christine Le Goff (“Sacred Spaces”) is preparing an ambitious three-part documentary series exploring how the 800-year-old landmark will be reconstructed and how it was originally built.

Titled “Raising Notre-Dame,” the documentary series was commissioned from Paris-based banner ZED by Arte and is being directed by Vincent Amouroux, whose credits include “Living Universe.” The project combines live footage with CGI visuals and rare historical archives. Le Goff, who previously produced “Decoding the Great Cathedrals” and “Sacred Spaces,” secured long-term access to all areas of the cathedral while it is being investigated before the start of restoration in 2022.

Le Goff said “Raising Notre-Dame” also enlisted the National Center of Scientific Research (CNRS) to gain exclusive access to the scientists and experts on site, as well as to the results of their studies, in order to deliver a close view of architectural details and materials.

“Notre-Dame is like a suffering human being surrounded by doctors, applying medicine, bandages and doing analysis to come up with a diagnosis,” said Le Goff. “This is the approach we chose to take: humanizing Notre-Dame.”

Since production started a couple years ago, many discoveries were made, including the surprising fact that Notre-Dame was wrapped in a ring of iron that was incrusted in the stone, most certainly to prevent it from collapsing. “It’s believed to have been the first time iron was used to build a Gothic monument in the 12th century,” said Le Goff.

The producer said the project was initially a 90-minute documentary for Arte but the wealth of material and research collected turned it into a much larger endeavor.

“We realized that we needed three hours to really dig deep into Notre-Dame and show the uniqueness of the cathedral, as well as understand the epic challenges raised by its original building, and the restoration that will start in about eight months — and underneath it all, the beauty that resides amid this chaos,” said Le Goff.

A jewel of France’s architectural and religious heritage, Notre-Dame received hundreds of millions of dollars from organizations and individuals, notably Kering boss François-Henri Pinault and LVMH Group CEO Bernard Arnault, to be rebuilt in the wake of the tragic fire that partly destroyed it.

“Since the Second World War, no Gothic cathedral of this magnitude has ever been rebuilt, so this series is not just about science or the history of architecture, it is about an extraordinary human effort,” said the producer.

In addition to the exclusive access to the cathedral and its surroundings, “Raising Notre-Dame” will also show the constitution of all the cathedral’s scans and data throughout time, as well as original photos, architectural plans and notes compiled during the 19th century, explained Le Goff. Several historical and scientific advisors are being interviewed for the documentary series, including Arnaud Timbert, professor of Medieval Art History, and Philippe Dillmann, member of the Notre-Dame Scientific Council.