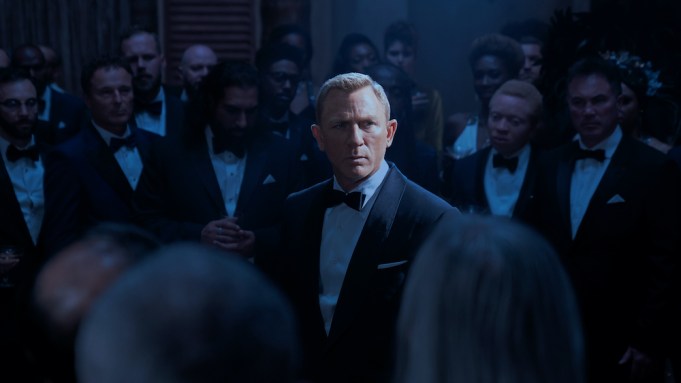 Though Daniel Craig’s final outing as James Bond won’t be one for box office record books, “No Time to Die” easily took the top spot in North America.

Directed by Cary Joji Fukunaga and co-starring Rami Malek, Lea Seydoux, Lashana Lynch and Ralph Fiennes, the latest 007 adventure debuted to $56 million over the weekend — a result that would have been more dazzling had the film not cost $250 million to produce and at least another $100 million to promote.

Despite opening slightly behind expectations, “No Time to Die” marks a positive step forward for the movie theater business, which has struggled to rebound from the pandemic. With Bond’s assist, the overall box office collected $108 million between Friday and Sunday, according to Comscore, marking only the fourth weekend in the past 18 months to cross the $100 million benchmark.

Box office experts predict that momentum from “No Time to Die” and Sony’s comic book sequel “Venom: Let There Be Carnage,” which smashed pandemic records earlier in October, portends an especially busy fall and winter at the movies, at least, by COVID-19 standards. The box office may continue to ebb and flow between weeks, but for the first time in nearly two years, there’s a steady stream of buzzy films on the schedule. Throughout the rest of October and early November, movie theater marquees will feature “Halloween Kills” with Jamie Lee Curtis, director Denis Villeneuve’s “Dune” remake and Marvel’s “Eternals.”

“Going forward, business will continue to build, but it will be uneven,” predicts David A. Gross, who runs the movie consulting firm Franchise Entertainment Research. “Three steps forward, two steps back.”

Hollywood hoped Bond, a long-running franchise that has always been particularly popular among older crowds, would bring those moviegoers back in a bigger way after lukewarm ticket sales for “The Sopranos” prequel “The Many Saints of Newark,” Clint Eastwood’s Western “Cry Macho,” the Jessica Chastain-led biopic “The Eyes of Tammy Faye” and other offerings intended to appeal to audiences who are less interested in superhero spectacles. Moreover, executives and theater operators were counting on “No Time to Die” to inspire people to return for numerous awards hopefuls on the calendar later in fall, such as Wes Anderson’s “The French Dispatch” and Pablo Larrain’s Princess Diana drama “Spencer.”

“No Time to Die” sold more tickets to moviegoers over 45 than any other pandemic-era movie, with 36% of ticket buyers over the age of 45 and 57% over 35. Yet the reality is that older audiences have been the most concerned about new variants of COVID-19 and, as a result, haven’t been as tempted to go to their local multiplex. Older audiences aren’t known to rush out on opening weekend, and reviews have been strong for “No Time to Die,” which could be a positive sign for the movie’s long-term prospects.

“Older and family audiences are unlikely to return to full strength before the pandemic is completely behind us,” Gross says.

There have been signs that may be improving, albeit slower than most would have liked. United Artists Releasing, the company distributing the film in the U.S., reported 25% of ticket buyers returned to theaters for the first time in more than 18 months for Bond.

When people have been going to cinemas, they have been opting to watch the latest blockbuster in the best quality possible. It makes sense, since box office charts have been led by spectacles that are filled with CGI and intricate action sequences. In the case of “No Time to Die,” premium large formats such as Imax, Dolby, 4DX and RealD contributed to 36% of overall ticket sales. Imax alone accounted for 13% of box office revenues with $7.3 million domestically, marking the company’s biggest debut since “Aquaman” opened in December of 2018.

“The combination of Imax technology and this iconic franchise has proven to be a winning one at the global box office, with audiences everywhere turning out to experience Cary Fukunaga’s immersive filmmaking as it was meant to be seen,” Megan Colligan, Imax Entertainment president, said in a statement. “Imax is reaching and even exceeding pre-pandemic global box office for September and October, which is a very exciting prospect given the upside ahead with audiences and blockbusters still returning to theaters.”

4. An October to remember?

Outside of Imax, moviegoing has hardly compared to pre-pandemic levels. Yet October, which isn’t a typically busy period at the box office, is shaping up to be stronger than historically lucrative summer months as audiences return to theaters. Thanks to the “Venom” sequel and “No Time to Die,” October has already outpaced May of 2021, the official start to summer blockbuster season, in overall ticket sales. It’s the first time, maybe ever, that has happened. Through its first 10 days, October has generated $269 million in receipts, while the entire month of May (which saw the release of “A Quiet Place Part II,” “Cruella” and hardly any other compelling titles) brought in $215 million. If “Halloween Kills” and “Dune” incentivize movie-watchers in droves, October could eclipse July ($583 million), August ($421 million) and June ($409 million) to become the biggest month of the year. Whether or not it breaks records, it marks a notable improvement on the first quarter of the year with lackluster turnouts in January ($64 million), February ($56 million) and March ($116 million).

“We are seeing numbers in October that we would normally see in the summer,” says Paul Dergarabedian, a senior media analyst with Comscore. “It’s going to be one of the more potent Octobers at the box office.”

5. James Bond may need to economize

With 25 popular movies across six decades, Bond has cemented its place as a film franchise with few rivals. The property was a cornerstone of Amazon’s $8.45 billion acquisition of MGM, the company that backs Bond. (Universal Pictures distributes Bond internationally.) That means although Craig has retired his black tux and signature martini, it’ll hardly be the last that audiences see of the coveted spy series. Though no upcoming projects have been announced, the Bond overlords are likely taking a hard look at how much money they will pump into the next 007 outing — whether on the big or small screen.

For “No Time to Die,” $56 million to start is somewhat disappointing because it carries an enormous budget and will need to gross at least $800 million globally to get out of the red (probably closer to $900 million). Box office experts predict the film will complete its domestic run with approximately $150 million, considerably short of its franchise predecessors, 2012’s “Skyfall” ($300 million) and 2015’s “Spectre” ($200 million). In that case, “No Time to Die” will need to generate significant coinage at international box office, where it’s already amassed a strong $145 million. It has yet to open in China (set for Oct. 29), which is a popular market for Bond. “No Time to Die” has grossed $313 million to date and may struggle to break even, at least in its theatrical run.

“I don’t know that a future Bond property will have the same unique budgetary stressors this film had,” says Dergarabedian, referring to the tens of millions the studio had to spend delaying the movie due to the pandemic. “It takes a lot to offset those kind of costs. But audiences expect a certain level of production value from James Bond.”

It’s true that Bond has become synonymous with extravagance, but there should be ways to reduce costs — and still deliver on style — to assure an easier path to profitability. May we recommend leasing the Aston Martin?