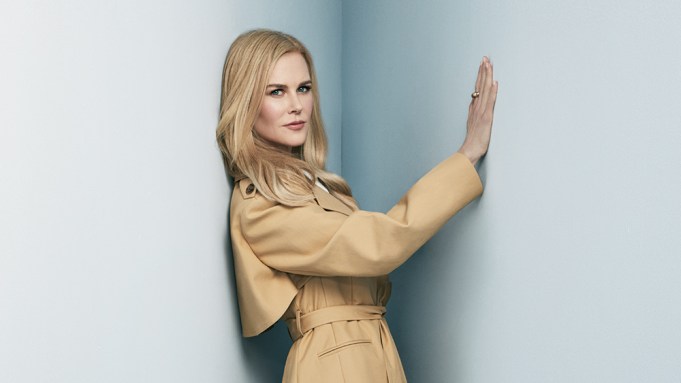 In “The Undoing,” Kidman stars as Grace, an Upper East Side therapist whose life unravels when her husband (Hugh Grant) is accused of a grisly murder. Sutherland plays Kidman’s wealthy, stoic father.

In one of the hit HBO series’ most powerful scenes, Kidman and Sutherland discuss Grace’s mother while playing the piano together in the patriarch’s apartment. “That was actually not set at a piano,” Kidman tells me on this week’s extra episode of the Variety and iHeart podcast “The Big Ticket.” “There was no mention of the mother. All of that was just the layers of a backstory that was coming to fruition that Donald and I shared and therefore turned into a scene, where I’m sitting at a piano and that reminds me of my mother. … The scene I think was set on a couch and there was no mention of a mother.”

“That man can act,” Kidman says of working opposite the 85-year-old acting giant. “He just comes in and his wealth of experience and knowledge and talent is in abundance.”

I caught up with Kidman from her home in Australia, where she’s been spending time with her 80-year-old mother, Janelle. The night before we talked, she and husband Keith Urban took their daughters to grandma’s to watch “Call of the Wild.” “She’s a good mama, and she makes me cry,” Kidman says. “It’s great to be able to be here. We’ve not been here for so long.”

They also recently took her to see “The Merry Widow” at the Sydney Opera House, where the audience was kept at 50% capacity. “She hadn’t been out to anything in well over a year,” Kidman says. “And the power of being in that auditorium, listening to these opera singers and the joy that was in the room, it’s the power of the arts and the love that spreads and how important that is.”

Kidman says she’s taking a couple of months off following a busy year, despite the pandemic. She not only starred in and promoted “The Undoing,” but she also shot the epic Viking drama “The Northman” — Robert Eggers’ follow-up to “The Lighthouse” — as well David E. Kelley’s “Nine Perfect Strangers” for Hulu.

Shooting “The Undoing” not only allowed her to work with Grant for the first time, but also with director Susanne Bier. “With [Bier], she has her finger in every part of it,” Kidman says. “It’s basically an auteur, where she’s able to see everything, be involved in everything, an extraordinary ability to believe in her own judgment and what she wants and how she wants it, and that is a filmmaker unabashedly and she’s willing to live and die on that vision.”

Despite Kidman’s success, she insists she’s still finding her voice. “I’m hoping I haven’t done my best work,” she says. “I’m hoping I get to experience more extraordinary creative alliances and times with people.”

Part of realizing those goals is taking some unexpected projects. “I’m willing to go and work on something that’s got a really, really low budget and doesn’t have the money to pay you and just get in there and do it. It’s why I do things like ‘Destroyer,’” she says. “When I went to Belfast [for ‘The Northman’], I was pretty scared. People were saying, ‘Oh my God, if you go, you’re going to get COVID.’ So I was really frightened, but at the same time, I had this sense of duty and I had this sense of ‘this is what I do.’ I’m a creative being who shows up and I put on as much protection as I could and so I did the production and we were all safe and I went, ‘OK, let’s go.’”

It was announced earlier this month that Kidman will star as Lucille Ball opposite Javier Bardem in “Being the Ricardos,” Aaron Sorkin’s drama about one week during the making of an episode of “I Love Lucy.” “I was like, ‘Yeah, I would love to give it a go,’” Kidman says. “With Aaron’s words and his direction and Javier … that’s kind of a wonderful prospect to, you know. But yikes, off we go. Give it a go. Try my best — see if I can do it.”

She’s been watching a lot of “I Love Lucy.” “I love Lucille, having looked now and delved into her,” Kidman says. “She’s an amazing woman. I’m very excited for people to see what Aaron found out about her and the way he’s interpreted Desi and Lucy and the way that it’s so rich. I didn’t know any of this.”

One role that she always wanted to play, but never got the chance? Nina in “The Seagull.” “It was one of my biggest desires,” Kidman says. “To any of the young actresses out there — if you have the chance to play her, play her!”

“But I played her in my head and I definitely played her in my bedroom,” she adds, laughing. “Right? It passes you by. We all have it. There is something to be said for just as an actor being able to go, ‘OK, I’ve kind of done it in my own little bubble.’”

Hear the full interview with Kidman above. You can also listen to “The Big Ticket” at iHeartRadio or wherever you download you favorite podcasts.