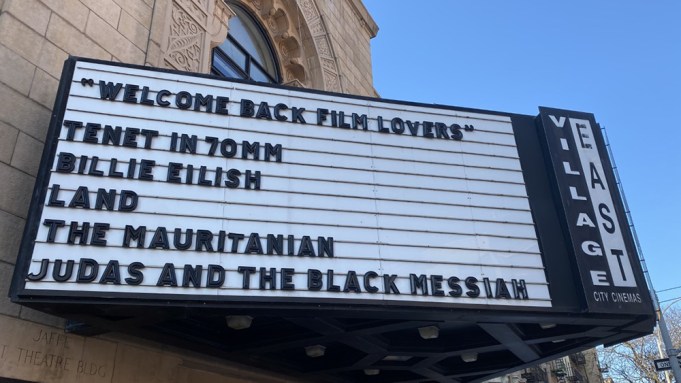 Movie theaters in New York City will soon be able to welcome a slightly larger number of customers into their venues.

New York Gov. Andrew Cuomo has given local cinemas permission to operate at 33% capacity, starting on April 26. At the same time, museums and zoos will be able to increase to 50% capacity. In a tweet on Monday, Cuomo emphasized that other pandemic safety precautions, including social distancing and enhanced cleaning protocols, will remain in place.

The announcement represents a positive step forward for moviegoing, which is a sector of the entertainment industry that has been crushed by the pandemic. While many theaters in the city were able to reopen in early March, some opted to remain shuttered, fearing it would not be profitable to resume operations with the state’s restrictions on attendance. As capacity limitations continue to lift, those cinema operators may find it more financially realistic to turn the lights back on.

With more theaters open in New York City and Los Angeles (which recently increased indoor capacity to 50% or 200 people), Hollywood studios could feel more inclined to keep release dates for summer movies, including Paramount’s “A Quiet Place Part II” (May 28), Disney’s “Cruella” with Emma Stone (May 28), Universal’s “Fast and Furious” sequel “F9” (June 25), and Disney and Marvel’s “Black Widow” (July 9). Both “Cruella” and “Black Widow” will be released simultaneously on Disney Plus for a premium charge.

One source of encouragement has been the release of “Godzilla vs. Kong,” a tentpole from Warner Bros. and Legendary that envisions a battle royale between two of cinema’s legendary monsters. The film, which is currently available to stream on HBO Max, has crossed $80 million at the domestic box office, making it the top earner of the COVID-19 era. It’s expected to be the first movie since the pandemic hit to surpass the coveted $100 million mark.

Also on Monday, Alamo Drafthouse announced that tickets for its Brooklyn location would go on sale starting April 26 for a May 7 opening, with distanced seating and a smaller food menu.