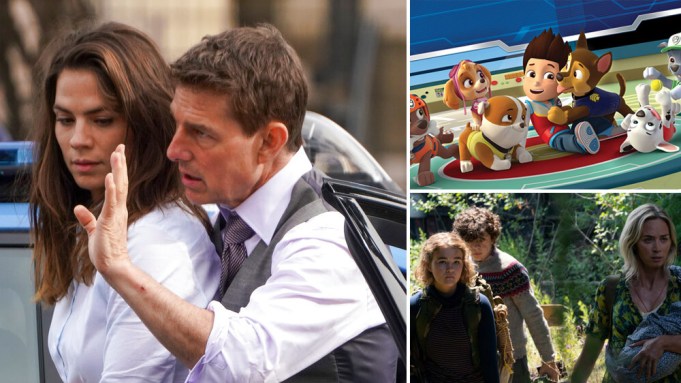 Paramount Pictures is entering the streaming era in a big way, one that will see the 108-year old studio overhaul the way it releases and licenses the movies it makes.

As part of that effort, Paramount will substantially shrink the amount of time its films are in theaters. At the same time, the studio has adjusted its pay TV output deal with Epix in order to provide thousands of movie titles to the nascent Paramount Plus streamer.

In conjunction with ViacomCBS’ investor presentation today, Paramount Pictures will disclose that it is experimenting with a shorter exclusive exhibition window for theatrical releases. Instead of the traditional 90 days between theatrical release and the first home entertainment availability, Paramount will look to a 30-day frame for most titles and a 45-day theatrical window for tentpole titles including the upcoming “Top Gun: Maverick.” That’s in keeping with moves by rival studios to shakeup the status quo of the three-month wait that has frustrated studio leaders for so long.

Moreover, to help give some sizzle to the March 4 debut of Paramount Plus, a rebrand and expansion of the CBS All Access streaming service, Paramount plans to have two of its high-wattage titles — “Mission: Impossible 7” and “A Quiet Place Part II” — premiere on Paramount Plus after the 45-day theatrical release window.

“Audiences are changing in their habits and we want to make sure that these films are available when they’re fresh after a full theatrical run,” Paramount Pictures CEO Jim Gianopulos told Variety.

Paramount Plus will also have exclusive streaming rights to the Nickelodeon-branded movie “Paw Patrol” following its theatrical debut on Aug. 20.

The moves made during the past few months were designed to preserve the theatrical experience but also set Paramount Plus up for a strong launch on March 4, ViacomCBS president-CEO Bob Bakish told Variety.

“We think this is an excellent investment on the company’s part. We are creating a very compelling service for a broad base of consumers: families with kids, movie lovers, sports lovers,” Bakish said. “To see a movie on a 100-foot screen is a great experience for event pictures. And to be able to put our titles on our own streaming service has incredible value.”

By the summer, Paramount Plus should have upwards of 2,500 movie titles available to subscribers. These include library titles that are currently licensed to Epix, along with films from other studios such as MGM and Sony that appear on the cable channel. Miramax films will be on the service thanks to Paramount’s 2020 decision to buy a stake in the indie studio behind “Shakespeare in Love” and “Pulp Fiction.” The new pact with Epix enables Paramount Plus to have access to other hit franchises such as MGM’s James Bond library, despite the fact that those movies were produced by other studios. The result is a much more robust offering of hot film titles than Wall Street and Hollywood initially expected.

“The service carries the Paramount name and that brand is synonymous with over a century of filmed entertainment that has given audiences a certain expectation for great films,” said Gianopulos. “We want to make sure we deliver on that.”

In select cases, Paramount titles will head to the streamer before they premiere on Epix. As for original production, Paramount Pictures will also deliver to its namesake streamer a new “Paranormal Activity” film and a “Pet Sematary” prequel.  In addition, Paramount will premiere “The In Between,” a supernatural thriller from “Chumscrubber” director Aries Posin, on the service. Going forward, Paramount expects to make between four to six original films for the service, many of which will be developed by Paramount Players, the studio division that backs genre and youth-oriented films.

The moves reflect the studio’s adjusted agreement with pay TV channel Epix, which has been the pay TV home of Paramount Pictures titles for the past 11 years. ViacomCBS has extended its Epix pact by one year, covering theatrical titles released through the end of 2023. In exchange, the studio gained a great deal of flexibility in windowing titles.

Paramount is taking a different approach from other studios. Warner Bros. is releasing its entire 2021 theatrical slate on HBO Max at the same time the films debut in theaters, which it has argued is a concession to the COVID-19 pandemic. Universal is deploying its own hybrid model, striking a deal with theater chains like AMC and Cinemark that enables the studio to debut its films on premium video on-demand within 17 days of theatrical premiere.

Paramount Pictures’ unveiling of its windowing shifts come as part of ViacomCBS’s presentation to investors about how it plans to differentiate Paramount Plus from the wave of new streaming offerings. The competition to take on Netflix has grown more pitched in recent months as Disney Plus, Peacock, HBO Max and others have all entered the fray. Paramount Plus’s origins date back to CBS All Access, which launched in 2014 and attracted some 8 million subscribers. ViacomCBS leaders believe the Paramount moniker enjoys broader global awareness than CBS does, hence the rebranding. However, the film studio wasn’t originally seen as a big pillar to supply content to Paramount Plus.

In the weeks leading up to the relaunch, there’s been a concerted effort to refocus on Paramount Pictures and reestablish the importance of movies for streaming services. It has resulted in a mad dash to close deals, renegotiate contracts and shorten widows on licensing fees.

Bakish disputed any suggestion of a scramble. He noted that CBS All Access began experimenting with movies last summer when it added about 300 titles last summer. It was clear early on that movies were sticky for All Access subscribers.

“We saw so much engagement that we knew that our film product matters,” Bakish said. “We always intended to have a big offering.”

The Epix agreement bolsters Paramount Plus’ film offerings substantially. Comparatively, HBO Max had approximately 2,000 films available at launch, Disney Plus kicked off with roughly 500 films and Netflix had 925 films ready to rent. Amazon Prime Video, which launched in 2006, has the biggest library by far with more than 13,000 movies and TV shows. Netflix currently houses about 4,000, while Disney Plus, Hulu and Peacock Premium each have approximately 600 to 800 movies that are cycled through.

“The true success of a streaming service is can a viewer find something that meets their taste, their preference, their mood at any moment of time across a variety of genres?” Gianopulos said. “If you can deliver that, that makes for a satisfied film viewer.”

Months ago there were internal conversations about using a splashy title like “A Quiet Place Part II” to coincide with the debut of Paramount Plus. But that idea was not embraced by the studio, which preferred to stick to a theatrical release strategy for the film even after Disney Plus and HBO Max generated buzz for the Christmas Day debuts of “Soul” and “Wonder Woman 1984,” respectively. None of the films premiering on Paramount Plus have that kind of broad appeal. For the most part, Paramount has opted to release its upcoming blockbusters in theaters, delaying many movies until later in 2021 or 2022 in the hopes of outrunning the pandemic.

During coronavirus, Paramount has sold several films to streaming rivals, such as “Without Remorse” and “The Trial of the Chicago 7.” At one point, “Coming 2 America,” the Eddie Murphy and Arsenio Hall comedy that was sold to Amazon Prime in November, was thought to have been a possible candidate to debut on Paramount Plus. However, the service didn’t come up with a deal that was as attractive as the $125 million that Amazon shelled out for the comedy. Gianopulos acknowledged that there were discussions about selling some of these films to Paramount Plus, but the service wasn’t ready to make the move.

“It was a little early for Paramount Plus,” he said. “The timing wasn’t quite right. I think going forward you would see some decisions made differently if films go directly to a service.”

Rebecca Rubin contributed to this report.