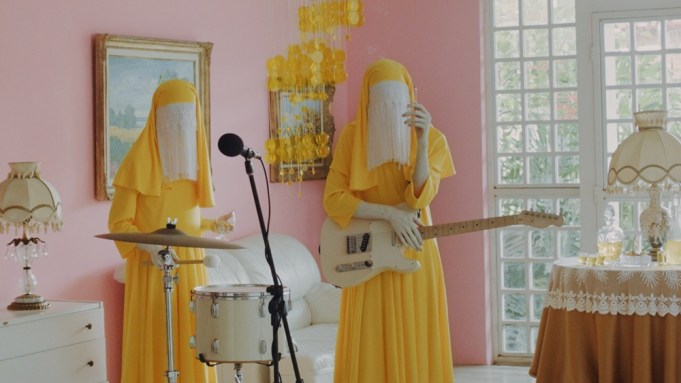 Having been made quite independently, those plaudits allowed the film to be completed. After its world premiere, it will return to Argentina to compete at the Mar del Plata Festival in the event’s main Latin American section.

The film follows Andrés Bravo, a guitarist and singer who starts his solo career after leaving his band Los Pijamistas when they agree to play at Suena Caracas 2016, a propaganda festival organized by Nicolás Maduro. His emotional world rocked as Venezuela’s social crisis rages on, Andrés will come to be accompanied by two mysterious characters clad in yellow: the Beasts.

The trailer underscores Manzano’s highly singular aesthetics – seen before in his short “Sexy Bicycle: Mesmerizing Gun”: A colorful, bright palette and a highly minimalistic approach in composition. Playful in his visuals, Manzano belongs to a filmmaking generation that, while constantly confronted by Latin America’s bracing realities, goes beyond a gritty realism to reshape context in colorful fictions.

“Me and the Beasts” is produced by Linterna Studio, a company founded by Ricardo Espinoza, Alan Ohep and Manzano, who also serves as DP on the film. It marks Linterna’s jump into cinema after producing multiple music videos and stop motion animation pieces.

“We were totally seduced by the suggestive and unique universe that Nico has been able to create with so few elements, by the portrait of the hopes, fears and illusions of Venezuelan youth seen from a rabidly original perspective,” said Renart.

He added: “It was a long negotiation, as the film had many suitors, but we are very happy to announce its addition to the Bendita catalog and eager to introduce it to our distributors.”