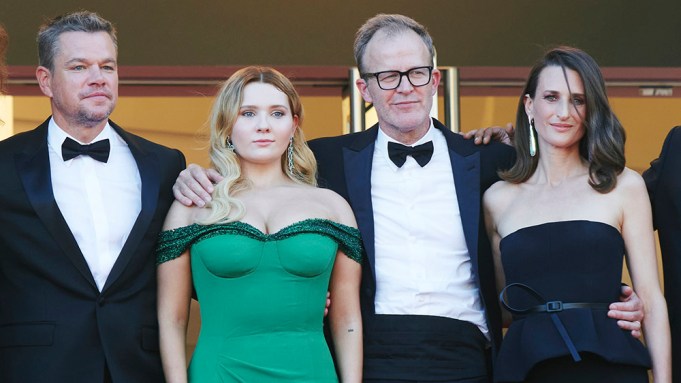 A return to Cannes made Matt Damon misty. The 50-year-old actor swooped into the Cannes Film Festival on Thursday night with “Stillwater,” a Focus Features drama directed by “Spotlight’s” Tom McCarthy.

As the credits rolled, Damon started to tear up at the ecstatic cheers from the crowd. In the film, he plays a stoic Oklahoma construction worker whose daughter (Abigail Breslin) is imprisoned for murder in France, after being convicted of killing her ex-girlfriend while studying abroad. As years and expensive lawyers add up (in a scenario reminiscent of the Amanda Knox case), Damon’s character Bill Baker works tirelessly to prove his child’s innocence and befriends a single mom (Camille Cottin) and her daughter (Lilou Siauvaud) along the way.

Matt Damon is brought to tears at the #Cannes2021 standing ovation for ‘Stillwater.’ pic.twitter.com/phpK2mOJT1

Damon took his time entering the theater, as he posed for seflies with fans and signed autographs. Prior to the film beginning, he lifted up his phone to record the audiences’ standing ovation as he entered the theater.

Once the film ended, he received another standing ovation — the audience clapped for another five minutes for Damon and his co-stars.

While filmmakers don’t typically give speeches following their Cannes premieres, McCarthy broke with tradition and was handed a mic after “Stillwater” ended.

“I’m overwhelmed to be here, I’ve been so greatly influenced by the cinema of this country and of Europe,” McCarthy said. “It’s so inspiring to present a film to this amazing audience in this iconic theater … that’s all I can come up with in this instant-tradition moment,” he added.

A mini star was born in newcomer Siauvaud, who plays a surrogate daughter to Damon in the dramatic thriller. Their on-screen chemistry played huge with the audience, only magnified when the actors embraced in theater after credits rolled.

Is it too early to start to handicap next year’s Oscars race? The consensus on the ground in Cannes was that Damon could earn his fourth Academy Award acting nomination — following “The Martian” (2015), “Invictus” (2009) and “”Good Will Hunting” (1997) — for playing Baker, a role where he’s required to carry nearly every scene in the film.

After a pandemic hiatus, the 74th edition of Cannes this week marked a poignant reunion of the global film community. Tuesday night’s opening night film, “Annette,” starring Adam Driver and Marion Cotillard, led to a four-minute standing ovation, that also seemed to be a celebration for the return of Cannes. Other festival highlights to come include Wes Anderson’s “The French Dispatch,” Sean Baker’s “Red Rocket” and Paul Verhoeven’s “Benedetta.”

While the industry, talent and media seem awestruck that the festival managed to be mounted at all, COVID-19 protocols have made for lots of chatter on the ground.

“Stillwater” opens in the United States on July 30.