How ‘Eternals’ Establishes the MCU’s First Gay Superhero and Same-Sex Couple in a Movie: ‘It’s Life-Saving’ 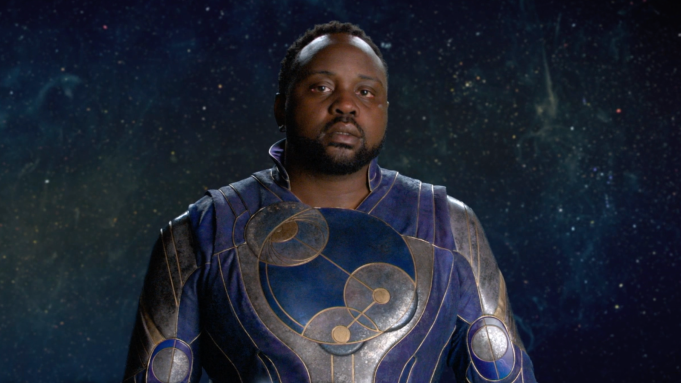 SPOILER WARNING: This story discusses a single scene in Marvel Studios’ “Eternals,” which opens in theaters on Nov. 5.

At the world premiere for Marvel Studios’ “Eternals” on Oct. 18, Haaz Sleiman was beaming. The 45-year-old actor, who came out as gay in 2017, could scarcely believe he was on the red carpet for a massive studio movie in which his character, Ben, is the husband of one of the title superheroes, Phastos (Brian Tyree Henry).

It marks the first time a Marvel Studios film has showcased a same-sex couple — and one of the only times any superhero movie has included a title LGBTQ character. In a pop-culture landscape that has been dominated worldwide by superhero storytelling for over a decade, the impact that representation could have for the film’s expected global audience was very much on Sleiman’s mind.

“Beyond a dream come true, it’s life-saving,” the actor told Variety. “I wish I had that when I was a kid to see this. My god. I wish! Can you imagine how many lives this is going to be saving — kids, young queer folk, who are being bullied, committing suicide, and not seeing themselves being represented? And now they get to see this — it’s above and beyond.”

The day after the premiere, director Chloé Zhao explained that Phastos’ husband and family were already baked into Marvel Studios’ conception of the character when she first began discussing making the film with the studio. She was especially taken with the idea that Phastos — an ageless alien who came to Earth 7,000 years ago to help guide human civilization through his powers of invention — rediscovers his long lost faith in humanity through finding Ben and starting a family. It helped the filmmaker see a way to walk the line between emotionally grounded storytelling and breaking a long overdue barrier for LGBTQ representation.

“What’s important is to show that it isn’t about a message we’re trying to put out,” Zhao said. “I think finding authenticity in moments like that is crucial for me, so it doesn’t feel forced, so you could actually relate to them. That’s the most important thing. It’s not just about being the first. It’s about do you actually feel for them, whether you’re gay or straight or whatever.”

(There have been other LGBTQ characters in movies and TV shows based on Marvel comics — including the lesbian couple Negasonic Teenage Warhead and Yukio in 2018’s “Deadpool 2” and the amoral lawyer Jeri Hogarth on the Netflix series “Jessica Jones” — but none were produced by Marvel Studios.)

Zhao gives a great deal of credit to Henry for bringing that “level of authenticity” to the role and helping to fill out who Phastos is well beyond how he was defined in the script.

“He would show up, and, like, even the powers he’s doing, he came up with all these hand gestures,” she said. “That wasn’t me. The way he speaks to his son, that dynamic, the jokes they have between them — a lot of them are improvised.”

Henry, who is currently in production on the FX on Hulu limited series “Class of ’09,” has not participated in almost any interviews for “Eternals,” but he did discuss the profound effect the role had on him in an extended and emotional moment during the press conference for the movie on Oct. 18.

“I remember when I was coming to this project that I, Brian, had kind of lost faith in humanity, just looking at all the things that we’ve been through and just what the images of Black men were and how we’re being portrayed and how the power was taken from us, the lack of power or feeling powerful,” Henry said. “What I really loved the most about Phastos is that through all of that — him being eternal, him never being able to die — he still chose love. He still decided to have a family, even though he may have to watch them perish. He still tried to find a way to bring heart and love to everything he did, even though his genius was used against him. It just really resonated a lot with how I felt my place in society was. How we can be kings and queens, and at the same time, they’ll take our pedestal and take our superpowers from us like that. So what I love the most about ‘Eternals’ is that Chloe and [producer] Nate [Moore] just re-instilled that power back in me again.”

There have been other recent, purportedly groundbreaking LGBTQ moments in major tentpole studio films — John Cho’s Sulu in 2016’s “Star Trek Beyond,” Josh Gad’s LeFou in 2017’s live-action “Beauty and the Beast,” Rosie Perez’s Renee Montoya in 2020’s “Birds of Prey” — in which the character’s sexuality is barely expressed on screen, if at all. So it was also critical for Zhao that Phastos and Ben have a moment of genuine, physical love between them, presented as a passionate kiss before Phastos leaves his family to go save the world.

In her quest for authenticity, Zhao said that she barely gave any direction to Henry and Sleiman for the scene.

“It’s up to the two of them to figure out what what that moment meant, how it should be,” she said. “I’ll explain what the situation is. That’s how I like to work with actors. But they’ve created, I believe, each of my actors, this big narrative of their character leading up to that moment. We can talk forever about it, but it’s important to have space on set to let the human part, not the actor part, to come out. And in order to do that, I have to step back. I just need to navigate it and nudge it. And if you work with an actor that doesn’t quite feel comfortable giving you that, you have to do a bit more. But Brian was exceptionally brave. I know it was scary. It was not easy. But he knows how important it was.”

She smiled. “And it was worth it,” she said. “We all felt something when we were there.”

The audience at the premiere felt it too, breaking into spontaneous applause during the actors’ embrace.

“I’m just — I’m happy for Brian,” Zhao said when asked about the reaction. “Happy for everyone involved. And happy for all the people who are going to see this. You know, people who not necessarily [are] like Brian, but just feel a moment of true human connection and it just happens to be of the same sex.”

While Henry did not address Phastos’ sexuality directly during the “Eternals” press conference, he did speak to how Marvel first approached him for the role — and what it meant to him.

“I remember the first time that they were like, ‘We want you to be a superhero,’ and I was like, ‘Cool. How much weight do I have to lose?'” Henry said. “And Chloé was like, ‘What are you talking about? We want you exactly as you are.’ To be a Black man, to have someone look at you and say, ‘We want you exactly the way you are,’ is unlike anything that I’ve ever felt. It just triggered me to be an 11-year-old kid who is watching these superhero movies, and not ever seeing anyone like me reflected. And how I would take these posters and put them in my locker, and just hope that one day there will be somebody representing me, in the way you know that I am. And I truly believe that that moment started when I sat down with Chloé. It’s unlike any feeling I’ve ever experienced.”

Angelique Jackson and Marc Malkin contributed to this story.