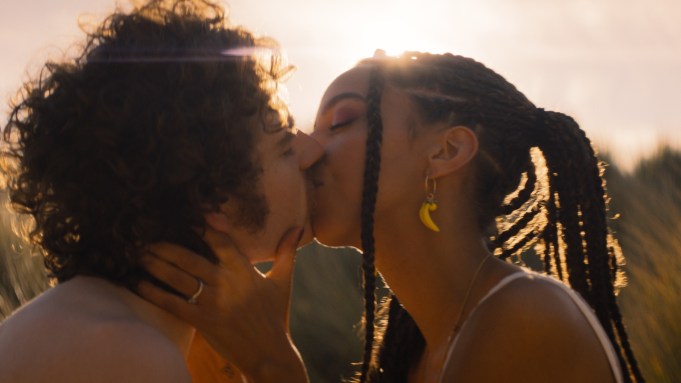 A young couple ponders life’s biggest questions of vows, adulthood, love and … “would you ever consider an open thing?” Check out the exclusive trailer debut for the charming romantic comedy “Mark, Mary & Some Other People” above.

Hayley Law and Ben Rosenfield play the titular characters who reconnect after college. The duo begins dating and winds up swiftly falling in love and getting hitched (according to the trailer and by “Eastbound & Down’s” Steve Little no less!). As their whirlwind love story moves forward Mary suggests the possibility of exploring ethical non-monogamy. The decision changes things for the couple and opens a lot of personal questions for both as Mary starts to realize she’s more traditional than she thought whereas Mark starts to open up and see the world differently through Mary and a polyamorous lens.

Written and directed by Hannah Marks, the director was excited to film in her hometown. “[We filmed] all over Los Angeles,” Marks told Variety. “I grew up in the valley and a lot of my friends are proud valley kids, valley rats…So few projects actually shoot in LA especially with the tax incentives everywhere else. It felt like a challenge but also really exciting to film places that we like to go.”

Thankfully shooting for “Mark, Mary & Some Other People” began at the tail end of 2019, before the start of the pandemic, finding time in the break between Thanksgiving and Christmas of 2019. “It was kind of a rush to try and get everything done before the New Year,” the director explained.

Inspired by past improv and mumblecore films, improvisation and risk-taking was important on set. In fact, neither leads had to audition or film a chemistry read before shooting. Impressed by Rosenfield’s past work on “Boardwalk Empire” and in “6 Years” along with Law’s work in the film “Spontaneous,” that was all the director needed. “We just went for it,” Marks said. “It was a very fast process, low budget and experimental. Just go, go, go, go.”

As for the subject material, it’s something Marks wanted to explore from the POV of her characters. “There’s part of me that’s more traditional and there’s a part of me that’s maybe more experimental and progressive. I thought it was an interesting way to explore those two sides of myself but through two different characters and create a rom-com out of that…Hopefully it’s opening the door to conversations about ethical non-monogamy and open relationships. But by no means do I want to portray this as the only way you can pursue that type of relationship, this is just one particular relationship. I hope people see it as a character study that they find funny, entertaining and truthful. But I definitely don’t want it to be portrayed as this is everyone’s experience with it because it’s just this particular couples experience with it.”

“Mark, Mary & Some Other People” had its first big premiere at the 2021 Tribeca Festival. Variety reviewer Nick Schager called the film a “spry rom-com” and even claimed the opening moments were perhaps “one of the strangest meet cutes in recent memory.” Read the full review here.

“Mark, Mary & Some Other People” premieres in theater and on demand Nov. 5th.