‘Luca’: All the Hidden Easter Eggs in Pixar’s Latest

Pixar’s “Luca,” now streaming on Disney Plus, is the story of two teenage boys having a carefree summer at the Italian seaside — but they just happen to be sea monsters.

Speaking with Variety, production designer Daniela Strijleva teased that the animated feature, in true Pixar style, is filled with Easter eggs galore. Sharp-eyed audiences should look for teasers of “Turning Red,” Pixar’s next feature. Viewers should also note that the street names pay homage to famous Italian filmmakers and authors.

“We had lots of fun in the graphic design,” says Strijleva.

Here are a few that we spotted — and yes, the famous Pizza Planet truck is also hidden in the film, in the form of a Piaggio Ape vehicle.

Remember Abuelita in 2017’s “Coco”? Here’s a boat that both Luca (Jacob Tremblay) and Alberto (Jack Dylan Grazer) spot while in the sea. The boat’s name, Elena, is a subtle nod to Abuelita, whose name was Elena.

Spot the poster to Disney’s “20,000 Leagues Under the Sea” as Luca looks around the piazza for the first time. The film opened in 1954, and a poster for the classic hangs alongside a “Roman Holiday” poster. 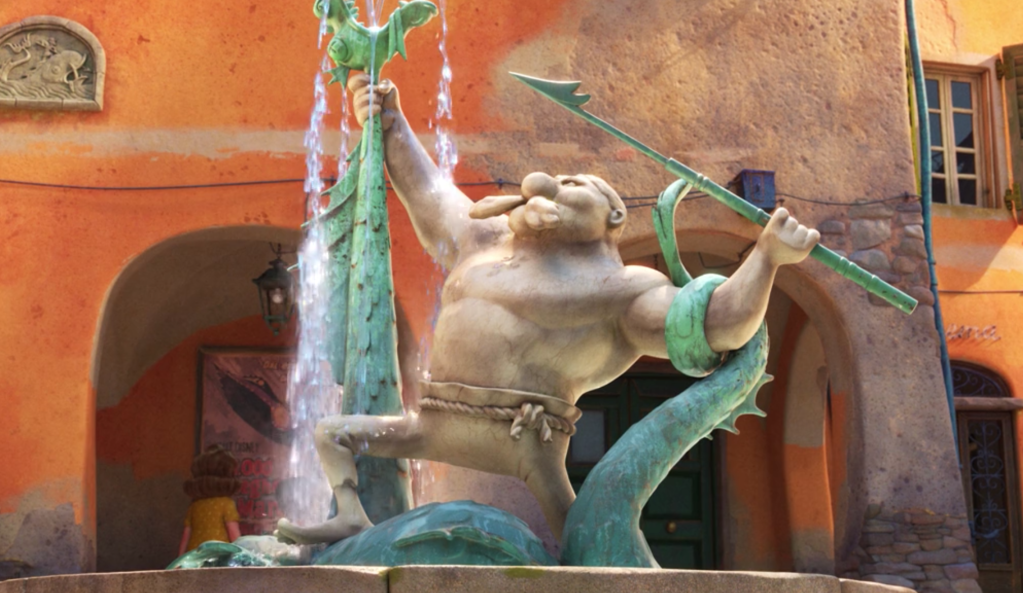 Once ashore and in human form, the boys meet Giulia (voiced by Emma Berman). She’s a feisty local who wants to join the boys in a race. If they win, they get enough prize money to buy a Vespa and go on their dream trip. Giulia’s bedroom is filled with Disney-themed references. There’s a stuffed Donald Duck by her bed. There is also an original book of “Le Avventure di Pinocchio” by Carlo Collodi, which the 1940 animated feature was based on.

You’ll find the Pixar Ball as the boys race through town toward the end of the movie. The famous Luxo ball is on a rooftop. This Easter egg is a Pixar favorite.

No Pixar film is complete without the famous A113 easter egg. Pronounced A1-13, A113 refers to the classroom number used by character animation students at California Institute of the Arts. In “Luca,” the number appears on the train ticket Alberto gives to Luca.