Lin-Manuel Miranda on Premiering ‘In the Heights’ in Washington Heights: ‘You Can Hear the Mister Softee Truck as We Speak’ 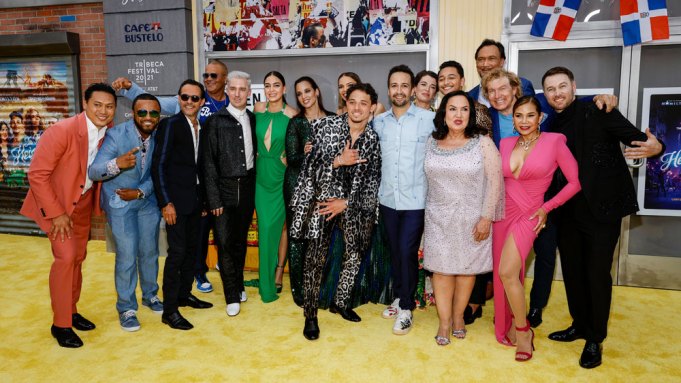 The Tribeca Festival screening of “In the Heights” on Wednesday was the first major movie event to take place in New York City since the COVID-19 pandemic.

And what a celebration it was. The festivities took place at the United Palace theater in Washington Heights.

“We deserve to have fun today,” Daphne Rubin-Vega, who plays hair salon owner Daniela in the Warner Bros. adaptation of the Lin-Manuel Miranda musical of the same name, told Variety on the yellow carpet.

Miranda didn’t have to travel far to get to the screening. “I’ve never been to a premiere so literally close to home,” he said. “It’s thrilling. This movie, this musical is a love letter to this neighborhood. You could hear the Mister Softee truck as we speak. That means the piragua guy is not far behind. I’m just so thrilled that this love letter to this neighborhood is premiering here.”

While Wednesday night’s affair wasn’t technically a premiere, because the film has already been shown at different events and released as sneak screenings in theaters on Mother’s Day last month, it was the first time the cast and crew reunited since shooting the movie two year ago. Its release was postponed for a year due to COVID.

WarnerMedia Studios CEO Ann Sarnoff exclaimed, “We’re here. We’ve arrived, coming out of the dark and into the light. It feels like the timing is perfect. It’s an amazing summer movie.”

Guests were required to show proof of a negative COVID test or a vaccination card while media covering the carpet were given rapid tests upon arrival. The 3,000-seat theater was limited to only 450 guests.

On the carpet, few people wore masks. Hugs, kisses and handshakes were plentiful. Corporate sponsorship included gift bags with boxed popcorn emblazoned with the logo of Café Bustelo. Miranda’s wife, Vanessa Nadal, even carried a customized Bustelo clutch, which is being auctioned off on CharityBuzz for the Northern Manhattan Arts Alliance. The morning after the screening, Cartier sent out a press release announcing that stars Anthony Ramos, Melissa Barrera and Leslie Grace all wore accessories from the legendary jewelry house.

“I still can’t believe that we’re here,” said Barrera, who plays Vanessa. “I can’t believe that we made it. It feels like it’s still last year and Jon was texting all of us to tell us that they were going to postpone the premiere an entire year…I’m just so happy. That’s it. I’m ecstatic.”

Marc Anthony, whose role as Gapo was created for the movie, told Variety, “I’ve witnessed this work of art…on Broadway, in many iterations and when Lin called me to invite me, he said, ‘Marc, this role isn’t in the show, but if I wrote something special would you be interested?’ How about a robust, ‘Yes!’ I think [‘In the Heights’] is a long time coming. For artists who say we’re underrepresented in Hollywood and blah blah blah, I’m like, ‘Stop whining and complaining. Make the art. Write it. Pick up a pen and write it and then do it. And be about it.’ That’s exactly what we’re staring at right now. No apologies. Lin did it and the cast is what, 95 percent Latino, the story is Latino-based…Just do it.”