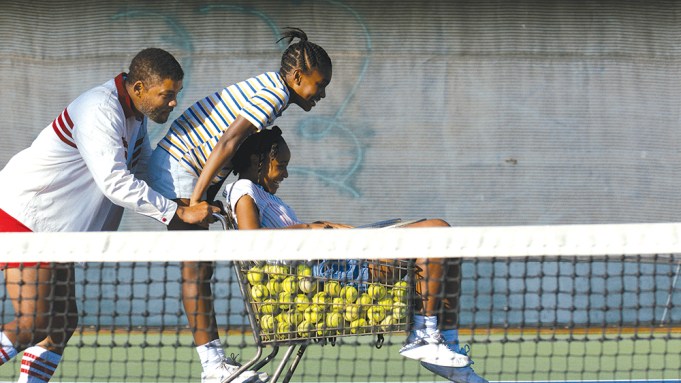 Composer Kris Bowers was the perfect fit to score Reinaldo Marcus Green’s “King Richard,” the story of how Richard Williams coached his daughters Venus and Serena Williams into tennis greats.

Bowers, whose sports-oriented work includes “Space Jam: A New Legacy,” Kobe Bryant’s “Muse” and the Netflix series “Colin in Black & White,” worked on balancing where to have clear themes for Richard, Venus and Serena, finding a family theme and scoring for the tennis games.

Since a lot of the tennis games that Venus plays in the film are without commentary, editor Pam Martin relied on Bowers to help support her cutting. “It’s very clear who’s winning and how the game is going and how close we are to the end of the game. There was a musical feel to it all,” Bowers says of how Martin weaved his score into the film.

The percussive sounds helped Bowers show how Serena and Venus changed the game of tennis.

Bowers says, “I knew I wanted to limit the sound palette to sounds that reflected the game of tennis in a somewhat literal way with strings and having felt on them. There was the prepared piano (using ordinary objects inside a piano to make it sound like a different instrument) where I was able to be really creative and use the piano as percussion. The drums come in and we feel the presence of them stepping them into their power.”

In addition to felt, Bowers used putty, nails, ping-pong balls and clothespins on his piano to enhance that percussive sound. The composer kept coming back to the piano driving the emotions of the game.

Put together during the pandemic and following COVID protocols, Bowers played to picture on a big screen rather than just record at his home studio. “I wanted to play it live while we were recording it and that required making those sounds on the day,” he says.

Richard’s theme was one of the first cues Bowers found and worked on. It was important that there was a warmth to that cue along with his stubbornness that helps propel his daughters to success. Says Bowers, “I thought about a chord that could encompass both of those things. That incessant note starts on the first chord and it’s already a dissonance; it’s already a note that doesn’t really fit in that chord but still has a warmth to it.”

He adds, “There’s a melody in that theme that I thought would be interesting to do variations on for pretty much all the other themes. It mirrored the way that Richard had this plan that he then gave to his daughters. It’s a five-note theme and it also becomes a theme for the competition scenes.”

Similarly, Venus’ theme was also inspired by Richard’s cue. It starts soft and timid. Bowers says, “By the time we hear it in the end, it’s this big orchestra, which keeps growing and swelling with her, and you feel that support.”