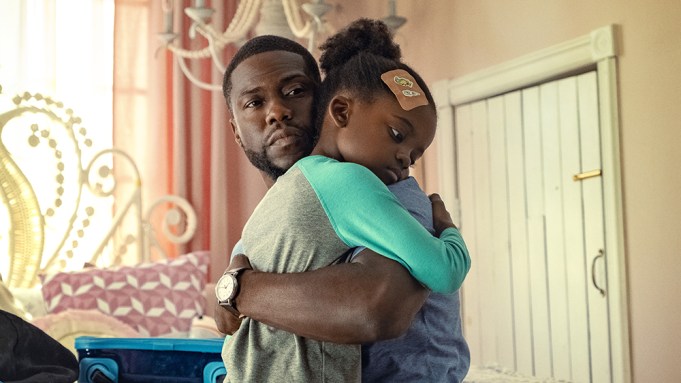 Kevin Hart drama “Fatherhood” hit No.1 on Netflix in 82 countries after releasing June 18, according to the streamer. Netflix also projects that 61 million households will have seen the movie — or some portion of it — within its first four weeks.

Timed to Father’s Day weekend, “Fatherhood” drew in viewers with a story about a dad learning to navigate fatherhood while coping with the death of his wife. Notably, the number of viewers reported by Netflix does not adhere to the conventional audience measurement tools used by traditional networks. Instead, the number of viewers is based on the amount of subscribers who watch at least two minutes of a piece of content. For “Fatherhood,” that would translate to watching just under 2% of the movie.

“Fatherhood” is adapted from “Two Kisses For Maddy: A Memoir of Loss and Love,” the best-selling novel by Matthew Logelin. Originally set up for an April 16 theatrical release by Sony Pictures, it was announced in March that the movie would instead release on Netflix. And despite Hart’s first-look film pact with Netflix, “Fatherhood” was not part of his overall deal but rather licensed worldwide from Sony Pictures.

Despite the industry gripes over Netflix’s transparency around data, the 61 million number helps illustrate the value of Hart’s overall deal with the streamer in that this project is not a splashy action tentpole — like previous Netflix hits “Extraction” with Chris Hemworth and “The Old Guard” with Charlize Theron.

Stepping outside his typical comedic role, Hart portrays Matt Logelin, whose wife Liz (Deborah Ayorinde) died just after the birth of their daughter Maddy (Melody Hurd). He works to care for her the way Liz would have wanted and is determined to tackle fatherhood alone. However, along the way he learns that raising a child and becoming a great dad takes a village and finds support from family and friends, including his boss and a new love interest.