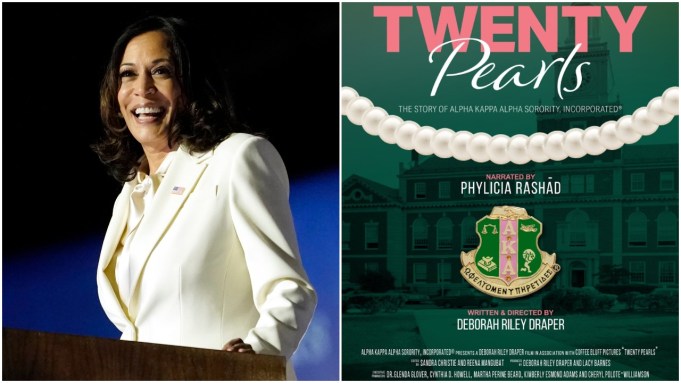 The documentary — which debuts March 26 on Comcast’s Black Experience on Xfinity channel and will be available nationwide on demand starting March 30 — is narrated by Phylicia Rashād. Both Rashād and Harris pledged the sorority during their time as students at Howard University.

As the documentary notes, observers have called the members of the Alpha Kappa Alpha sorority Harris’ “secret weapon.” But Harris’ love for her sisters is not a secret.

“I have traveled our country, and I can’t tell you how, invariably, somebody will be standing outside the room for greeting me in that glorious pink and green,” Harris says in a clip from the doc shared exclusively with Variety.

Harris continues: “It’s such a special experience that I wish for every girl and young woman to know that you are part of a sisterhood and to have that reinforced.”

“Telling our own story is essential to preserving our history and uplifting the culture,” Glover said in a statement about the film.

“Alpha Kappa Alpha Sorority, Incorporated’s remarkable 113-year journey which began on the campus of Howard University is punctuated by stories of history makers, ceiling breakers, public servants and ordinary women who have changed the course of American history,” she continued. “Through this beautifully written and narrated odyssey, this film highlights in undeniable ways the vision, courage, tenacity, determination and power of Black women while putting to bed the age-old questions about the relevance of Historically Black Colleges and Universities and the Divine Nine historically Black sororities and fraternities.”

Written and directed by Deborah Riley Draper and produced by Coffee Bluff Pictures, the film celebrates the sorority’s 300,000 members and the global impact of the organization.

“This is an extraordinary time to look back at our past to serve our future,” Draper said. “A future where Black women are centered. Helming this documentary love letter to the founders of Alpha Kappa Alpha, the generations of women that followed in their footsteps and to all Black women everywhere is an honor. This is an important history for all of us to know and understand.”

The film will premiere on Comcast’s newly launched Black Experience on Xfinity channel, which debuted last month. Endorsed by the African American Film Critics Association (AAFCA), the new platform is available to customers on Xfinity X1, Flex and the Xfinity Stream App at no additional cost.

“We’re thrilled to work with the award-winning filmmaker, Deborah Riley Draper and Alpha Kappa Alpha Sorority to bring this exclusive premiere to the Black Experience on Xfinity channel, furthering our company-wide mission of investing in and showcasing authentic Black stories and culture,” Keesha Boyd, executive director, multicultural video & entertainment, Xfinity consumer services, said. “We launched this channel to help facilitate the discovery of stories like Twenty Pearls, while providing a platform for emerging Black content creators.”

Visit www.aka1908.com to learn more about “Twenty Pearls” and watch the trailer here.