Jonathan Majors, Regina King and Idris Elba Face Off in Gunslinging First Trailer for ‘The Harder They Fall’ 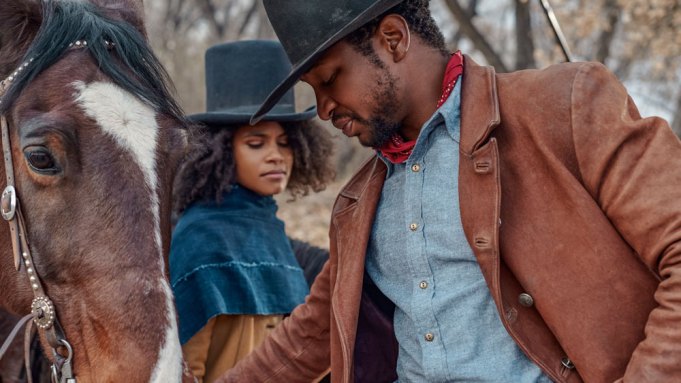 It’s a face off between Jonathan Majors, Idris Elba and Regina King in “The Harder They Fall,” and if the western’s trailer is any indication, audiences need to get ready for a dirty, dusty and dangerous ride.

The clip opens with King’s “Treacherous” Trudy Smith on horseback, as the Oscar-winner and her gang of outlaws ride towards a moving train, stopping on the track. Then, King makes quick work of the conductor, shooting him down after he attempts to call her something that begins with an “N.”

“We ain’t no nincompoops,” she retorts, adjusting her hat.

The crew then boards the train to accomplish their true goal — breaking Elba’s Rufus Buck out of his traveling cell — before turning their guns on the agents who imprisoned him.

Majors’ Nat Love is introduced midway through the clip as an avenging angel “who hunts down those who trespass against him with no mercy.” As Nat handily wins a gun duel in a church, the “no mercy” part of that introduction is quickly confirmed.

Once out of his handcuffs, Elba’s Rufus gets his licks in too, engaging in a bloody street fight, while King and Beetz show off brief glimpses of their characters’ marksmanship.

From there, the movie’s official description explains, the plot follows the tale of revenge that “has never been served colder”:

When outlaw Nat Love (Majors) discovers that his enemy Rufus Buck (Elba) is being released from prison he rounds up his gang to track Rufus down and seek revenge. Those riding with him in this assured, righteously new school Western include his former love Stagecoach Mary (Beetz), his right and left hand men — hot-tempered Bill Pickett (Gathegi) and fast drawing Jim Beckwourth (Cyler) — and a surprising adversary-turned-ally.  Rufus Buck has his own fearsome crew, including “Treacherous” Trudy Smith (King) and Cherokee Bill (Stanfield), and they are not a group that knows how to lose.

The action-packed movie is directed by Jeymes Samuel, who co-wrote the script with Boaz Yakin. The project is produced by Shawn “Jay-Z” Carter, James Lassiter, Lawrence Bender and Samuel.

Samuel, who makes his feature directorial debut with the film, is also known as The Bullitts. In 2013, he collaborated with Jay-Z for “The Great Gatsby” soundtrack and the pair re-teamed to write and produce original music for “The Harder They Fall.”

“The Harder They Fall” will debut in select theaters and begin streaming on Netflix this fall.