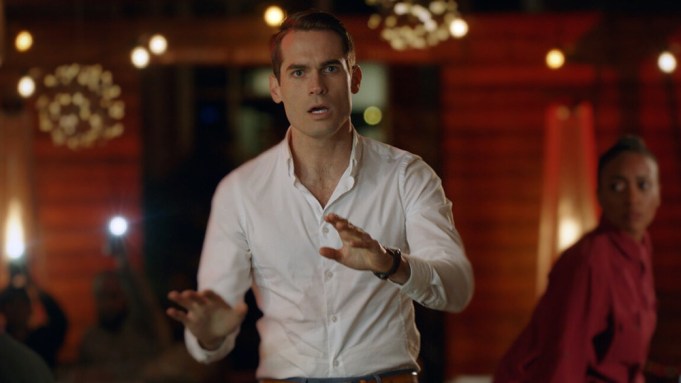 “The Beta Test,” the critically-acclaimed indie about the intersection of toxicity in Hollywood and digital culture, has unveiled an anxiety-ridden first trailer.

The IFC Films title, which played the Berlin International Film Festival this year and sits at 100% Fresh on Rotten Tomatoes, stars Jim Cummings (“The Wolf of Snow Hollow,” “Thunder Road”), who wrote and directed the film with PJ McCabe.

The satire follows an engaged talent rep who accepts a mysterious offer to engage in a consensual and anonymous sexual encounter — only to face severe repercussions as his work and home life fall apart in the aftermath. The filmmakers called the project a dark thriller about the problematic nature of the entertainment industry and humanity’s willingness to jeopardize our happiness in small and constant decisions.

The film asks the question “In the age of internet consumerism and digital tracking, does anyone truly have privacy? And can we ever truly rest without having all the answers?”

In his March review, Variety critic Owen Gleiberman said the film was a testament to “the sick soul of Los Angeles,” and that the project showcases  “the spectacular meltdown of the male ego as it gets nudged out of the center of society, and in ‘The Beta Test’ he plays an entitled alpha dick who gets the grand temptation he deserves.”

IFC will release the film concurrently in theaters and on paid video on demand on November 5.

Cummings broke out as director and star of the 2018 indie “Thunder Road,” about a police officer faces a personal meltdown following a divorce and the death of his mother. His follow-up, the 2020 film “The Wolf of Snow Hollow,” became a sleeper hit during the first wave of coronavirus lockdowns. He is repped by manager Benjamin Wiessner and Ziffren Brittenham.